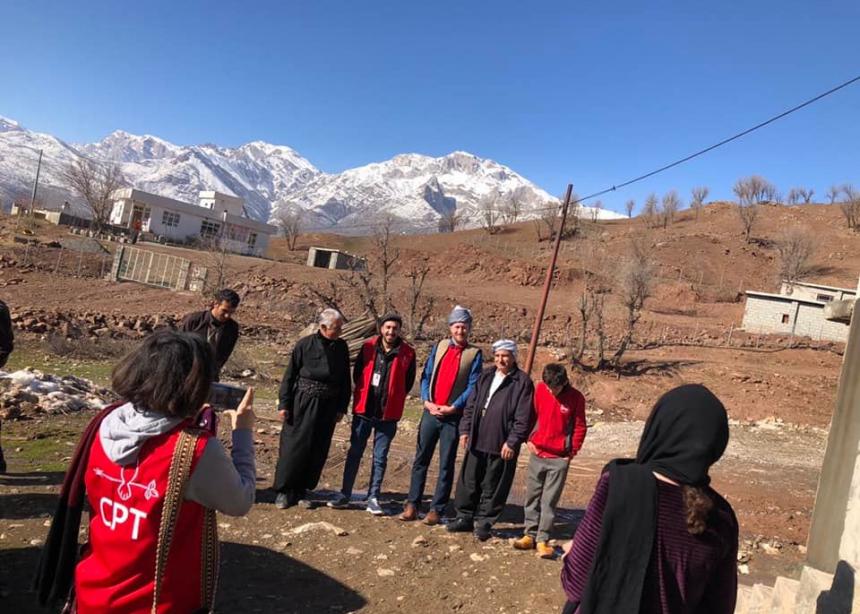 CPT Iraqi Kurdistan met with Kak Bapir and some of the villagers of Basta village from the Pishdar district on Feb. 2, 2022. Basta villagers have been partnering with CPT since 2008. Basta village is one of the hundreds of villages that have been targeted and bombed by both Turkey and Iran for a long time. CPT is working alongside the villagers to stop the Turkish and Iranian cross-border bombings. (Photo courtesy of CPT)

The organization formerly known as Christian Peacemaker Teams has changed its name, replacing the meaning of that first letter with “Community.” I have two reactions. First, the name change is good for the organization. Second, it shows that the broader church has not caught the vision of the peacemaker Jesus.

As an organization, CPT supports nonviolent peacemaking efforts in Colombia, Palestine, Iraq, Europe (focusing on migrants and refugees), and in North America in solidarity with Indigenous peoples. CPT, following the gospel, has sought to do the active work of making peace differently than the way it is usually presented in the contemporary media and movies. (Superheroes anyone?) I participated in a CPT delegation to Iraqi-Kurdistan in 2018.

The name change is good for CPT for two reasons. Many who were participating on teams and delegations, and in other forms of support for the organization, were other than Christians.

In addition, CPT works in settings and with people for whom “Christian” is confusing or traumatizing. Sadly, the name of Christ is a barrier in some contexts where it has been used to support state violence or other abuse and oppression.

The name change does not mean that CPT has left the church. CPT sees the name change as an indication of how the organization has grown because of the good peacemaking of supporters in the church.

Still, while CPT remains fervently committed to working with the church, I believe the name change is a realistic acknowledgment that the Christian churches generally have not caught the peacemaking vision that led to the creation of CPT. The crystalizing moment was the 1984 Mennonite World Conference assembly, when Ron Sider of the United States called for the peace churches to develop a 100,000-strong nonviolent peacemaking force, as well trained for peacemaking as the militaries of the world are for their own missions. This force would be ready to step into violent conflicts and stand between warring parties.

CPT set up stipended positions, as well as “reservists” who would commit a few weeks a year on one of the teams. Teachers, insurance salespeople and other everyday people-in-the-pews would follow Jesus toward transforming violence. The peace churches have generally failed to mobilize according to that original vision. Consider this: When has your congregation provided any specific training in nonviolence, conflict resolution or peacemaking?

Political scientist Erica Chenoweth has created an extensive database on the power of nonviolence. Researching hundreds of movements for political change since 1900, her database shows that nonviolence is more effective than violence. Nonviolent movements succeed in their goals to change the government or the political circumstances that oppress people more often than do violent movements. Nonviolent-caused political change also lasts longer, perhaps because the nonviolent process creates new norms of citizenship participation.

CPT hopes to remain a globally relevant peacemaking influence. In speaking of my CPT experience to many churches, I’ve noted that many Christians do not see peacemaking as pragmatic, despite CPT. So, while CPT has changed its name, perhaps the followers of the Prince of Peace—in whose name so much violence has been done—could support the work even more fervently.

Randolph Haluza-DeLay now lives in Toronto, on the land of the Haudenosaunee, Anishinabeg, Mississaugas of the Credit First Nation and Wendat.

Read more Mind and Soul columns:
On evangelization
It’s about flourishing
Reading is (mostly) good
What is learning?
What is enough? 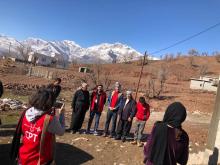 CPT Iraqi Kurdistan met with Kak Bapir and some of the villagers of Basta village from the Pishdar district on Feb. 2, 2022. Basta villagers have been partnering with CPT since 2008. Basta village is one of the hundreds of villages that have been targeted and bombed by both Turkey and Iran for a long time. CPT is working alongside the villagers to stop the Turkish and Iranian cross-border bombings. (Photo courtesy of CPT)

Randy, Wonderful summary of Peace according to Christ. Or should I say 'Violence according to the followers of Christ.' It has been long standing: From the Crusades, the Wars of Religion, to the Irish conflict and how many more. Discouraging, maybe as humans are slow learners. Let's not forget the bright lights: Francis of Assisi, Maximilian Kolbe, Nelson Mandela, Martin Luther King, Jr., Pope Francis... These offer hope on my journey through life.