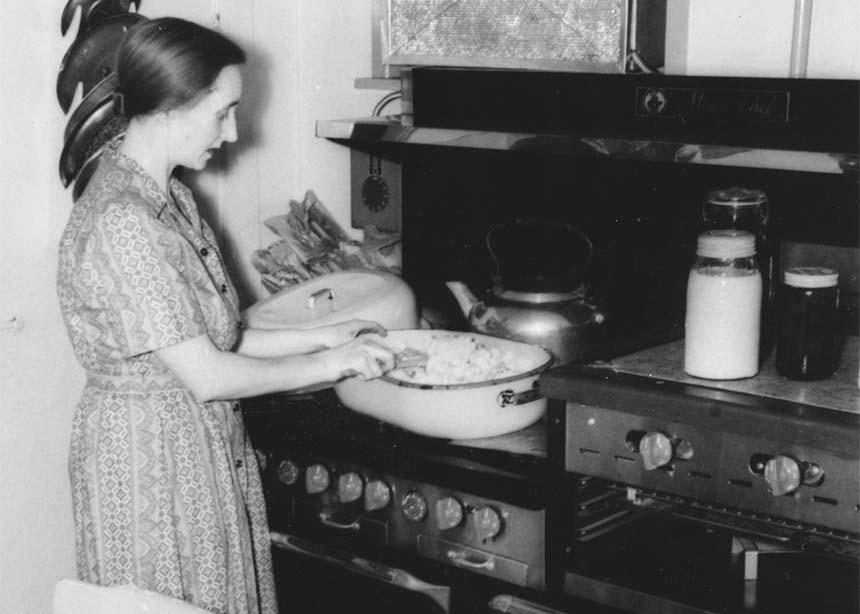 Mabel Steinman began cooking at the House of Friendship in Kitchener, Ont., in the 1950s. (Mennonite Archives of Ontario photo)

Mabel Steinman was a long-time cook at the House of Friendship in Kitchener, Ont., serving meals to the hostel residents for 26 years. She was the proverbial mother or grandmother, providing them with a touch of home, a warm meal and encouragement. She received many thanks for her home-cooked meals.

In many ways, Mabel Steinman was the matriarch of the organization, nurturing many young staffers who were starting out in social service work. In fact, I began my social-service career at House of Friendship in 1974 and often referred to Mabel as my “third mother.” In addition to my birth mother, I had the good fortune to have a close relationship with an aunt who lived with us on the farm.

Mabel also nurtured many of the men who stayed at the hostel for varying lengths of time. When difficult residents came along, Mabel would caution us not to wish the resident to leave too soon. “You never know who will arrive to take their place,” she would say.

From Mabel I learned to thank everyone who made a donation, whether the donation was big or small, useful or not. Several of us staff complained that a local church was donating leftover cold coffee from their social time after church services. At the time, microwaves did not exist and coffee reheated on the stove was unpalatable.

Mabel would tell us to thank the donor, take the coffee urn to the kitchen, pour the coffee down the drain and return the urn to the donor. Mabel reminded us that the same donor might bring something more useful in the future. Clearly, there was an attitude in the community that the men at the hostel would be thankful for anything, even if it wasn’t good enough for “regular” people.

Mabel was resourceful and would make tasty meals with whatever was at hand. One time when a lot of zucchini was donated, she decided to make a lunch of sliced zucchini and tomato sauce. Mabel apologized for that meal, as she found the mixture too watery. I thought the mixture tasted of tomato and little else.

For quite some time, the hostel received free bologna from Schneiders, a local meat processing plant. While this meat product was a regular staple added to food hampers, Mabel also made a periodic evening meal of fried bologna for the hostel residents.

In the summer, she made pies with donated peaches or apples, as well as pumpkins in the fall. This delighted both the residents and the staff, since Mabel was responsible for preparing a lunch meal for staff, in addition to preparing lunch and dinner for the residents.

Baked ham, beef or chicken were often used in combination with roasted or mashed potatoes and whatever vegetable had been donated. Mabel often prepared the plates in the kitchen, with a portion of meat, potatoes and vegetable on each, before staff handed the plates to the residents. It was well known that Mabel would evaluate the plates to ensure fairness, sometimes removing a small portion from a fuller plate in order to add to a plate with too small a portion. We would tease Mabel for this practice, but we understood that it was based on her need to keep things fair for all.

One dish that I associate with Mabel Steinman was a casserole made of leftover roast chicken or turkey, pre-cooked rice, chicken soup and gravy, with diced red and green peppers. That dinner item was offered almost weekly, often on the one day of the week when Mabel Brubacher was there helping out. I don’t know if the two Mabels had a recipe, but it is comfort food that reminds me of my “third mother.” Mabel Steinman died in 2009.

Find a recipe that approximates Mabel Steinman’s chicken and rice casserole at canadianmennonite.org/chicken-rice-casserole.

Ken Eby, a member at Mannheim Mennonite Church, Kitchener, Ont., worked at House of Friendship from 1974 to 1986. He is now retired.

This is the final installment of Gathering Around the Table. Barb Draper oversaw the collection of stories from the series’ beginning in 2016. 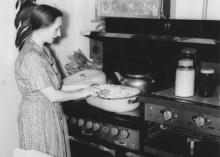 Mabel Steinman began cooking at the House of Friendship in Kitchener, Ont., in the 1950s. (Mennonite Archives of Ontario photo)