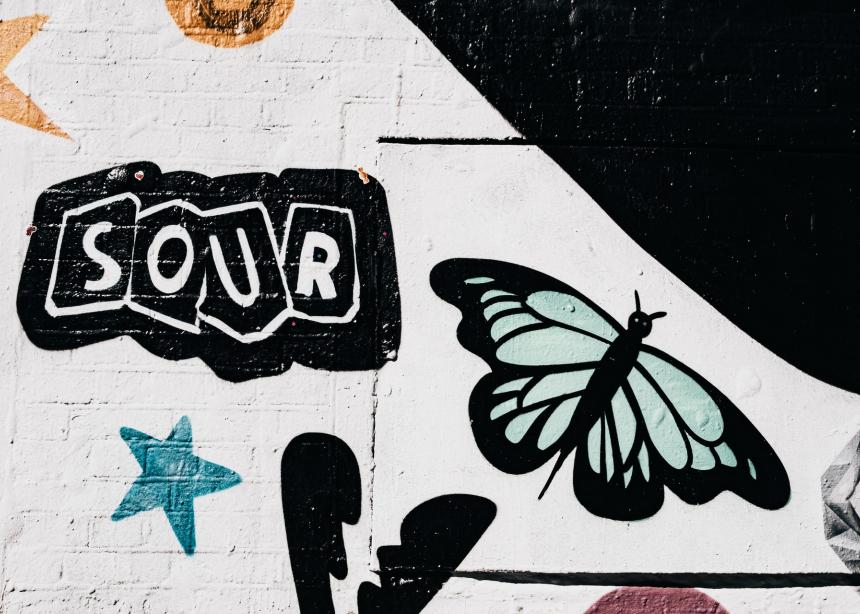 Most of the time I can’t stand typos. They bug me. If I’m completely honest, I’m internally judgmental of people who don’t catch their typos, myself included. I love words, I love Wordle, I have a knack for spelling and, when I catch something spelled wrongly, I have a hard time looking past it and focusing on the intended meaning of the misspelled word in its context. I can’t see the forest for that one silly tree. I have a problem.

But on April 29, I attended the Mennonite Church Eastern Canada annual gathering and experienced a typo that I cannot get past in an unexpected and wonderful way.

Oops! Someone had innocently made a mistake typing out the lyrics and missed it. No big deal. It happens, right? With the context of the line and the song leaders singing the correct word, it was easy for everyone to adjust, move on and forget about it. Everyone except me.

I noticed the typo, then I tried to convince myself it wasn’t a big deal. Then I realized I was outwardly singing but inwardly dwelling on this little typo. Then I scolded my secret typo-judgmentalism for kicking in.

Usually, at this point I would convince myself to move on, shake it off, extend grace to the situation, and attempt to return to some form of engagement in worship. But I didn’t. Instead, something surprising happened.

As the word reappeared for a final singing of the chorus, I was struck by the lyric in a completely different way, this time noticing the powerful truth and surprising beauty of this unintentional phrase. “I will ‘sour’ with you above the storm” was not just a misplaced vowel but, perhaps for me and others, a more honest and true statement about the way we relate to God.

I mused that, in my faith life, I seldom feel like I am soaring with God above the storm. More often as I struggle through my life, my doubts and the challenging realities of being part of the broken and beautiful church, my interactions with God are better described as souring than soaring. I sour with God within the storm.

I don’t think I’m alone in this. Reading through the Book of Psalms I find the psalmists also souring with God. Many of the psalms contain lines of complaint, or struggle, even accusation toward God. If you are struggling with God’s apparent inaction in your life, or the injustice of the world, you’ll find good company in the psalms.

The psalms have many beautiful images of God’s greatness, they tell the stories of God’s faithfulness and power, they proclaim hallelujahs and declare God’s love and goodness. But they also leave room—a lot of room, actually—for complaining, lamenting, being frustrated, questioning and doubting. I think the line “I will sour with you” so beautifully captures this holy, common and healthy, but sometimes under-appreciated and publicly avoided, posture of worship.

What began as a ridiculous fixation on a misspelled word, became the Holy Spirit breathing life into me. A minuscule error became an honest offering of worship and new language for my journeying and wrestling with God. I will continue to sour with God within the storm and invite others to do the same.

Joshua Penfold (penfoldjoshua@gmail.com) knows that a typo hear and their is probably good for hymn.

Read more Tales from the Unending Story:
Becoming the enemy you hate
A blip in the family tree
Wrestling with fairy-tale endings
Prayer and lasting
The waiting place . . .