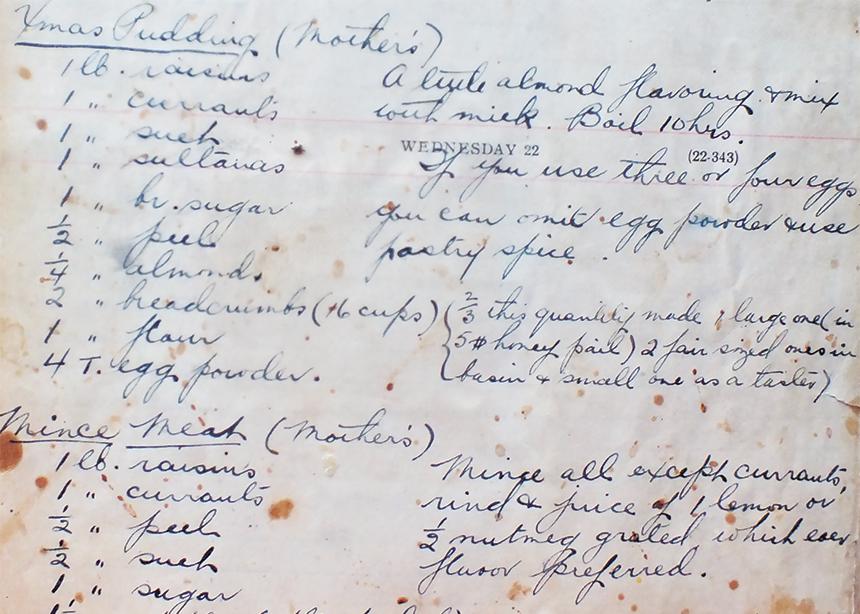 For many of us, sitting around the table with extended family is a very important part of our Christmas celebration. In my family of origin, the traditional menu included turkey and dressing, while dessert was always iced sugar cookies and fruit salad with cubes of red and green Jell-O. I’m sure each family has its own well-worn food customs. But when you become part of a new family, sometimes you need to adopt new food traditions.

At my first Christmas dinner with the Draper family, the menu was very familiar, except that dessert included something I had never had before—steamed Christmas pudding. It was served warm with a choice of butterscotch sauce or hard sauce, and was quite delicious. Since I married into that family, steamed pudding also became part of my tradition, although I’ve never seen the appeal of hard sauce. As the years have gone by, making this Christmas treat also has become part of my to-do list in December.

The recipe calls for lots of raisins, candied peel and glazed cherries. While the ingredients bear some similarity to fruit cake, the texture is quite different. My mother-in-law always put the batter into a coffee tin and steamed it in a pressure cooker, but when I took over I found it simpler to use a Bundt cake pan or a bowl. The family was gracious enough not to comment that it was no longer the traditional shape. Later, I began substituting shortening or butter for the traditional suet, and still no one complained, so I never went back to scouring the grocery stores for suet. I also cut the recipe in half.

The Draper family came to Canada in the early years of the 20th century, coming from Norfolk, England. The family of my husband’s maternal grandmother were also English immigrants who came to Winnipeg in 1902 and settled in Alberta five years later. Neither family had any background in farming, and the early years were a challenge, but they eventually found their feet.

Ethel Draper, my husband’s paternal grandmother, was married in Calgary and moved to Ottawa with her husband and baby in 1916. She must have felt quite isolated at first, far from her parents and siblings in Alberta. A few years later, she began a scrapbook of recipes, not only for things to eat, but also recipes for cough medicine, mustard plaster and salves for burns. The scrapbook is in tatters now, but I’m sure it was important to this young mother more than 100 years ago.

In the collection is a hand-written recipe for “Xmas pudding (Mother’s).” Perhaps each year when she made this dessert she thought about her mother and her far-away family, because travel between Ottawa and Ponoka, Alta., would have been rare. The recipe certainly is large enough to feed many relatives; a note with the recipe says it will make a five-pound honey pail size, and two fair-sized puddings in basins.

When the Draper family gets together around the table for a Christmas meal every year, we are following a long family tradition. My mother-in-law did not use her mother-in-law’s recipe, probably because she needed things measured in cups rather than pounds. The recipe handed down to me came from “Aunt Nancy,” a family friend who was an English war bride. I’m sure it, too, is an old recipe, because the instructions say to dissolve the baking soda in a bit of water. The Drapers were teetotallers, so the pudding was never doused with liquor and set afire, and the hard sauce did not include brandy.

This year, the extended Draper family will not be gathering around a table at Christmas, but the pudding is made and will be shared with each household. The future of this tradition is not clear because my children do not care for Christmas pudding and their cousins are somewhat ambivalent. They much prefer the cookies that are also on the table.

We are blessed with so many good things to eat and we all have our own preferences. As someone descended from a long line of Swiss Mennonites, I think it is interesting to be part of a multi-generational tradition of serving old-fashioned steamed pudding at Christmas.

Find the Christmas pudding and sauce recipes at canadianmennonite.org/christmas-pudding-recipe. 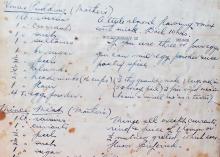 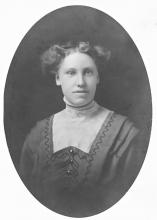