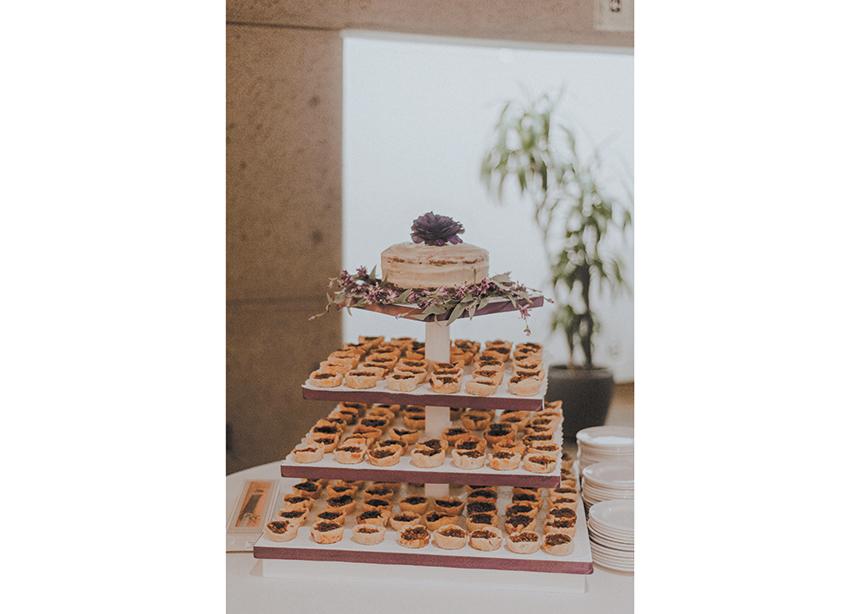 For his daughter’s wedding, Barry Reesor made a tower of butter tarts. (Photo courtesy of Barry Reesor)

Barry Reesor is widely known for the generosity with which he shares his famous homemade butter tarts. He calls it his “butter-tart ministry.”

Although he is a computer guy who works in network infrastructure, he also enjoys baking, and the coworkers at his office frequently benefit from his big heart. They recognize the white container that he carries the tarts in, and they are known to lobby him for a taste whenever they see it. Barry is fair-minded so he restricts them to one tart per person, although in very special circumstances they can take one home for their partner.

In the fall of 2019, Barry and his wife, Lori Guenther Reesor, were interviewed in a video produced by Abundance Canada, in which they talked about their approach to generous giving. When it came time to launch the video, Barry brought along some butter tarts to share with the gathering, including the crew. They were a big hit. The videographer took a bite and said appreciatively, “I’m being ministered to.”

Because Lori eats gluten-free food and their son is allergic to eggs, Barry’s family cannot eat his famous tarts, and that’s how he got started giving them away. Each Christmas, his neighbourhood in Mississauga, Ont., gets together for a Christmas party, and Barry’s tarts are eagerly anticipated. Last Christmas, they disappeared so quickly that he decided to run home to refill the plate.

The year that Barry’s daughter Emma became engaged, he brought butter tarts when they went to visit his daughter’s future in-laws. Now they expect butter tarts every year. At Emma’s wedding, Barry made 150 tarts and put them on a custom-made stand as a showpiece. Later that year, he also made butter tarts for a co-worker’s wedding—he just changed the ribbon on the tart stand to match the colour scheme.

For many years, Hamilton Mennonite Church hosted a Ten Thousand Villages sale and Barry would make tarts each year to help raise funds.

As happens with an experienced baker, Barry has learned to modify his recipes through trial and error. Although butter tarts are his signature food, he often makes cherry tarts so that his son can enjoy them. He has experimented to the point where he can also make gluten-free pastry.

To make sure that the quality of the food he shares is always consistently high, Barry has some tricks of the trade. One year he received a marble rolling pin for Christmas and that seems to work well. He has discovered that a plastic cutting board or silicon mat works for rolling out the dough thinly. The texture on the board traps a small amount of flour that keeps the dough from sticking.

He usually makes the pastry a day in advance and stores it in the refrigerator to keep it cold before rolling it out. If he doesn’t have time to do that, he puts it in the freezer for a few minutes while he assembles the filling ingredients.

Connecting with others and building community work well when there is food to share, and Barry has discovered that he can share God’s love through his butter-tart ministry.

With files from Lori Guenther Reesor.

The recipe for these butter tarts can be found at canadianmennonite.org/butter-tart-ministry. 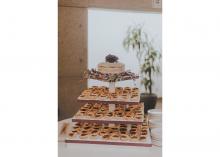 For his daughter’s wedding, Barry Reesor made a tower of butter tarts. (Photo courtesy of Barry Reesor)