The sweet solace of polarization, Part 3 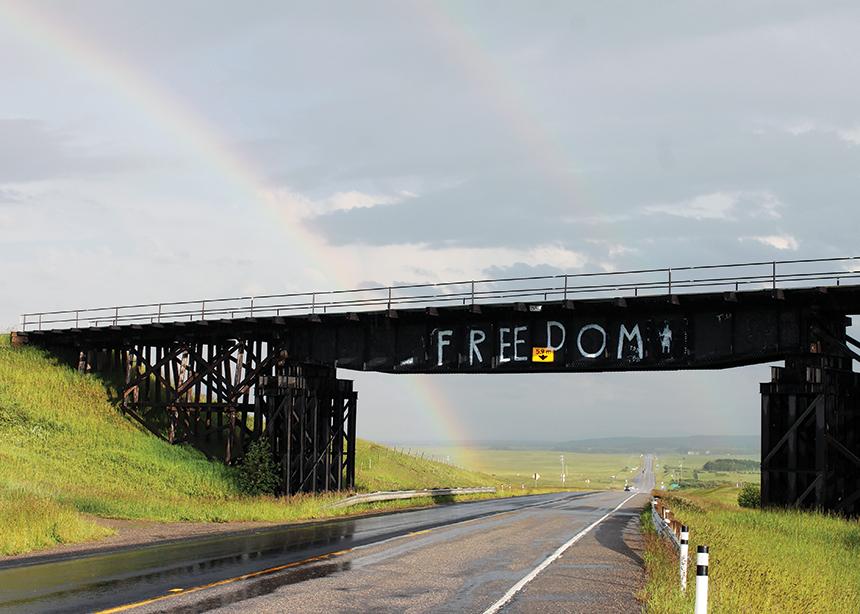 A bridge over Highway 6 near Twin Butte in southern Alberta, 2022. (Photo by Will Braun)

I’m nervous about presenting non-orthodox views about COVID. Some of my mandate-abiding friends will look askance.

Rigidity was a spiritual variant of COVID. Questions became unwelcome. A singularity of narrative prevailed, spawning a minority reaction.

The pandemic changed the complexion of society. At this point, can we talk constructively across the lingering divide? Can we find middle ground? Do we even want to? And what of the humble Beatitudes?

Some mandate-resistant people I spoke with pointed me to a speech Don Plett delivered in the Senate on Feb. 23. Plett, who attended a Mennonite church most of his life, is leader of the Conservatives in the Upper Chamber. By reputation he is a partisan scrapper.

I was leery as I hit “play.” But Plett celebrated Canada’s high vaccination rate. He declared that he was triple vaxxed and encouraged “everyone else to do the same.”

He said the views of some vaccine resisters “fall squarely in the camp of conspiracy theorists,” and after the trucks had been in Ottawa a couple weeks, Plett was among those who said, “Hey, it’s time to go home.”

Ironically, these views contradict the people who suggested I listen to Plett.

He also said government measures “exacted a huge toll.” People endured isolation and died alone. And penalizing people for not getting vaccinated was, in his view, “extremely offensive.”

He said that if we accept that Canada is not homogeneous, then we must “strive to protect people’s rights to freedom of conscience, freedom of religion . . . freedom of vaccination status.”

He referenced a Sept. 17, 2021, French language interview in which Justin Trudeau said many of the strongly vaccine-resistant Canadians are “often misogynist” and “often racist.” Trudeau then asked, “Do we tolerate these people?”

“Yes, there were idiots with racist views in this group,” Plett said of the protesters, but if you paint them all with a single dismissive brush, “you miss the point.”

The point, for Plett, was that these protesters represented millions of Canadians who were “tired of being controlled” and wanted “a way out.”

“We have not done a good job of listening to the voices of those who have a different view than us on vaccination,” Plett said.

“The primary debate,” he continued, “is not about whether these measures are right or wrong. It is about whether someone can have a different view, for whatever reason, and not be censored.”

In this age of inclusion and cancellation, peace churches need to grapple with this. Plett was one of a few leaders to straddle the divide.

Another person who did not fit neatly into one camp was Dr. Sheila Singh, a pediatric neurosurgeon and Senior Canada Research Chair at McMaster University in Hamilton, Ont. I heard her on CBC radio’s White Coat, Black Art. She talked about harm caused by COVID restrictions; in her case, children coming in with dangerously advanced cancer because they had been too afraid to come to the hospital earlier.

“I have been so frustrated by our apparently single-minded focus on a single viral illness throughout the pandemic,” she wrote back. “In my mind, public health is about the whole health of a society, and health is clearly multi-factorial, and should never be reduced to our response to a single disease. We are going to pay a steep price for all the collateral damage caused by COVID restrictions.”

Singh, who fully supported vaccination, said she was surprised at “how much moral weight” people attributed to things like wearing a mask, and how little people were “willing to welcome other viewpoints . . . acting with almost religious fervour to uphold current public-health measures even if they [were] debatable.”

She said, “There is no way we managed the pandemic perfectly, so there should be lots of room for criticism and accountability.”

Tellingly, it was rare to hear someone on CBC diverge even this much from what Singh called “pandemic orthodoxy.”

Some people were forced to cross the COVID divide. Andrea Moses Cooper chose to do so with a measure of grace. She is a hairstylist and friend. She was highly conscientious in terms of COVID precautions, but a quarter of her clients were the opposite. And they were not shy about it.

What she heard was religious people who were looking for an “opportunity for martyrdom,” a chance to take a risk for faith. They felt the church was unfairly targeted and some wore this “persecution” as a “badge of honour.”

One client sent her a link to a sermon by a conservative Mennonite pastor in Winkler, Man., who said Christians must not receive nor administer the COVID vaccine because it contained cells from an aborted fetus.

Moses Cooper was alarmed. So she called the pastor: “Why not just ask him why he said what he said instead of being angry about it?”

The pastor was happy to explain his views, she reported. He did not dismiss her. Although the half-hour conversation was “draining,” Moses Cooper felt good that she had “gone to the source.” A rare approach. Moses Cooper said of her clients: “I try to listen, to hear, even if it’s exhausting. . . . I try to be kind. I try not to roll over them, even though I want to.”

Admitting she is “not a saint,” she talked about her “internal screaming” as she politely listened to clients: “I’m surprised no one can hear it.”

For Jen Wiebe, the division hits even closer to home. Like me, she lives in the Rural Municipality of Stanley in southern Manitoba. Stanley had the lowest vaccination rate of any Canadian jurisdiction I could find.

Wiebe—whose real name Canadian Mennonite has agreed not to use due to the sensitivity of the subject—is a stay-at- home mom in her 30s. She grew up strictly Christian and strictly “anti-vax.” In fact, the COVID vaccine was the first vaccination of her life. In her family and church, women were taught not to think for themselves. Conspiracy theories and fear were part of life.

In her 20s, Wiebe realized she needed to take responsibility for her own views. It was a gradual, difficult process. Now she is the person who is “furtherest left” in both her extended families. She has lost friendships over COVID disagreements.

Still, she has opted for grace over vilification. “I understand where people are coming from when they think differently,” she told me by phone. “I try to ask questions.... I never outright dismiss [their views].”

She said people on the left sometimes take a really strong stance. “That’s not the way to do it. . . . I’ve never changed my mind based on someone telling me what to think.”

Wiebe talked about a different kind of change. She said of any given conversation with a person of differing views: “If nothing else, it gives you a bit more compassion and empathy.”

In some settings, adherence to mandates became a litmus test of faith. Good Christians wear masks. Or don’t. Often the pursuit of truth and rightness eroded compassion and empathy, arousing disturbingly virulent feelings. Middle ground was vacated. Many of us retreated to the comforting refuge of polarization, lulled by the echoing voices that we were right and others were pathetically wrong.

To the degree we can emerge from those false refuges, we may encounter divine grace and neighbourly love. And the only path out is that of listening.

Don Plett said, “We need to do better at listening.” And to listen is to adopt a humble posture. As Jen Wiebe so wisely said, “People have lost the art of humility.”

Ironically, it was Justin Trudeau — the main nemesis of mandate-resistant Canadians (and Plett)— who said something that has helped me listen to members of the maskless majority in the heavily Mennonite area I call home. On the night he was first elected prime minister, Trudeau said, “Conservatives are not our enemies, they’re our neighbours.” While he may betray his own words, they still describe my literal reality and my Christian hope. 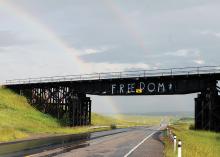 A bridge over Highway 6 near Twin Butte in southern Alberta, 2022. (Photo by Will Braun)