The sweet solace of polarization, Part 1 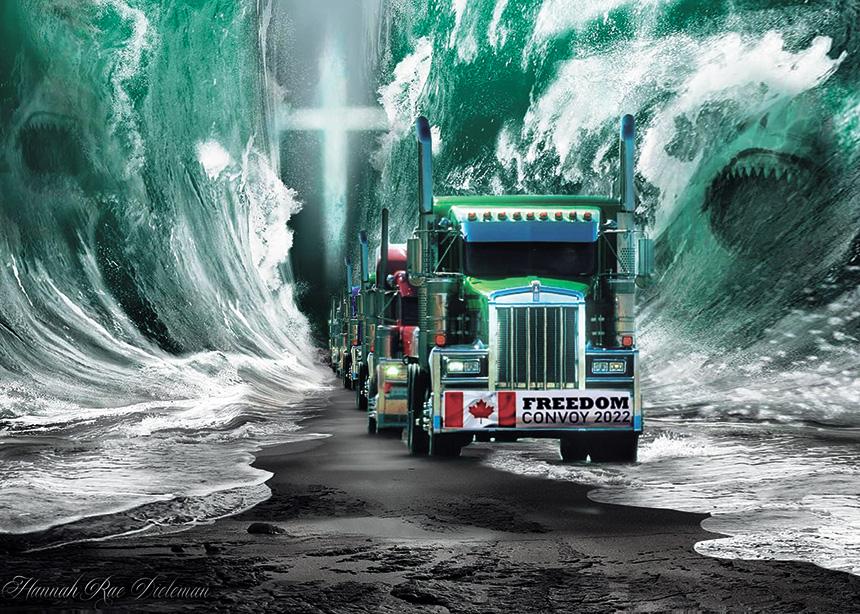 I knew I would eventually have to interview my neighbours who staunchly resisted COVID-19 mandates and proudly supported the Ottawa trucker convoy. Actually I have many such neighbours. But it took a year of working through my pandemic enmity until I was ready to listen to them.

Some readers will see more danger than value in such interviews, so let me explain my motives.

I live in the Rural Municipality of Stanley, an area 18 miles square (we don’t use kilometres here) in south-central Manitoba, adjacent to North Dakota, both geographically and ideologically. Stanley is home to big farms, bigger businesses and many Mennonites, some in villages more or less transplanted from Ukraine generations back.

It is also arguably the most right-of-Conservative corner of Canada. The vaccination rate here maxed out at 23.4 percent, lower than any other jurisdiction I could find. Furthermore, Stanley is the most libertarian niche of the federal riding in which the People’s Party of Canada received a higher percentage of the vote than anywhere else (21.6 percent), although not enough to upend Candice Bergen, who later became interim leader of the Conservative Party.

For a CBC-listening lefty like me, Stanley was a tough place in which to ride out the pandemic.

I recall a too-typical moment in my year of indignation. As I made my way from the snow shovel aisle at the Canadian Tire in Winkler—a city surrounded by Stanley but not part of it—to the check-out line, I wallowed in ill thoughts toward the many maskless shoppers around me. Even otherwise obedient Mennonite women in dark dresses and neat head coverings embraced full-blown civil disobedience.

I was surrounded by simple-minded, small-hearted and spiritually stunted people, and they were in the majority.

Where I live, maskless shoppers were common throughout the pandemic. At many farm or construction-related businesses I went to, most—or all—staff and customers would be unmasked.

At best, I’m prone to anger. And self-righteousness. Plus, I was at a low point in life going into the pandemic, so the fact that most people around me were flagrantly ignoring the recommended precautions made my insides boil.

Among like-minded friends I joined the venting, ranting and recounting of stories of our neighbours’ backwardness. The report of someone showing up at the local hospital with an ivermectin-diesel fuel poultice topped the list. Unverified, of course. And unhelpful.

This was not healthy. I would tell my wife I needed to find grace again.

Then, one day, my anger blew itself out. Mostly, anyway. Unvaccinated friends wanted to get together. My blood pressure spiked—another round of awkward negotiations with no good options.

In the moment, I just suggested we invite them over for supper. No caveats, no limitations. Just an open door and an open heart. That seemed more important than compliance. It was a turning point. I was tired of anger and the divisions and the unwavering, sometimes arbitrary, strictures.

But more than anything, I was just tired of being mad.

Not long after my shift, I contacted my favourite vaccine-resistant neighbours. I arranged an interview and got other leads. I started poking around the pro-convoy corners of the internet. I talked to one of the main organizers of the Winnipeg trucker convoy. I talked to a Winnipeg firefighter who was not a fan of vaccines or the truckers. I talked to a local hairdresser who hears it all. I called a neighbour for whom the COVID-19 shot was the first vaccine of her life. I emailed a highly regarded doctor who was one of very few voices on CBC that questioned “COVID orthodoxy.” I listened to the 88-minute speech that Don Plett, leader of the Conservatives in the Senate, delivered in Ottawa.

In an era in which it has become increasingly acceptable to categorically cancel or write off people with views deemed regressive, I did the exact opposite. I sought to understand the people toward whom I felt enmity. I wanted to connect, understand and then accurately report their views, which I will do in Part II of this series.

I purposely mentioned my efforts to mandate-inclined friends, to test their responses. A few were intrigued. More were impulsively defensive: Why would I do this?

I did it for my heart. I knew that if I spoke with anti-mandate people I would realize I was less right and they were less wrong than my in-house narratives allowed. I would move toward grace.

Plus, I’m genuinely curious about what people believe, and why. And I like to be surprised. (I was not disappointed.)

Plus, we are to love our enemies. Whatever that means, it is surely a posture profoundly different than that of cancel culture, which is seeping into the church. Somehow we are to trust that God will honour a counter-intuitive approach to those toward whom we may have harsh thoughts.

I was nervous before each interview. Part of me resisted. Part of me wanted to dismiss all convoy supporters, reading too much into the white supremacist narrative that many media outlets jumped on. A blanket dismissal would have offered relief to my mind and comfort to my ego. Polarization always tempts us with such rewards.

Upon dispersing from Ottawa, some truckers and supporters made their way west, holding small rallies along the way. And so the horns blared just outside the windows of the building in Morden, just down the road from Winkler, where I was participating in a meditation class. We stopped and watched the dozens of vehicles pass. The sign on one car window read, simply, “F--- you all!” Another read, “I love you, but f--- off already.”

Unlike my sharp feelings in Canadian Tire a couple months prior, I could chuckle at the bits of unfocused hostility, knowing that my heart was capable of similarly indiscriminate animosity. I admit I reverted to a touch of mockery—I’m no saint—but something inside me had shifted. And I knew in my soul that that shift was of God.

Related stories:
The sweet solace of polarization, Part 2: Talking to the unvaccinated 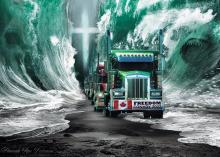 I was hit as part of the polio pandemic. July 1953. Four months later the polio vaccine arrived. I do not remember any resistance. The disease has been essentially eradicated globally with the exception of a few Asian countries that could not afford the vaccine.

I appreciated your article and I am looking forward to part 2. I have taken all four shots—certainly for my own protection, but significantly for reasons of protecting my neighbours.