The sweet solace of polarization, Part 2

Talking to the unvaccinated 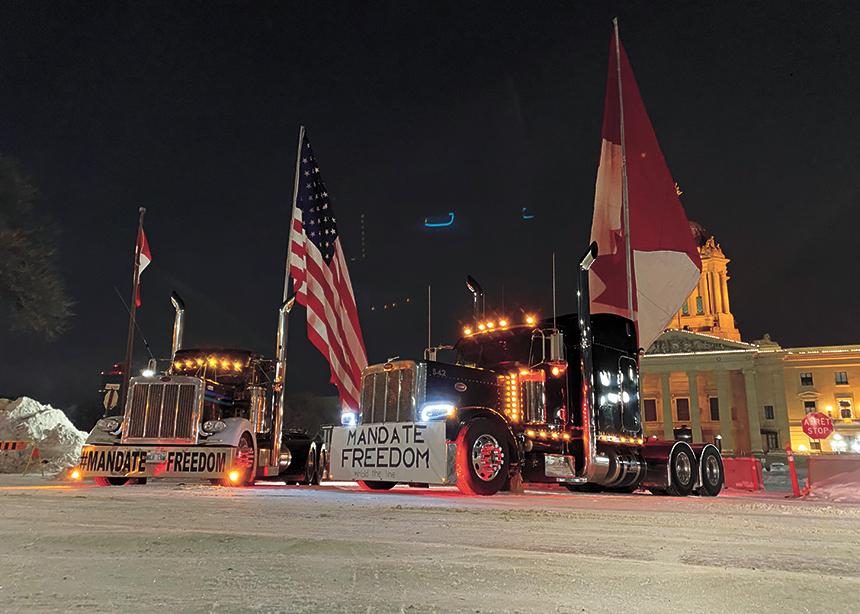 Trucks at the Manitoba legislative building. (Photo by Rick Wall)

Caleb Brown was a lead organizer of the Freedom Convoy protest outside the Manitoba legislative building last winter. I asked how he responds to people who dismiss all protesters as white nationalists. I asked how he felt about people who drove by and gave him the finger, as one of my friends did.

To back up, this started with me—a triple-vaxxed, “we’re-all-in-this-together” resident of the most mandate-resistant part of the country (the Rural Municipality of Stanley, in southern Manitoba)—choosing to put aside animosity toward my maskless neighbours and try to understand them. I told this story in Part 1 of this series.

I began my quest with Dean and Tiina Hildebrand, my favourite mandate resisters. The Hildebrands were organic beef farmers a few miles south of my family’s farm. They have been warm and generous neighbours. Tiina had been active online in support of the People’s Party of Canada and the trucker convoy, but we’d never talked politics. Until last March, when I spent two hours at their kitchen table discussing masks, media, Trump, Trudeau, health and how to discern truth.

Sadly, in July, Tiina died as a result of cancer at age 57. This is not the time to report on our conversation other than to say we had a candid, respectful, congenial and relatively relaxed exchange. We got to know each other better. I’m glad I got to a point where I could listen to them. And I am grateful they were willing to talk.

I spoke with Brown, a Winnipeg carpenter, by phone in March. Given the uncertainty around long-term impacts of vaccines, he felt people should have been free from repercussions if they opted out. “We’ve seen nothing short of coercion,” he said.

Brown felt there was no room in society for the questions and concerns he had. “The landscape was looking pretty hostile to anyone asking questions counter to the mainstream narrative,” he said.

His tone was not sharp. He lamented added screen time for his kids and the isolation they, like others, endured. He recounted his 14-year-old son’s successful tryout for a club sports team. He was told he could not play unless he was vaccinated and could not practise unless he tested regularly. The Browns agreed to the testing, but the team doubled down and insisted on vaccination. “Loving your neighbour is getting vaccinated,” team officials said.

“Given the situation, they did what they felt was best,” he said of the team.

He calmly mentioned people who drove by the Winnipeg protest and gave protesters the finger. “I wish they could understand why we were there,” he said. He expressed appreciation for the people who did engage in conversation.

“I admire their courage,” he said. Although such conversations do not necessarily change people’s overall beliefs, Brown said they are “rarely not transformative.”

That’s why I was talking to him. I wanted to transform my enmity toward the mandate-resistant.

And what about people who dismiss all convoy participants as white nationalists, as I had been tempted to do?

“I would ask those people if they actually came downtown and talked to a single person,” he said. “Do they know any of these [protesters] personally?”

Brown, who spent six days in Ottawa at the beginning of that protest, said he felt the Winnipeg protest did a good job of respecting the rights of others. Honking was controlled. They moved when the police asked. Winnipeg police spoke well of the organizers.

Brown and his co-organizers sent a letter to Manitoba church bodies—including Mennonites—in which they said, among other things: “We condemn all manifestations of hate, racism, misogyny and disrespect.”

Brown’s fellow protester, Paul Bigras, was listening in on our call. Both men speak freely of their faith. And both are concerned about division in society. Bigras shared about the value of “seeking to understand before being understood.”

“If you dismiss, you divide,” he added.

Bigras, who has two kids who did get vaccinated, also said: “I spent a year being frustrated and upset, and it did nothing.”

Like Brown and Bigras, Winnipeg firefighter Bob Evans—whose real name Canadian Mennonite has agreed not to use because of potential ramifications for family and work relations—is a man of conviction but not dogma.

“I understand that most people are willing to take the chance on the currently available vaccines . . . ,” he wrote in a statement to his employer. “My experience has led me to choose otherwise. . . . I am more comfortable waiting for a traditional attenuated vaccine.”

Like Brown, Evans had questions: Who created the vaccine? Who profits from it? Where are the long-term study results? Didn’t the pace of vaccine development seem too fast?

He noted that Pfizer was guilty of the largest health-care fraud in U.S. history, paying US$2.3 billion in 2009.

He also knew numerous people who had disturbingly negative reactions to COVID vaccines. His own kids had dangerous reactions to childhood vaccines.

He also believes he contracted COVID in January 2020, prior to testing regimes, and is confident he developed natural immunity.

Rooted in his experience and faith, he took a “wait and see approach” to vaccines.

When asked about the convoy, he was hesitant. “I would just say I was in support of removing all mandates,” adding that he would never want to be associated with the “F--- Trudeau” signs that were prominent in Ottawa.

Similarly, Brown said those signs “are not going to heal any divide.”

I confess that Brown, Bigras and Evans were more reasonable and open than I expected. As was Debbie Chikousky, who farms with her family about 100 kilometres north of Winnipeg.

The Chikouskys were all in at the beginning of the pandemic. “We listened to Trudeau every day,” she said of the prime ministerial briefings. “We were proud to be Canadians.”

Chikousky’s husband and child have significant health concerns, including auto-immune issues. She knows the health system and the alternative-health scene. She talks to nurses, immunologists and virologists.

“Our medical freedom is extremely important to our family,” she said. “A person should never be denied, or forced into, a medical procedure.”

She means it. “I support people 110 percent who chose to get the vaccine,” she said. “I’m not an anti-vaxxer.”

But she is someone who has seen a lot of negative vaccine side effects. She lost faith in government information.

And she became “disgusted” at how government “started to stomp all over” people’s rights, and how people “got turned into two classes.” She says of the oversimplified divisions: “It was never true.”

In her community and beyond she saw people “thinking they’re better than everyone else because they got the vaccine.”

I know that feeling.

She also talked of someone who needs to wear a mask due to severe allergies getting shamed. It goes both ways.

“How do we get [people] to love each other again?” she asked.

“Forgiveness is going to be needed,” she said, “on both sides.” And maybe some people will have to “forgive themselves” for the thoughts they had about their neighbours.

Talking to these four fellow-Manitobans made that easier.

The sweet solace of polarization, Part 1: An unlikely COVID conversion 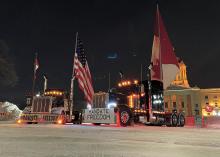 Trucks at the Manitoba legislative building. (Photo by Rick Wall)

While the protest organizers may have believed they did a "good job of respecting the rights of others" and that "honking was controlled," I'm afraid that's revisionist history. The protest included honking at all hours and protestors setting off fireworks at night for about a week and a half until a large counter-protest was organized where local residents expressed their experience of feeling unsafe in their own neighbourhood.

People live close to the protest site, including folks who had just moved into subsidized housing in a new building that I worked on. It's only after that protest and the escalating confrontations with locals that the honking was restricted.

Here's a CBC article about that time. Check out the kid with the sign asking to get their bedtime back: https://www.cbc.ca/news/canada/manitoba/winnipeg-convoy-ledge-saturday-1...

I don't know what the path forward is here, but pretending this was all done in a polite, civil,and thoughtful way probably isn't it. Moving forward to "love" without apologies denies the very real work of repair that's required - and incomplete.

Thanks for your comments, Matthew. Surely many others share your sentiments.

You rightly identify a soft spot in my article. With more time and space I would have liked to push questions about the nature of the protests themselves. I don’t mean to pretend they were anything other than what they were. In any case, I believe the path forward involves a posture of listening, though that may feel super counter-intuitive.

When we are right and they are wrong, it makes no sense to listen. Except that they feel the same way, so we just end up yelling (mostly into our respective echo chambers) and nurturing stories that further the othering. It’s a stalemate of two sides waiting for the other to come to their senses, or make the first move, or relocate to Mars.

What is in my heart is to invite people to this transformative, counter-cultural, risky, scandalously paradoxical space of turning toward the other.

Polarization offers the sweet solace of being right, being better. Scripture offers something greater than rightness.

I challenge the impulse to dismiss the other. There are many reasons to discount, reject, refute, and silence people on the other side of the COVID divide. I spent much of the pandemic rehearsing those, with enmity in my heart.

But when I finally found it in my heart to sit with my dear Trump-loving neighbours—as opposed to just spinning counter arguments in my head—something changed in me. I did not stop standing up for what I believe. My basic position did not change. But my heart did. That's a step in the work of repair.

“Do justice, love mercy and walk humbly….” The three go together.

"The line separating good and evil passes not through states, nor between classes...but right through every human heart." —Solzhenitsyn