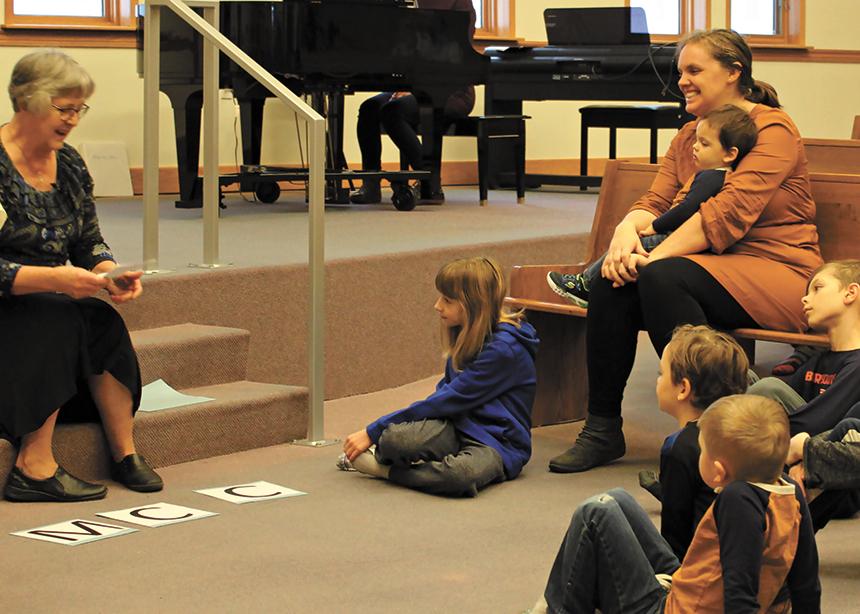 Kathy Braun, left, tells the children at Osler Mennonite Church that it takes a lot of people to do the work of Mennonite Central Committee. (Photo by Adeline Cox)

This year marks the 100th anniversary of Mennonite Central Committee (MCC), and one Saskatchewan congregation got off to an early start in celebrating it.

Friesen said, “It was a typical Sunday morning service,” with the focus being on giving thanks for MCC’s 100 years.

Children’s feature presenter Kathy Braun demonstrated that the work of MCC is a group effort. Prior to the service, 25 individuals of all ages received a piece of paper with a letter of the alphabet printed on it. They were asked to come forward and use their letters to spell the words “Mennonite Central Committee.”

“Osler is one of our churches that is thoroughly integrated with MCC,” said Klassen Hamm. “If someone asks me what MCC does, I could tell them that it’s what Osler Mennonite does.”

In her sermon, Klassen Hamm offered three reasons why MCC shares God’s love and compassion with the world:

After the service, the congregation snacked on buns and hot cocoa, a tangible reminder of some of the very first relief work that MCC did.

In 1922, MCC volunteers set up feeding kitchens in southern Russia (now Ukraine) to feed Mennonites and their neighbours who were facing starvation because of war and famine. Twice a week the people received hot cocoa with their buns in order to get the 790 calories they needed to survive.

What was much needed sustenance for those Mennonites was just a snack for the Osler congregants, and they carried their buns and cocoa back into the sanctuary for the Sunday school hour, where they shared stories of their MCC experiences.

Lloyd and Loretta Sawatzky went to Switzerland as a young married couple with MCC’s Intermenno Trainee Program. They spoke about how profound it was for them to visit historical Anabaptist sites in that country.

Closer to home, Charlie Clark talked about his two years with MCC in inner city Winnipeg as part of a restorative justice program at Menno Simons College. And Kaytee Edwards Buhler described her work with the MCC-sponsored Appleby Kids Club in Saskatoon.

Friesen said that hearing people’s stories was powerful. “One person said, ‘I served 25 years ago but I’m still processing that experience,’ ” Friesen said. “[Another] said, ‘I have MCC in my blood.’ It’s how she shops, how she eats, how she gives her time. . . . I get choked up talking about it.”

Recognition of MCC involvement carried over to the noon potluck meal, during which participants were asked to sit at the table that best reflected how they support MCC. Tables bore signs reading, “I served with MCC Canada and U.S.,” “I make comforters,” “I shop at the thrift store,” and, “I eat at the MCC sale.”

“There was a high level of engagement and recognition of each other’s stories,” said Klassen Hamm, praising the congregation’s plans to compile their MCC stories into a book. “I would really encourage other congregations to celebrate in ways that fit with their experiences,” she said. 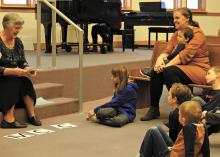 Kathy Braun, left, tells the children at Osler Mennonite Church that it takes a lot of people to do the work of Mennonite Central Committee. (Photo by Adeline Cox) 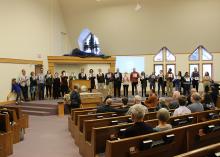 Holding up letters that spell Mennonite Central Committee (MCC), members of Osler Mennonite Church demonstrate that the work of MCC is a group effort. (Photo by Adeline Cox) 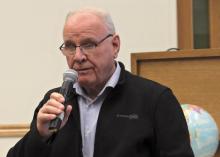 During the Sunday school hour, Jake Buhler recalls the 20 years he and his wife Louise, spent under MCC in Vietnam and Thailand. (Photo by Adeline Cox) 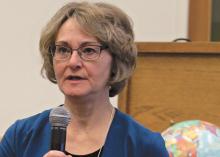 Loretta Sawatzky reflects on her year of service under the Intermenno Trainee Program with her husband Lloyd in Switzerland. (Photo by Adeline Cox)