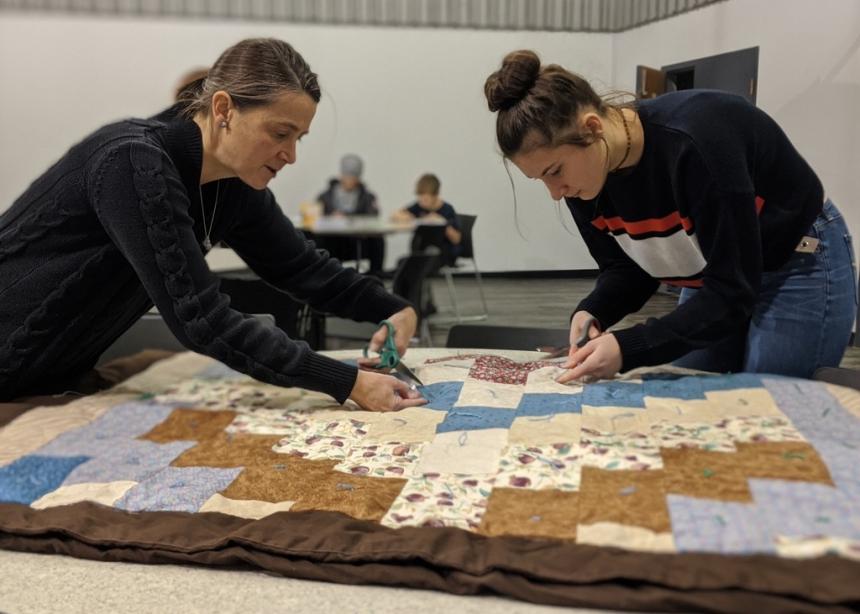 On Jan. 18, the forecast in more than 100 locations across three continents was identical: flurries of comforters.

Despite heavy snowstorms in some areas, thousands of people gathered to sew comforters during The Great Winter Warm-up, a comforter making event organized by Mennonite Central Committee (MCC). Groups met across Canada, the U.S. and Europe with a goal of creating 6,500 comforters to distribute to people affected by disasters and conflict around the world.

Together, the participants not only met but surpassed the original goal. They set a record of more than 9,400 comforters donated to MCC.

One group in the Netherlands had so much fun that they planned to meet and create comforters on a regular basis afterwards. At another event in Winnipeg, Man., one group decided to time themselves in order to create comforters as efficiently as possible.

Several of the events had multiple generations working on the same comforter, great-grandparent and great-grandchild working in sync.

Stories of the lasting impacts of MCC’s relief work also materialized. One of the participants at an event in Germany mentioned that as a child she had been wrapped in an MCC comforter after the end of the Second World War.

In Alberta, a group from the Islamic Family & Social Services Association (IFSSA) heard about the event and wanted to help.

“[The] majority of them came from refugee camps and they still remember the bitter taste of life and the harshness of the cold winter there,” said Rola Mustafa, refugee support manager at IFSSA. “The ladies were so overwhelmed with a sense of happiness and fulfillment; this is why all of them stayed till the end of the day. We'd like to thank MCC for always giving us a chance to give back.”

Stories like these underscore the importance of MCC’s work as the organization enters its centennial year.

The comforters created during the event will be distributed along with others collected during the year to bring relief to those affected by disasters and conflict.

“Comforters are an excellent metaphor for the nature of our work around the world,” said Rick Cober Bauman, executive director of MCC Canada. “One square of fabric alone cannot keep the cold away, but many pieces connected together produce warmth against the cold.”

Related stories:
MCC celebrates 100 years of global ministry
Join 'The Great Winter Warm-up'
Watch: The journey of a comforter
Helping others, one stitch at a time
MCC celebrates, serves where its work began 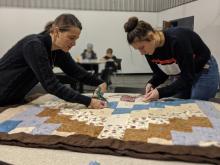