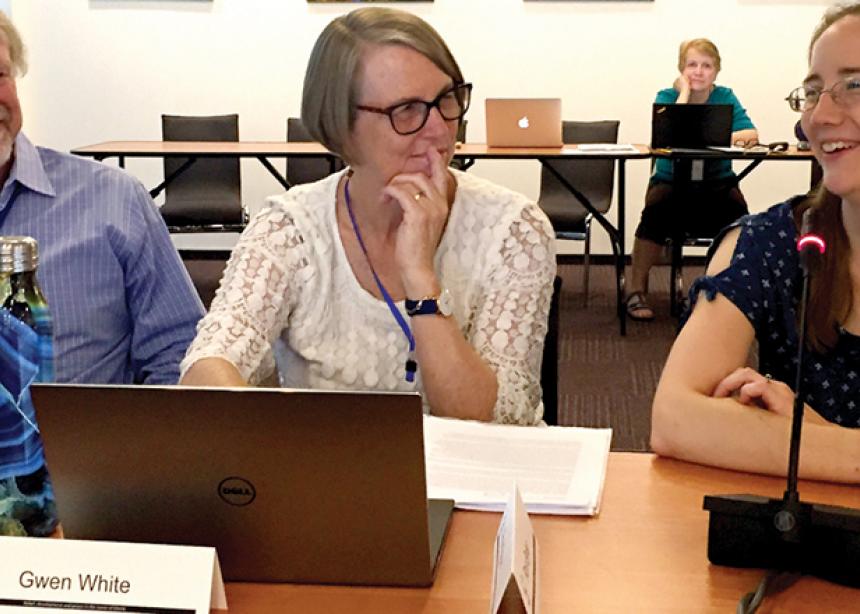 Katie Geddert, right, MCC country co-representative in Ukraine, speaks at the joint meeting of the U.S. and Canadian MCC boards on June 19 . At left are MCC Canada board chair Paul Gilbert and MCC U.S. board chair Gwen White. (Photo by Paul Schrag)

Mennonite Central Committee (MCC) has a loyal constituency, but its leaders don’t take the support for granted.

“We can no longer assume Mennonite churches are familiar with MCC,” said board member Robert Enns of Calgary. “There are a lot of churches where MCC is just another organization out there.”

To stand above the competition—and to safeguard MCC’s special place in the hearts of many Anabaptists—agency leaders decided on June 20 to give more attention to increasing engagement with people “across the full range of Anabaptist churches and beyond.”

This goal is part of a four-point strategic plan for 2020 to 2025 that the U.S. and Canadian MCC boards approved during joint meetings while on a learning tour in Ukraine.

The plan calls for renewing MCC’s identity and mission, and deepening its spiritual grounding as a witness to God’s love, as the agency begins its second century.

Financial support remains strong. Shared program contributions were US$48.9 million in the fiscal year that ended March 31, up from US$48.5 million the previous year.

Yet board members and staff said it was increasingly important to tell MCC’s story in Anabaptist churches and to work at attracting support among young people and members of other faith traditions.

The plan mandates “an increased focus on audience-based communication, fundraising and strengthened recruitment efforts with a new generation.”

The other three points call MCC to:

Paying attention to climate change relates not only to programs in the field but also to building relationships with younger people.

“You have to include climate change, because that is what the younger generation is concerned about,” said board member Gabriela Ochoa of Essex, Vt.

Others said the creation-care priority was important because climate change drives extreme weather that hinders development and is linked to an increase in natural disasters. All of this affects MCC’s international partners and programs.

“There are going to be more water crises,” said board member Jill Schellenberg of Hillsboro, Kan. “We have to have [climate change] in our minds because it is in our future.”

Members of both boards stood and applauded after getting the strategic plan done sooner than expected. They had planned to finalize it at their fall meetings.

Canadian board chair Paul Gilbert said the early completion showed a spirit of unity on both sides of the border.

U.S. board chair Gwen White noted the significance of adopting a strategic plan that will begin in MCC’s centennial year.

“Our work has evolved over the century,” she said, citing the addition of peacebuilding as a priority in the past and now moving creation care from the “the edges of our conversation” to a central place. “We are a part of this generational development of expanding how we do what we do, making it relevant now.”

This article was written for Meetinghouse, an association of Anabaptist publications.

Katie Geddert, right, MCC country co-representative in Ukraine, speaks at the joint meeting of the U.S. and Canadian MCC boards on June 19 . At left are MCC Canada board chair Paul Gilbert and MCC U.S. board chair Gwen White. (Photo by Paul Schrag)

Paul Shrag of the Mennonite World Review (CM July 2019) reports on the Canadian and USA Mennonite Central Committee representatives devising a 5-year plan to re-envision the brand and mission of Mennonite Central Committee. The rebranding would consist of safe-guarding and expanding the existing donor base, increase church capacity to support immigration, redouble peacebuilding/development efforts, and introduce a focus on the effects of climate change across the MCC spectrum.

The reasons for the 5-year strategic plan are varied but familiar, of corporate growth strategies, including building the donor base, keeping ahead of the competition (other NGOs?), and introducing new products (climate change). While the changes are familiar and perhaps expected, the underlying structure of the MCC charity model has not changed through the rebranding vision/process. Hardly the kind of inspiration and change that would perhaps "Ignite the Imagination" of Mennonite Church Canada constituents.

Elaine Heath, guest speaker at the Mennonite Church Canada 2019 Conference in Abbotsford, B.C. identifies that change is inevitable and that some of the old ways of "doing church" need to go. Heath identifies that a new model is called for. She encourages Mennonite constituents to go out into the neighbourhoods and be the Gospel. She cites John 1:14 as a foundation to her understanding of this model, namely "The Word became flesh and blood and moved into the neighbourhood" (The Message). Her message challenges the "charity relief model" of Mennonite Central Committee we have come to be so comfortable with.

In one fell swoop over four short days, Elaine Heath challenges the "old" and introduces the "new." Perhaps she does not see it in a binary either/or way, however she is indicating that we are to "go out into our neighbourhoods and be the Gospel." That seems to indicate that our main time, energy, people, and material resources need to be redirected from an external charity/relief focus, to an internal Spiritual growth focus through our everyday interactions to meet the human needs of our neighbours and consequently ourselves. Sounds like a new model of being the "church" is being promoted by Mennonite Church Canada.

Although MCC obviously does not benefit economically or materially from their relief efforts in Africa, there may be other motivating factors for directing our monies/efforts overseas, and the "white saviour complex" may have direct connotations and interpretations in this regard. The Mennonite Central Committee is unabashedly a Christian organization, supported heavily by its Canadian Christian constituency. Underneath the logo on the MCC website is the tag-line, "Relief, development and peace in the name of Christ." To put it rather crudely, there are souls to be won on the "dark continent" and that seems to be at least part of the motivation of the Canadian Mennonite constituent for directing our dollars to be spent in Africa.

A case in point which seems to support the "white saviour complex" is the MCC presence in Zimbabwe. MCC works in partnership with another Anabaptist church organization in Zimbabwe, namely the Brethern in Christ church. The BIC has had a presence in Zimbabwe since the turn of the 20th century or so, and souls and church growth are a large part of their efforts in that country. Perhaps this is as it should be, given that both organizations are Christian based, however are there strings attached to our giving, and should the hungry be held hostage by a commitment to a belief system? Why exactly are we (Mennonite Central Committee Canada) overseas in such a large capacity, yet are faintly present in Canada itself (5% of our donations)? Surely there are needs that exist here as well.

In the case of Mennonite Central Committee efforts in Africa, perhaps we would be well-served to examine our (Mennonite constituents) motives for preferring that approximately 95% of our (Canadian) donation dollars be spent outside of Canada, and only 5% spent on Canadian programming (MCC budget funding report as of March 31/18 "Schedule A"). It is baffling that we are content that this seeming imbalance in programming exists. Perhaps I am interpreting the financial information incorrectly, and stand to be corrected, however it readily apparent to anyone willing to honestly observe, that there are food, water, health, and justice/peacebuilding needs right here in Canada, in our own neighbourhoods, the very neighbourhoods which Elaine Heath urges us to pay attention to. Perhaps the reasoning for overseas investment cannot be credited to any one motivation. Perhaps it is perceived that the needs are not as great in Canada, or that International needs are more deserving of our help, or that there is a better church building return on investment overseas, or that Canadian gov't aid should be sufficient, or any other of a myriad of reasons, whatever the case, the charity/relief model is a good fit for a church in stasis, however seems not to be a good fit for a church in change. The new 5 year strategic plan envisioned for Mennonite Central Committee operations seems to be more of the same all over again. The trappings change, the model remains the same.

Beyond the urgings and remonstrations of Elaine Heath, perhaps we would do well to consider the thinking/research of Anabaptist historian C. Arnold Snyder, University of Waterloo, Ontario. Snyder writes an essay entitled "Anabaptist Spirituality and Economics" published in "Anabaptist/Mennonite Faith and Economics" (Redekop, Krahn, Steiner, 1994). In his essay, Snyder notes that Anabaptist economics were in part a result of rebellion against an unjust system of tithing in the pre-Reformation Roman Catholic church. Monies/taxes were being sent/spent outside of the parishes from which they originated. Aside from the tithing aspect of Anabaptist economics, Snyder points out that Anabaptist economics were generated first and foremost out of a Spiritual understanding of the Biblical mandate. Snyder posits that "all Anabaptists agreed that the re-born, baptized, and regenerated believers made up a sharing community by virtue of their re-birth, baptism, participation in the Supper, and a manner of life obedient to Christ's commands. The Anabaptists could not conceive that there would be reborn and regenerated Christians, baptized into the one Body of Christ, who would cling to surplus goods or wealth when they saw a fellow member of the Body in need." It was given and understood, it was a matter of course that Christians would live in a sharing community, would not hoard surplus goods/wealth, or try to amass as much wealth for themselves as possible, and construe it as God's blessing.

Snyder questions whether Anabaptist spirituality and subsequent economic actions could have any relevance for us today, or as he queries, do we as post-modern Christians have a superior interpretation and understanding of Biblical spirituality, and the early Anabaptist interpretations with their economic outcomes were misguided and are hardly applicable to our present situation. An extension of Snyder's question then is of course not so much a focus on Anabaptist interpretations of what it meant to be a Spiritually filled person during the time of the Reformation, but rather, what does interpreting/living Biblical wisdom look like today?