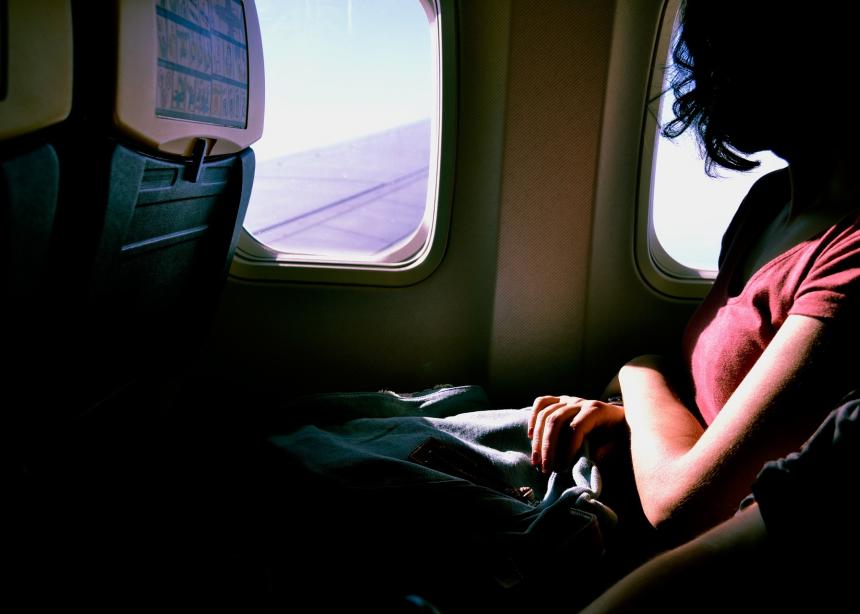 Two hours into a conversation that I deeply regretted starting, the man seated next to me said, “Most people on this airplane are probably not Christian. If this flight starts to crash, I will stand up, tell everyone to repent [of their sins], accept Jesus as Lord and be saved. Otherwise, they will spend eternity in hell. Will you help me?”

We were flying from Calgary to Toronto in March. I was returning from the Mennonite Church Alberta annual delegate session; he, from a conference with his own church. He wasn’t actually asking for my help. He was testing my commitment as a Christian.

What a question. An Ethiopian Airlines flight had crashed only days earlier. If our flight crashed into Lake Superior—whose icy surface I could see from my window—we would die too. In everyday life, people may not see a need to claim Jesus as Lord and be saved, but facing imminent death, people might take interest. My seatmate saw an airplane crash as a chance to save some souls.

He was probably correct to assume few people on the plane were Christian. In this issue of Canadian Mennonite, Ryan Dueck’s column, "A conversation with a Buddhist," comments on the decline of religious affiliation in Canada.

At the MC B.C. annual gathering in Vancouver this winter, keynote speaker Jared Siebert noted that, in Canada today, many people know very little about Christianity and they have a poor impression of Christians. If someone asks why you are Christian, Siebert said, don’t give them a list of beliefs held by your denomination, like Mennonites practise adult baptism and are pacifists. Instead, he said, explain why you are a believer. What is it about your faith that is worth sharing?

My seatmate believed that the reason to tell people to repent and be saved was so they could avoid God’s punishment. He needed to do this or he would be punished too. It was a complete contrast to my faith, which begins with the premise that “God is love.”

Our conversation started because he was reading the Book of Joshua. It was so unusual to see someone on an airplane reading a Bible—let alone the Book of Joshua—that I asked if he might be a preacher preparing a sermon. It turned out that he had a Bible reading app on his phone and this was part of the day’s readings. I said that Joshua is a book Mennonites struggle with because of the violence carried out in God’s name and this is what led to a lengthy conversation about obedience and “God’s justice.”

We had two completely contrasting views of Christian discipleship. He was fearful of punishment at death. I spoke of positive reasons for being faithful now. He flipped back and forth through his Bible, citing verses that showed God punished the disobedient. I pointed out that Jesus frequently criticized the Pharisees and Sadducees for being too legalistic, and that Mennonites took inspiration from Jesus’ daily life, in which he offered grace, healing and hope to the needy and marginalized in society.

All this had led to my neighbour’s question. “If this airplane is going down, we need to save the people who have not accepted Jesus, or they will be condemned. We will be condemned too if we don’t try. Will you help?” he asked again.

Can one stand up while an airplane is crashing? Would anybody even hear? I didn’t think I should mention the physical challenges of his plan. He would have reminded me that “nothing will be impossible with God” (Luke 1:37). In any case, fear is not rational, so there was no point arguing further.

I told him I would.

Canadian Mennonite is looking for writers to expand our roster of columnists. If you participate in a Mennonite Church Canada congregation, have writing experience and are interested in sharing personal experiences and insights with our readers, we welcome a proposal. Columnists should have a particular focus for their column (for example: peace and justice, or an evangelical theological perspective). Columnists write 600 words 12 times a year and receive a small honorarium. Send your proposal, including a column focus and name, and one sample of a 600-word reflection to editor@canadianmennonite.org.

Read more editorials:
Holding out the Christ-light
Costly perfume
First impressions
No more of this!
Are we there yet?