No more of this! 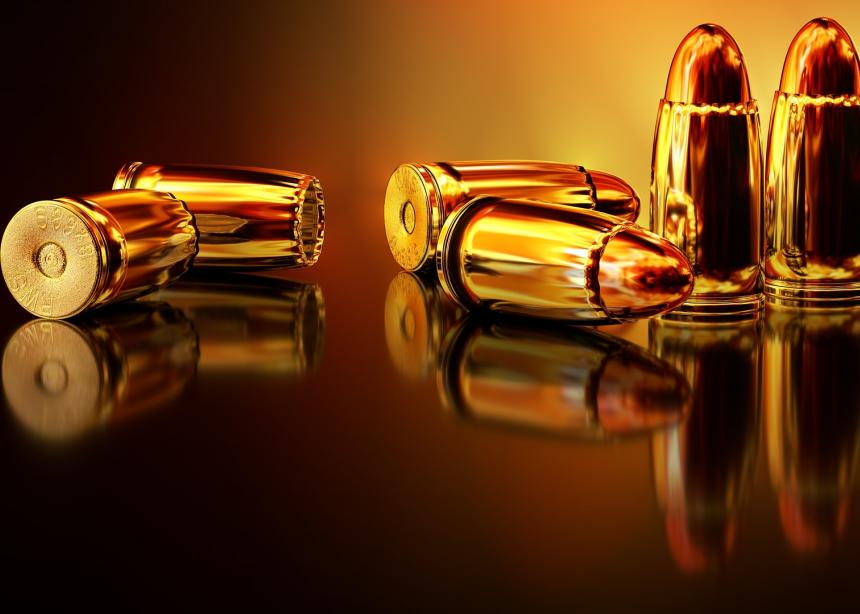 'As someone who embraces this countercultural message of Jesus, I still hear his voice today challenging the idolatry of gun culture.' (Image by 470906/Pixabay)

One morning in the second full week of Lent, I woke up to the first sign of Easter.

It had been a dreary season of violence. In the beginning of March, a shooter injured six people at a Chicago club. On March 15, in New Zealand, a gunman killed 50 worshippers in planned attacks at two mosques. Three days later, a man in the Netherlands shot at people in a tram, killing three and wounding seven.

The Sunday after that shooting, Pastor Renee Sauder referenced Luke 22:47-53 in her sermon. In the Garden of Gethsemane, Jesus is struggling with his impending fate. An armed band of people shows up to arrest him. In a panic, one of his disciples grabs a sword and slashes off the ear of one of the arresters. Jesus’ immediate rebuke: “No more of this!”

Our normally soft-spoken preacher raised her voice, in a tone of authority that amplified Jesus’ command: “No more of this!” No more of this violence, no more steel weapons hurting people. It was a prophetic call to hearts still trying to comprehend yet another brutal act using the “swords” of our day.

Rest of the story: Jesus re-attaches and heals the severed ear. He chooses to absorb the subsequent violence into his own body, suffering ridicule, beatings, pain and, a few days later, death on the cross.

Throughout his ministry, Jesus recalled a prophetic vision, spoken in olden times by both Micah and Isaiah: enemies restored to a common life of peace, swords no longer serving the purpose of destruction but, instead, becoming tools for life-sustaining agriculture. “[The Lord] shall judge between the nations, and shall arbitrate for many peoples; they shall beat their swords into ploughshares, and their spears into pruning hooks; nation shall not lift up sword against nation, neither shall they learn war any more” (Isaiah 2:4).

That glorious vision continues to inspire today. In our March 8 issue, we profiled Irian Fast-Sittler, a young blacksmith who shaped her grandfather’s shotgun into a work of art. She is part of an inspiring movement of Christians attempting to live out, in practical terms, the prophetic vision of weapons transformed. Take, for example, RAWTools, Inc., an organization that has been literally re-fashioning guns into hand tools since 2013.

As someone who embraces this countercultural message of Jesus, I still hear his voice today challenging the idolatry of gun culture: “no” to “efficient” firearms that destroy human targets in a single bullet spray. “No” to technology that dehumanizes the act of killing. “No” to fortunes made from weapons sales. “They shall learn war no more.”

As I went to bed that Wednesday, police in New Zealand were identifying the bodies of victims, and their families were preparing to bury loved ones. Shock and grief filled multiple newsfeeds and news sites. Even thousands of kilometres away, that sorrow had seeped into many peace-loving hearts.

But while our weary hearts still slept, the government of New Zealand instituted a ban on “military-style” semi-automatic weapons. It was an extremely fast response, contrasted with the never-ending contentious gun-control debates that engage North American lawmakers. Sales of this type of weapon would be stopped immediately. Gun owners would have a time of amnesty in which to return their weapons in a formal buyback scheme. Amazingly, the overall concept of the ban was widely supported in its home country.

Easter peeks through into Lent when a nation says, “No more of this!” While humankind has a long way to go before we experience Isaiah’s peaceful vision, this 21st century gun ban becomes a small sign of hope during dark days of mourning. May people of goodwill around the world heed Jesus’ call to life. May the resurrected Christ give us all courage and strength to stand against the powerful forces of destruction. May we, with God’s help, live into a new Easter reality.

Recently we learned of the death of Tim Wiebe, on March 14 in Altona, Man. Mennonites in various Mennonite communities know him through his contributions to Mennonite education, radio broadcasts, music and more. Some of CM’s readers will remember his column on our pages. “Pilgrim pieces” ran from January 2000 to August 2004. Tim shared personal anecdotes and stories about friends and family members, reflections, and sometimes even jokes. His tone was friendly and informal, blending humour and insight, sometimes with a touch of self-mockery. Thank you, Tim.

Read more editorials by Virginia A. Hostetler:
Are we there yet?
Moving beyond ‘climate grief’
The adventure of leadership
In conversation
New things ahead

'As someone who embraces this countercultural message of Jesus, I still hear his voice today challenging the idolatry of gun culture.' (Image by 470906/Pixabay)