Mennonite milestones through an artist’s lens 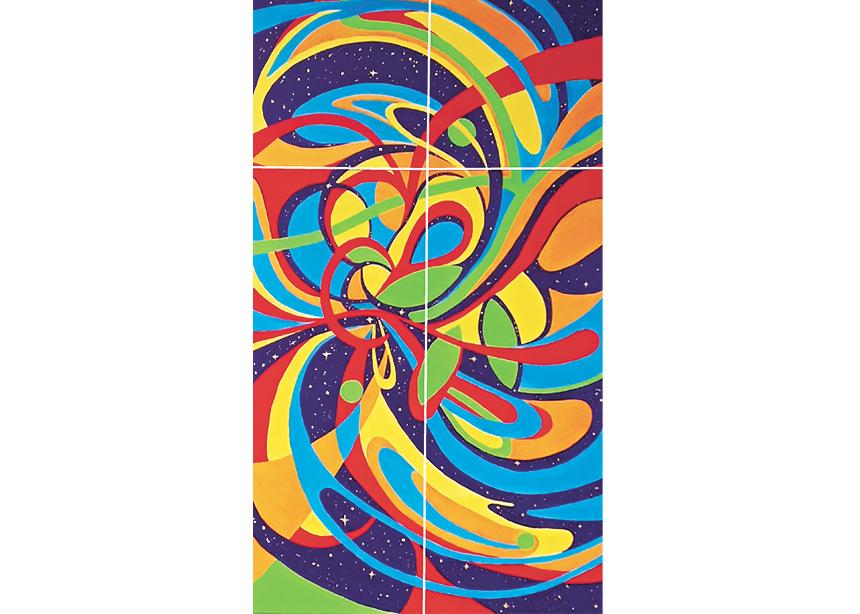 Lynda Toews painted “Psalm 19” to commemorate the launch of Voices Together. (Photo courtesy of Lynda Toews)

The year 2020 featured some big moments in the Mennonite world. MennoMedia launched Voices Together, the new worship and song collection; and Mennonite Central Committee (MCC) celebrated its centennial. Although COVID-19 prevented people from gathering in person to mark these milestones, one artist still found a way to commemorate them.

Lynda Toews, the artist-in-residence at Bethel Mennonite Church in Winnipeg for the 2020-21 season, designed a quilt in honour of MCC’s anniversary, sewn by Bethel member Cheryl Warkentin, which they hung in the sanctuary. Toews also created a painting inspired by the new hymnal.

Toews, who attends Bethel, holds degrees in fine arts and education. Her series of paintings depicting farm animals, “A place in the kingdom,” was featured at the Mennonite Heritage Centre Gallery in 2015. But the abstract style of the Voices Together painting, entitled “Psalm 19,” was an adventure into new territory for the experienced artist.

She knew she wanted to express music through an abstract interpretation, like many artists have done before. Musical notes and instruments were too literal for her. Her first question was, “How do I paint something that could be thought of as worshipping God? It is a worship hymnal. My mind went to the heavens and Psalm 19.”

In her youth, Toews slept under the stars at a Bible camp, witnessing glittering meteor showers and the mesmerizing aurora borealis lighting the sky in purples and greens. Her mother passed away on New Years Eve, and the fireworks seemed like the heavens were welcoming her. “So the heavens have always held a special place for me,” says Toews.

With a swirling galaxy to embody the movement of music, next she had to make it specific to the Christian and Mennonite contexts. She put together four canvases to form a subtle yet central cross and incorporated the dove and olive branch logo of the Mennonite church. The purple and gold of Voices Together and the rainbow of Bethel’s stained glass windows colour the canvas.

All of this would have been seen by hundreds from across Canada at a large gathering to launch Voices Together, which Bethel had been slated to host in November. Instead, Toews assembled a book explaining the process behind all the art she has created during her residency, which she is hoping to publish for the church library. While the painting hung proudly on the wall of the sanctuary, she told its story during their Sunday video service dedicated to the hymnal.

She told of the most remarkable surprise that came to her at the end of the process. She had painted the canvas sideways and when she stood it upright, her husband saw two unexpected figures that she had unknowingly painted: an eagle and a fish. “It wasn’t intentional, and that’s the part that’s fascinating about this painting,” says Toews.

She saw the fish as a symbol of Christianity and thought the eagle might represent the relationship between Mennonite settlers and Indigenous peoples. She says it is open to interpretation, though. “Just like seeing faces or creatures in the clouds,” other people have seen butterflies, a tuning fork and other shapes.

“In the end,” she says, “I just wanted the energy and movement to be like a spinning galaxy, expanding and swirling, stabilized by the cross and energized by the cross, to create this expression of joy and light and celebration, and the rest was an unexpected bonus!”

The work resonated with Bethel member Waldy Ens, who was inspired to write the poem “Lynda paints hymnal”:

“Voices sing bright colours into being / together bring olive branch into swirling focus / red purple yellow green and blue in centrifugal sky / centred by inner cross / all in starry harmony / extended to infinite master of the universe / worthy of praise / bearer of burdens / hearer of prayer / centre of meditation / giver of love and law / so let us sing beneath the eagle’s wing / fishers we.”

Ens says he was struck by the way “the painting does not end at the edges of the canvas, but extends to the infinite, in the same way that our voices do in song, prayer or praise . . . the dynamic, swirling use of colours and starry sky creates a deep impression of the music of the spheres.”

It’s clear to Toews that visual arts make an important contribution to worship. “The church is so word-based and that’s just one way of knowing things,” she says. “[Art is] definitely useful because it accesses other parts of our brain, and other ways of thinking and feeling and worshipping. I think it’s invaluable.” She hopes drama, dance and more art forms will become more common in worship too.

Bethel began its artist-in-residence program in 2016 to recognize and nurture congregants’ gifts and open up new ways of worship.

Toews’s final project is a six-week series of paintings and essays about trees. She will be presenting it to Bethel in January.

Related stories:
Peacebuilding monster
‘Just doing my best’
‘I do believe in prayer because I believe in poetry’ 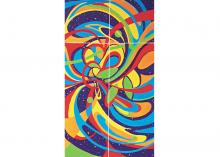 Lynda Toews painted “Psalm 19” to commemorate the launch of Voices Together. (Photo courtesy of Lynda Toews) 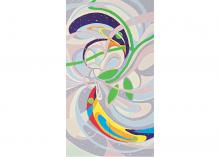 Unintentional figures, like a fish and an eagle, appear in Lynda Toews’s painting. (Photo courtesy of Lynda Toews) 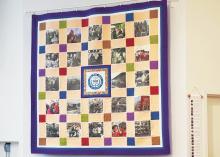 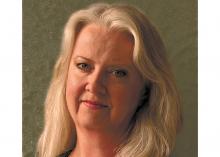