Young poet talks about the connections between faith and writing 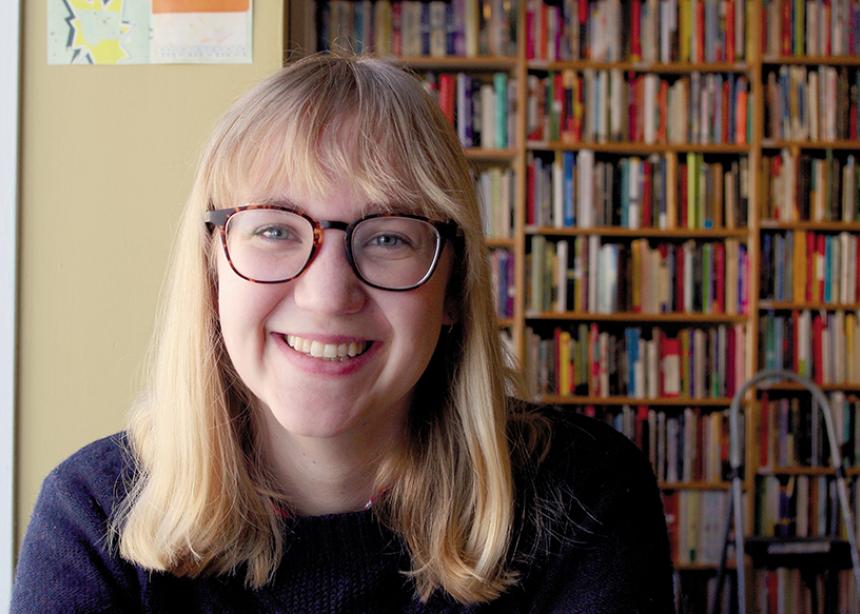 Sarah Ens’s writing career started at the age of six with a story suspiciously similar to the children’s book, Julie and the Wolves. But since those early days, she has grown into an award-winning poet.

Earlier this month, she won an honourable mention and $150 in a competition for the Young Buck Poetry Prize, a competition run by Contemporary Verse 2 (CV2), a respected Canadian literary journal of poetry based in Winnipeg. She was one of the journal’s four finalists, chosen from an initial list of 12 poems selected from many dozens of submissions by writers under the age of 35.

Ens, 25, grew up in Landmark, Man., and began writing poetry when she was in high school at Landmark Collegiate. She wrote in her journal, mostly poems, every day of her six years in high school. “I could never separate my life from writing as a part of it,” she says.

By Grade 11, she knew she wanted to study creative writing. She did an independent study of poetry with her English teacher, and after high school pursued her dreams by completing a four-year bachelor of fine arts degree in creative writing at the University of British Columbia (UBC) in 2014. She currently works as an editorial assistant at Turnstone Press in Winnipeg.

Although she writes fiction and non-fiction works, Ens focusses mostly on poetry. She says poetry can come from a very personal place but also from a totally fictional realm. “You don’t know what you’re going to expect when you’re reading a poem,” she says. “I think that is what I find really exciting.”

In September 2016, Ens began an enjoyable side-project of regularly posting haikus on Instagram along with pictures of Balto, her kitten. Selections from this project were displayed at the 2017 MennoFolk event, a celebration of music and art by those connected with the Mennonite community. “Poetry can evoke such a specific feeling with such a sparse number of words,” she says, “but everyone might access a different particular emotion.”

Writing and faith have always been intertwined for her. She grew up attending Bethel Mennonite Church in Winnipeg with her family and participating in youth with her friends at Prairie Rose Evangelical Mennonite Church in Landmark. She says she has always had moments of questioning what she believes. This was especially clear to her when she attended UBC, where going to church wasn’t necessarily a common practice and most people didn’t know what a Mennonite was.

It is writing, especially poetry, that has gotten her through these difficult questions and ups and downs of faith. “I do believe in prayer because I believe in poetry,” she says. “Even if my poems are not directly about God or my faith, they feel like a prayer. It doesn’t really matter how confused or questioning I am in my faith . . . writing is such a way of grounding myself.”

Ens says this makes sense when one looks at her Mennonite context. “I’ve heard a lot of people like Di Brandt and Miriam Toews talk about . . . how Mennonites [have] a natural urge to write and story tell,” she says. “I feel like my identity as a Mennonite and my need to constantly process things through writing just would constantly be together.”

She says she feels lucky to be able to draw on such rich stories like Mennonite history and the Bible. She didn’t realize how much of a gift it was until she was surrounded by people who didn’t share the same background with her.

She says it was a great way to bring her writing in direct conversation with her church experience: “Never before [has]. . . my storytelling writing so tangibly connected with my faith.” She will continue to explore this dynamic as she plans to study poetry and creative writing at the graduate level.

The winning poem Ens wrote for CV2 is called “A boat is not the whole world.” It is based on her memory of spending time with her cousin in a canoe on Lake of the Woods during a time of heartbreak for both of them. The poem will be published in the summer 2018 issue of CV2. 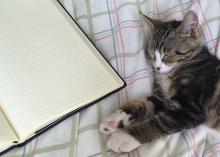 Sarah Ens’s cat, Balto, is the inspiration behind her poetry that appears on Instagram @balto_thesleddog. (Photo courtesy of Sarah Ens)