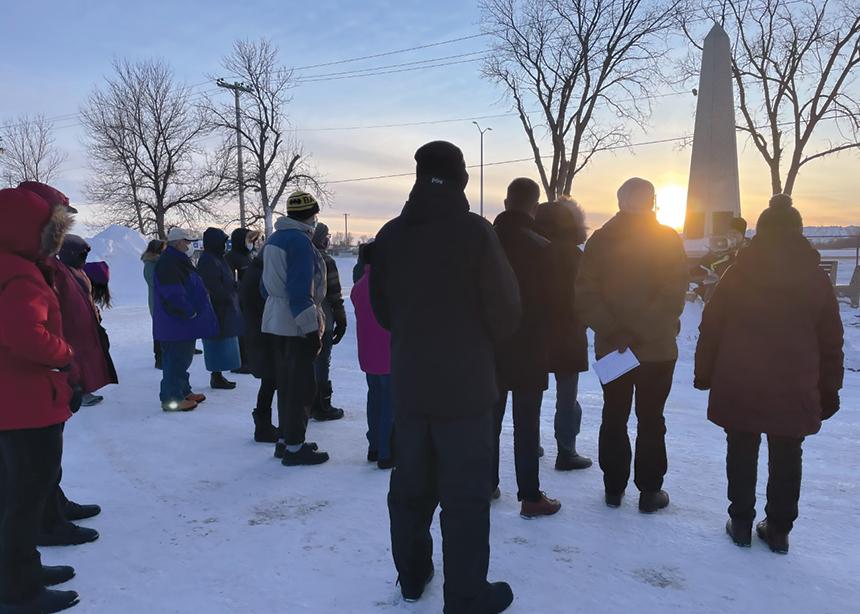 On the cold evening of March 13, about 60 people gathered outside at Mennonite Heritage Village (MHV) in Steinbach, Man. to pray for peace in Ukraine. The museum, which commemorates the Mennonite people and their 500-year journey of migration, hosted the vigil to provide Manitobans an opportunity to grieve, pray and stand in solidarity with the people of Ukraine.

The group encircled a monument that memorializes Mennonites and others who were displaced or killed in the violence following the Russian Revolution in present-day Ukraine. Almost 100 years later, the homeland of many Mennonites’ ancestors is again facing violence and war. The cenotaph stands near the museum’s entrance as a representation of those in the Mennonite community who know such loss personally and as a reminder to stand with those suffering in Ukraine today.

Gary Dyck, executive director of MHV, heard of many fundraisers being organized in support of Ukraine, but nothing encompassing prayer. “During times of grief and tragedy we need to come together as a community, support one another and pray for an end to the violence we see,” Dyck said.

Alvin Suderman, chair of Friends of the Mennonite Centre in Ukraine, gave an update on the centre in Molochansk. It has ramped up its operations, aided by increased donations, to help a growing number of refugees in its vicinity get food and supplies.

Participants broke into small groups to pray for those affected by the conflict.

“For me it was really moving that the Mennonite Heritage Village would choose to honour the heritage of many other Mennonites and Ukrainian people here in Canada that still have historical connection to the homeland,” says Elsie Kathler, a member of Grace Mennonite Church in Steinbach and an MHV volunteer. “It gave us the opportunity to pray together; that was really special.”

The 74-year-old is a third-generation Canadian whose great-grandparents emigrated from Ukraine. She’s still in contact with extended family there, as well as with a former Ukrainian student that her church sponsored to study in Canada. He has been like a brother to her and has been sending weekly updates from the frontlines of the conflict. When she told him of the prayer vigil, he said that “it really warmed his heart and brightened his spirit, to hear that people in Canada were doing that.”

Kathler taught the gathering how to say “God bless Ukraine” in Ukrainian, which is her first language. They joined together in prayer, candles in hand or flickering around the monument, repeating the refrain after each prayer.

This article appears in the April 4, 2022 print issue, with the headline “Mennonite Heritage Village hosts community prayer vigil.” Do you have a story idea about Mennonites in Manitoba? Send it to Nicolien Klassen-Wiebe at mb@canadianmennonite.org. 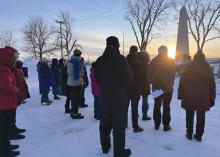