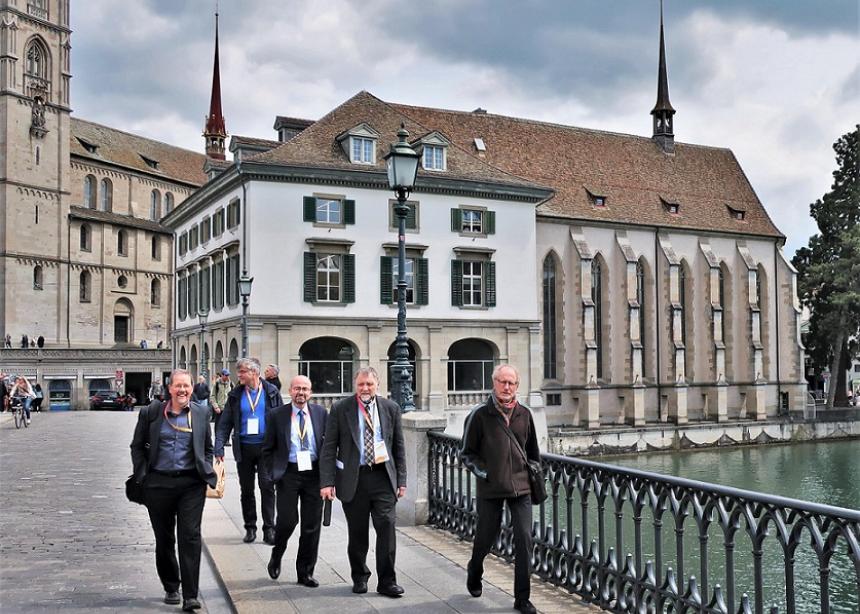 “Reformed and Anabaptist are branches from the same tree,” said Hanspeter Jecker, a Mennonite theologian from Switzerland. “Anabaptist convictions that once were controversial—such as the voluntary nature of church membership and rejection of capital punishment—are now accepted by many Christian groups. Centuries of opposition have turned to reconciliation.”

Five centuries after Swiss reformer Ulrich Zwingli suggested Anabaptists be “cast to the ravens,” Anabaptists from Mennonite World Conference (MWC) are joining spiritual descendants of Zwingli from the World Communion of Reformed Churches (WCRC) for a series of formal conversations culminating in 2025. They will review what divided the two groups in the 16th century and identify ways the churches can reconcile and collaborate today.

The Reformed movement includes Presbyterian, Congregational and other denominations that trace their lineage to 16th-century Zurich. WCRC leaders meeting in Switzerland hosted an MWC delegation during their annual gathering in May. Jecker and MWC Faith and Life Commission members John D. Roth of the United States, and Thomas Yoder Neufeld of Canada joined general secretary César García and president J. Nelson Kraybill in their meeting with WCRC representatives.

“With this dialogue, a 500-year-old Bible study, in which both of our communions once found their beginnings, is being reconvened,” said Yoder Neufeld. (A Bible study conducted by Zwingli inspired Felix Manz, Conrad Grebel, George Blaurock and others to part ways with Zwingli and found the Anabaptist movement.)

Participants from WCRC and MWC are beginning several years of periodic conversations under the rubric of “Seeking a common witness: Restoring our family to wholeness.”

Tension between Zwingli and his radical disciples brought persecution and martyrdom to Anabaptists. Reflecting on this painful history, Roth confessed that Mennonites became comfortable with thinking of themselves as victims. But that does not fit well with the subsequent and current reality, he said.

Mennonites and Reformed people have had meaningful interaction for years, but they have not formally reviewed the shared history or named common ground for the future globally. “Mennonites must not remain anchored in the past,” Roth said. “We are truly sisters and brothers with Reformed people.”

Chris Ferguson, the WCRC’s general secretary, said his people have a “tragic and broken past” with Mennonites. “It is time for right remembering and reconciliation. Both groups started in a united movement that broke into disagreement.”

The Reformed communion “is badly in need of the peace message of the Mennonite church,” he said.

In Zurich, Reformed and Mennonite participants walked together to sites related to the shared beginnings of the two churches. At the place on the Limmat River where Felix Manz and other Anabaptists were drowned, Swiss Reformed Pastor Peter Detwiller recounted that a 1952 attempt to put up a memorial plaque at the site for the Anabaptists was denied permission, but in 2004 city officials granted permission. Anabaptist groups from around the world now visit the martyrdom site.

In a closing statement, WCRC participants said, “We recognize how theology and spirituality can be abused to foster hostility and violence. We commit to the dismantling of such theologies and spiritualities and to the advancement of theologies that seek the dignity and respect of all life. It is from this stance that we take up a dialogue with Mennonite World Conference.”

Building unity in the body of Christ 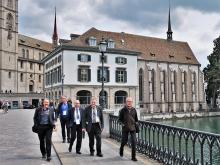