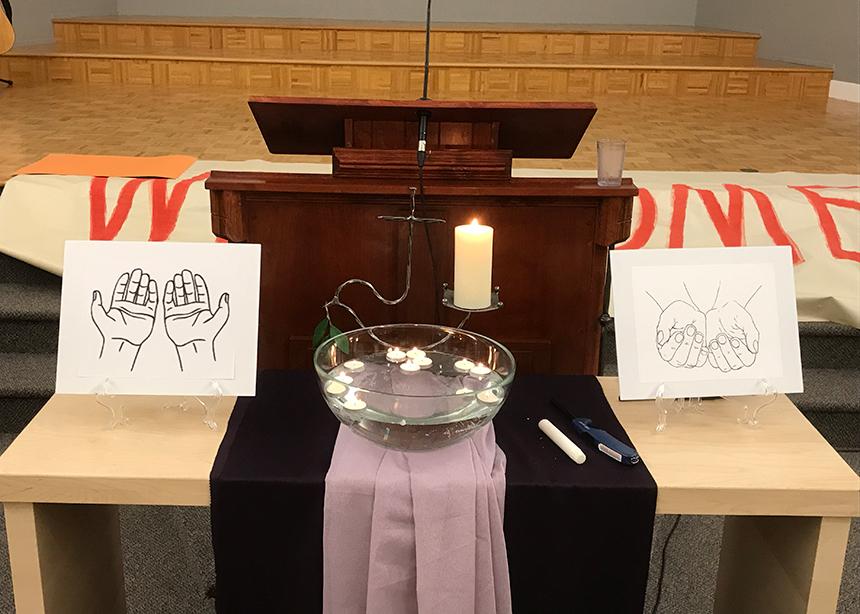 During a litany of release and embrace, MC Alberta delegates lit candles to remember and release individuals who have passed away, churches that have left MC Alberta, and programs no longer present in the regional church. Candles also celebrated and embraced new and hopeful baptisms, churches who have joined MC Alberta and vibrant programs. (Photo by Tim Wiebe-Neufeld)

It was an unusual delegate session, with the bulk of the time dedicated to discussion rather than business. “Discerning God’s call,” Phase 3 of Mennonite Church Alberta’s Vision 20/20 process, engaged participants in reflection on what was heard in congregations during the previous phase, “Season of prayer.”

On March 15, a service of remembrance and celebration included more than a naming of deaths and baptisms from the past year. Executive minister Tim Wiebe-Neufeld and Heather Klassen led a service of “release and embrace,” naming losses and gains, to acknowledge the entirety of MC Alberta’s experiences of recent change. With lament and gratitude, congregations that have closed or left the regional church, and historic gatherings such as Songfest, a youth sports weekend and curling bonspiels were remembered and released into God’s care. Names that limit the church, such as “small” and “old,” and unnamed griefs were also released. With joy and hope, the group named congregations that have joined MC Alberta in recent years, new programs such as the women’s retreat, the Camp Valaqua garden party, and the interfaith work of the North Edmonton Ministry.

Reports from leadership and committees were briefly presented on the morning of March 16, with no resultant issues requiring discussion.

Camp Valaqua reported a good year, with a 9 percent increase in camper numbers and a clear vision of outreach. The number of campers reporting no church background has grown to the point that, in 2018, it was 75 percent of campers. Director Jon Olfert wrote in his report: “Our summer camp program introduced the kids to the stories of Jesus and the power he can have in their lives.” He went on to comment that camp staff make no assumptions that children have Bible knowledge. “We tell the story from the beginning,” he said.

The North Edmonton Ministry, with outreach worker Donna Entz, is pleased with the success of ongoing Muslim-Christian dialogue events. In addition to the annual Edmonton dialogue, Calgary hosted a well-received first event. The bridge-building between faiths has even spread outside of the province. A Catholic Father in Pakistan saw the Edmonton initiative online and was inspired to invite imams to his church for dialogue on the same day as the Edmonton event.

Treasurer Wayne Janz noted that budgeting for 2018 had been marked with uncertainty, as it was the first year of a reorganized nationwide church, and MC Alberta had approved an $8,000 deficit. Heading into the end of the fiscal year, it appeared there would be a significant shortfall. A late fall appeal, however, resulted in generosity and a modest surplus of $6,352.

One of the causes for concern was that Camp Valaqua’s budget had been overspent by approximately $15,300. A variety of unforeseen equipment breakdowns, increased grocery prices and staffing costs caused the problem.

In discussion of what God is calling the regional church to release and embrace, several comments rose to the surface and resonated. There was appreciation for the good communication work happening between regional churches and affirmation for the outreach of Camp Valaqua. There was challenge for people to speak openly about faith, perhaps looking toward the newest churches to help teach the established ones.

Comments about re-grounding in core principles and a desire for rootedness were balanced with encouragement to do these things in new ways. “[We can] separate more clearly what is needed and what is culture. The way that has always been done is not essential,” Tany Warkentin said.

Donna Entz remarked that one thing the church could release is “the power of the ‘clans’ in our Mennonite churches. Those who aren’t part of [founding families] can feel left out.”

Pastor Anna-Lisa Salo of Bergthal Mennonite Church pulled on the strength of families to embrace others, suggesting, “Perhaps a spirit of adoption into your family system, instead of trying to break up established [family] systems.”

Tracy Brown-Ewert spoke to the adoption image: “As an adoptive parent, I remind us all that adoption is forever and it is not easy and isn’t all convenient.”

Living into a new structure and hope for the church is not easy or convenient, but, like a loving adoptive family, MC Alberta is committed to the work of Vision 20/20, which is “prayerful listening for God’s voice as we discern what it means to be the church in the 21st century,” said Tim Wiebe-Neufeld and June Miller’s report.

Further reading:
Delegates discuss changes to MC Saskatchewan bylaws
MC Manitoba works through change at annual delegate gathering
B.C. delegates engage together in 'God's mission'
Prepare for something new and yet familiar
Come and let your imagination be ignited 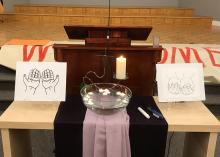 During a litany of release and embrace, MC Alberta delegates lit candles to remember and release individuals who have passed away, churches that have left MC Alberta, and programs no longer present in the regional church. Candles also celebrated and embraced new and hopeful baptisms, churches who have joined MC Alberta and vibrant programs. (Photo by Tim Wiebe-Neufeld) 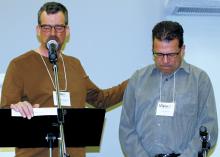 Tim Wiebe-Neufeld, MC Alberta’s executive Minister, left, prays for Doug Klassen as Klassen prepares to leave pastoral ministry at Calgary’s Foothills Mennonite Church to become executive minister for MC Canada. The prayer was part of the blessing and commissioning of staff and volunteers at the MC Alberta annual delegate sessions at Bergthal Mennonite Church, Didsbury, on March 15 and 16. (Photo by Donita Wiebe-Neufeld)