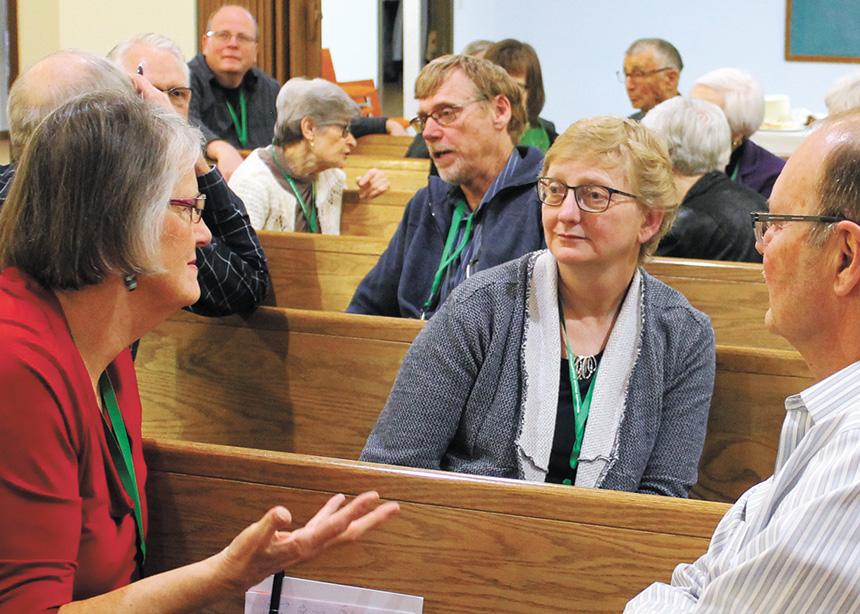 “We looked at the bylaws and asked, ‘Is this what we’re actually doing?’” said Tim Wiens. “Usually the answer was ‘No.’ ”

Wiens was reporting to Mennonite Church Saskatchewan’s annual delegate sessions, held March 8 and 9 at Waldheim’s Zoar Mennonite Church. He and Kirsten Hamm-Epp, regional church minister, were appointed to form an ad hoc bylaws committee with a mandate to update MC Saskatchewan’s bylaws following the restructuring of MC Canada in 2017.

One of the changes Wiens and Hamm-Epp are proposing is that congregations be allowed to elect non-members as delegates to the annual sessions. By implication, this would also allow non-members to serve on MC Saskatchewan’s various committees and commissions.

“People don’t necessarily want to become members [of a congregation] even though they are actively involved,” said Wiens. “If a congregation wants to send someone who is not a member, we should respect their request.”

With regard to the work of MC Saskatchewan, the proposed bylaws will change to reflect only those organizations that are active. The Youth Farm Complex and each of the regional church’s three camps operate independently of the regional church, although each has MC Saskatchewan-appointed board members. Previously, board chairs of these organizations had to be members of MC Saskatchewan congregations. Wiens and Hamm-Epp are proposing that this be changed to allow non-members to serve in these roles.

However, said Wiens, the proposed bylaws stipulate that each of these boards “now have to demonstrate that they can financially keep their obligations.”

Wiens and Hamm-Epp said they feel these changes will help to foster relationships between MC Saskatchewan and their partner organizations.

“We’re giving congregations a year to consider the rewrites before voting,” said Wiens. “That’s different than what some of the other regional churches are doing.”

The proposed changes represent a first draft. A final draft will be ready sometime this fall, so the MC Saskatchewan council can approve it prior to the delegate vote at the 2020 assembly.

The reason for this rather lengthy process is that the proposed bylaws will be presented as a special resolution. Special resolutions require a two-thirds majority vote and cannot be amended at the assembly.

“You don’t do this every year,” said moderator Terry Stefaniuk, “but you want to do it the best you can when you do it.”

From the floor, Peter Peters of Peace Mennonite in Regina said, “I appreciate the door that has been opened to invite people to choose to be participants without becoming members.”

Ike Epp of Fields of Hope Mennonite in Glenbush expressed concern about a proposed change that would make it unnecessary for the delegate body to ratify the annual council report. “Who are the owners [of MC Saskatchewan]?” he asked. “If they are those represented here, then they have to take ownership. [MC Saskatchewan council] are doing what they’re doing on our behalf,” he continued. “That needs to be ratified at this body.”

“Only this delegate body can authorize council to do anything,” Wiens agreed, but he suggested, “Words like ‘affirm’ or ‘uphold’ will actually do same job.”

MC Saskatchewan’s bylaws were not the only thing on the agenda. Finance committee chair Gordon Peters reported that the regional church enjoyed a surplus of $33,131 in 2018. “This may be due to some congregations sending MC Canada contributions directly to MC Saskatchewan,” he said, “but it’s also partly due to generous donations.”

The only item of controversy in the proposed 2019 budget was the omission of funding for Anabaptist Mennonite Biblical Seminary (AMBS) in Elkhart, Ind. Funding for AMBS had only been included in the last few years, said Peters, and it was done because somebody lobbied for it.

Rose Graber of Grace Mennonite in Regina expressed her disappointment with this decision. “I would like to propose that we not limit ourselves to Canadian institutions,” she said. “AMBS has been a resource for us for many years. I would like to keep that school on our radar.”

Christy Martens Funk of Osler Mennonite echoed Graber’s thoughts, noting that the $10,000 that would have been given to AMBS does not represent a large portion of the budget. “I think AMBS is a school that we value and I would like to see it in the budget in the future.”

In the end, delegates approved the budget of just under $645,000 as presented.

Further reading:
MC Alberta embraces new life, hope and possibilities
MC Manitoba works through change at annual delegate gathering
B.C. delegates engage together in 'God's mission'
Prepare for something new and yet familiar
Come and let your imagination be ignited 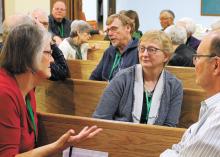 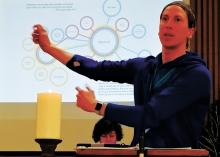 At the 2019 annual delegate session of Mennonite Church Saskatchewan, Joel Ens explains a graphic he designed for his congregation, Eigenheim Mennonite Church, in Rosthern. As congregants explored questions around their church’s outreach, they had challenged themselves to list the various connections they have in their community and beyond, which are represented by interconnected circles. This illustrated a point made by guest speaker David Fitch, who encouraged listeners to seize opportunities for building relationships in the community in which they live and work. (Photo by Virginia A. Hostetler)