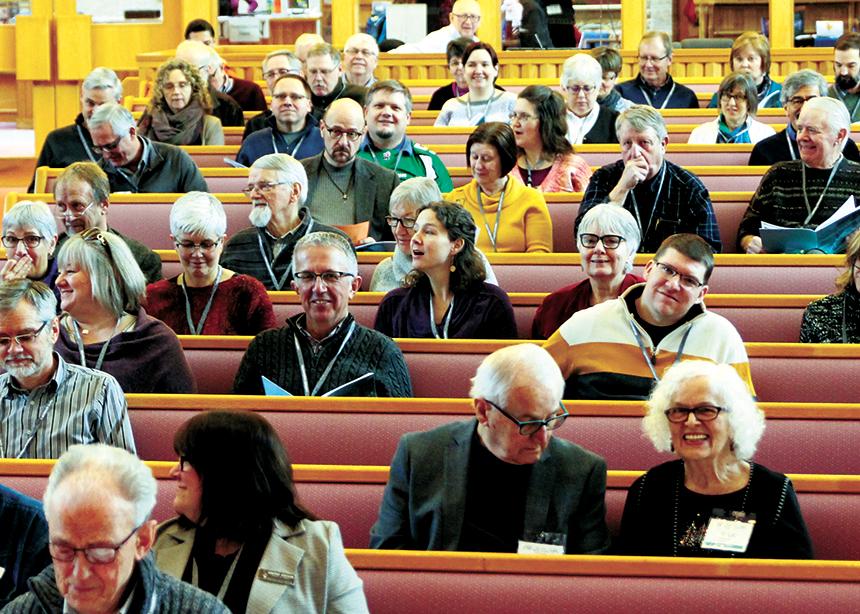 The people of Mennonite Church Manitoba discussed and dreamed what the new structure of MC Canada means for their regional church, at this year’s annual delegate gathering.

Nearly 150 delegates and other attendees representing 35 churches from across Manitoba gathered at Steinbach Mennonite Church on the first weekend in March.

Board member Richard Klassen said that because it was a year of transition between the old and new structures, it is hard to get an accurate picture of donation patterns, and he anticipated that next year’s patterns will be clearer. However, not meeting the budget has been a trend for the last several years, and he noted that MC Manitoba can’t keep this up much longer. He is hoping for a more positive conversation next year.

Both the financial reports and the 2019 budget were presented in a new format, as part of a standardized reporting happening in several regional churches. In the new budget format, amounts put towards partner ministry support, such as MC Canada and Canadian Mennonite University (CMU are listed under revenue, which created a point of confusion for some attendees. Klassen explained that it is an attempt to have the budget show clearly that MC Manitoba’s priorities are just as much about the nationwide church as the regional church.

Camps with Meaning (CwM) is now doing its own bookkeeping and has a separate budget from that of the regional church. When asked whether this means that CwM was not a regional church program anymore, Klassen assured delegates that MC Manitoba is still 100-percent committed to the camps but wants to give them freedom to operate. In the future, delegates will receive camp financial statements and budgets as well.

Congregational donations are set at $975,000 for 2019. One concern is how this will affect CwM, which was allotted $125,000 in the budget, less than what the camping ministry had requested. CwM is essentially being asked to do more, but with the same financial contribution, it was voiced from the floor.

Judith Friesen Epp, co-pastor of Home Street Mennonite Church, asked about the pain it is causing camp staff when the regional church can’t meet their needs, while their camper numbers are dropping.

Ken Warkentin, MC Manitoba’s executive minister, admitted there is extra pressure on CwM, but he said the regional church is working with what it has, and couldn’t afford to give more in addition to its other commitments.

Dave Wiebe, a delegate from Springstein Mennonite Church, followed this by sharing small actions congregants in MC Manitoba churches can take to help CwM in a substantial way. They include churches sending one extra child from their congregations to camp, hosting one fundraiser a year, or donating as little as $20 a month through the Club 84 initiative.

MC Manitoba will be looking to hire for a church engagement position that was deferred last year due to budget constraints.

The budget was passed with no opposition.

The nomination slate for 2019, including delegate nominations for the MC Canada biannual gathering, was also approved.

More than just a business meeting

The day began with worship, singing and hearing stories about congregational life, followed by communion, a reminder that congregants are the body of Christ together and part of a larger church community.

Three afternoon workshops covered updates from CwM, MC Canada in this new era, and leadership development, including the new master of divinity program at CMU.

Henry Paetkau, interim executive minister of MC Canada, said at the MC Canada workshop that there are challenges with the transition, but that things are slowly becoming clearer. He reported that there is more interpersonal interaction between the regional churches, especially among leaders.

Warkentin agreed that MC Manitoba is more aware of what is happening in other regions now and is sharing resources across the country. “Before the restructuring we thought of ourselves as separate entities, not knowing much about each other,” said Paetkau. “Now we are envisioning ourselves as one body with many parts.” 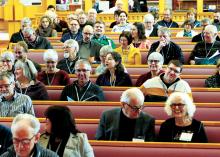 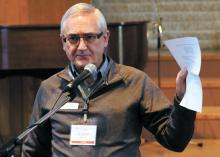 Henry Paetkau, interim executive minister of MC Canada, holds the covenant document between the regional churches that make up MC Canada. He said they are now more connected with each other than before. (Photo by Darryl Neustaedter Barg) 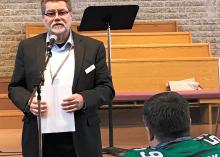 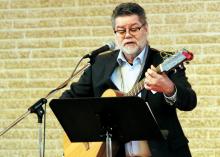 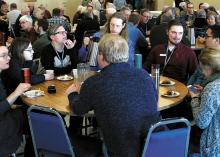 Delegates connect with each other over morning coffee at the MC Manitoba annual general meeting. (Photo by Darryl Neustaedter Barg)