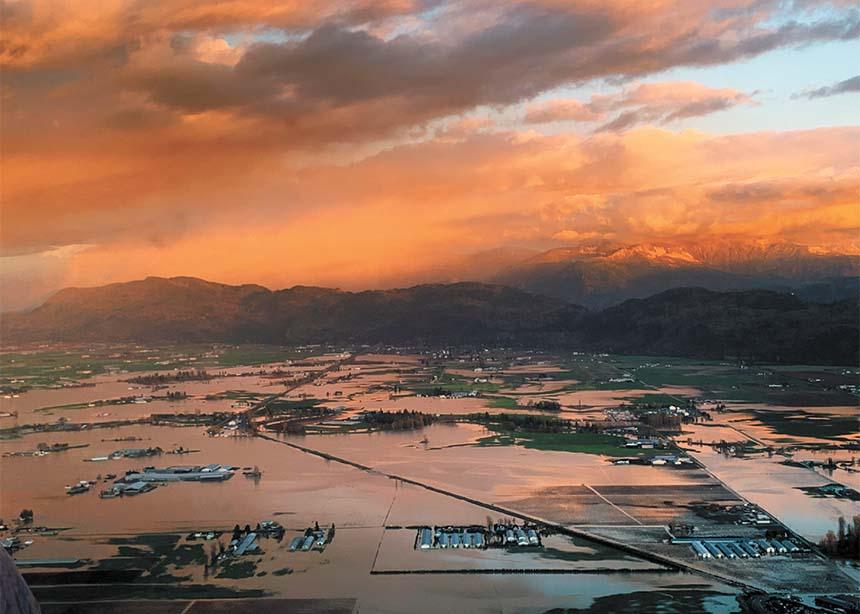 The Sumas Prairie is pictured in the beginning stages of the refilling of Sumas Lake. At this point in time, the worst flooding was further to the west but, after the dike was breached, this area filled up with more water. (Photo by Elaine Binnema)

As catastrophic rains pummelled the Lower Mainland of British Columbia in mid-November, causing massive flooding and mudslides that deposited debris over local highways, Mennonites in the community experienced both uncertainty and loss, and they responded with compassion and a willingness to help others.

When the Barrowtown Pump Station—critical to keeping Sumas Lake from reforming—was in danger of failing on Nov. 17, Sean Regehr, a member of Yarrow United Mennonite Church, was among those helping to deliver and fill sandbags to help save the station. The next day, the Yarrow congregation began organizing volunteers to help sandbag homes and farms in the community and provided coffee and baked goods in the church basement for them.

Yarrow residents Barbara Nickel and Bevan Voth, members of Emmanuel Mennonite Church in Abbotsford, came home on the evening of Nov. 14 to the threat of water filling their crawl space.

“I stayed up all night taking about two to three gallons of water out of the sump-pump hole every 15 minutes,” Nickel said. “People down the street had crawl spaces and garages flooded. We’re thankful our house wasn’t damaged.”

The family thought all was well by Nov. 16, when the lake on their street had dried up, but then they received an evacuation order from the City of Chilliwack, due to the threat of the Barrowtown Pump Station failing, and they moved out temporarily to stay with friends on Chilliwack Mountain.

Nickel noted that many people have reached out to inquire about the welfare of B.C. residents and say they are praying for those affected. “We’re so grateful for that, and for our friends who took us in when we were evacuated, and for the amazing efforts by all the volunteers and engineers working ’round the clock to get things back to normal,” she added.

Many Abbotsford residents did not directly feel the effects of the flood, other than experiencing long lines in grocery stores and shortages of some supplies due to panic buying and the closure of grocery stores on the east end of town. Due to fuel shortages, the B.C. government was limiting motorists to 30 litres of gas per customer by the Nov. 20-21 weekend.

Meanwhile, volunteers from Columbia Bible College’s Trek program volunteered their services to help clean out lockers from a storage facility on Highway 11 between Abbotsford and Mission. According to a post on Facebook by Kathy Peters, the students emptied the contents of her locker, swept out the lockers, put down pallets, returned undamaged items to the lockers and helped sort through damaged items that were either repackaged or dumped.

“Without wanting to sound too dramatic, they were quite literally angels from heaven sent in answer to prayer,” wrote Peters.

As well as individuals, institutions were also responding to the crisis.

Mennonite Central Committee (MCC) B.C. executive director Wayne Bremner issued a statement that said in part: “Our hearts go out to communities that are underwater, facing evacuation orders, or cut off by landslides and washed-out roads. At MCC we have reached out to Mennonite Disaster Service (MDS) to coordinate and to offer our support as they discern next steps. As sister organizations, we have complementary mandates. MCC leads during international disasters and MDS during local disasters.

“So far, our locations in 10 different communities are not directly affected by flooding and our staff and volunteers who have come in for work are safe. On the other hand, a number of our staff, volunteers and supporters are cut off by washed-out roads and flooding, and some face evacuation orders and serious challenges.”

A news release from MDS said: “Mennonite Disaster Service (MDS) is monitoring the situation in B.C., where torrential rains have caused flooding and mudslides that have affected many communities and residents. With the water still yet to recede, and some communities still cut off from access due to damaged or destroyed roads and bridges, it’s too early to be doing any kind of assessment on what we can do,’ said Ross Penner, who directs Canadian operations.”

This article appears in the Dec. 6, 2021 print issue, with the headline “When the rains came down.” Do you have a story idea about Mennonites in B.C.? Send it to Amy Rinner Waddell at bc@canadianmennonite.org. 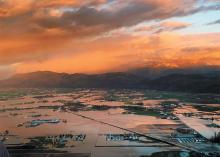 The Sumas Prairie is pictured in the beginning stages of the refilling of Sumas Lake. At this point in time, the worst flooding was further to the west but, after the dike was breached, this area filled up with more water. (Photo by Elaine Binnema) 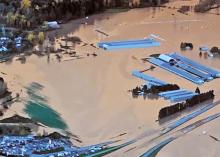 The submerged interchange of Highway 1 and Whatcom Road in Abbotsford. (Photo by Elaine Binnema) 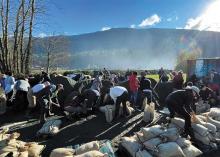 A member of Yarrow United Mennonite Church was among those working through the night sandbagging to help save the Barrowtown Pump Station. (Photo courtesy of Darnell Barkman) 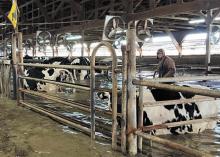 The Barg farm just east of Chilliwack was spared from flooding, and was able to take in the cows from this flooded barn. The Bargs attend Eden Mennonite Church in Chilliwack. Mary reports, ‘We are holding up okay, finding a rhythm with our new herd, working hard to coordinate with and support the efforts to continue to evacuate cows that are stranded.’ She says the farmer was ‘pretty thankful to be able to save all of his animals, including the chickens, and he even was able to leave some food for the barn cats in the hayloft.’ (Photo by Mary Barg) 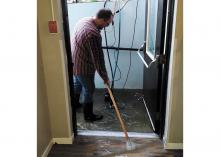 Eden Mennonite Church in Chilliwack had its basement flooded in mid-November. Pictured squeegeeing up is Calvin Patterson. More than 90 percent of the basement was covered in a few inches of water. Since the basement has been the site of two local food-based ministries to seniors and students during the pandemic, there was a lot of food to quickly move to safety after the flood. (Photo by Aaron Roorda) 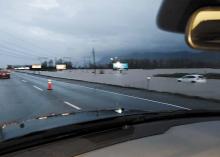 Aaron Roorda, pastor of Eden Mennonite Church in Chilliwack, took this photograph on his commute home from Abbotsford along Highway 1 on the evening of Nov. 15. The highway was closed 15 minutes later. The river of water to the right of his truck was the centre of the roadway between the east- and west-bound lanes. (Photo by Aaron Roorda)

Seems like we are experiencing what might be identified as a "perfect storm" in B.C., a union of science (climate change), nature (water of Biblical proportions), faith group recognition of climate change (MC Canada), and justice (MC B.C. acknowledgement of squatting on Indigenous unceded lands).

On Nov. 04/21, Mennonite Church Canada leadership openly avowed that climate change is real and urgent. Their statement was supported by the moderator of MC Canada and the six executive ministers, the spiritual leaders of the various Canadian conferences and divisions. This is refreshing union of science and religion and bears much promise for the future.

Amy Rinner Waddell writes in a CM article of Nov. 17/21 entitled "MC B.C. posts land acknowledgment statement which reads, "We respectfully and gratefully acknowledge that we gather on the unceded traditional and ancestral lands of Indigenous First Nations." This statement implies that an injustice has happened, that we are a part of it, and perhaps that we will do something about it, even in the Sumas Lake region.

Rinner Waddell also writes in a subsequent Dec. 01/21 CM article entitled "Massive B.C. Flooding affects Menno community," referencing the flooding of the "Sumas Prairie" and the many Mennonites affected by flooding in lower mainland of B.C.

Although the reality of the flooding is that the lives/economies of many people have been seriously disrupted, it may be that MC Church Canada will take the opportunity to respond to this event on a climate change level as well as on a justice level in regards to Mennonite congregants occupying Indigenous lands.

The foresight of MC Canada spiritual leadership statement on climate change which preceded the catastrophic flooding in B.C., and the MC B.C. statement of occupying unceded Indigenous lands, seems to be timely intrusions of God speaking to the hearts of men, more than just a fortuitous synergy. Let's hope that we will not continue with the "business as usual" of restoring the efforts of empire building. It seems to me that would be a missed opportunity. Here is an opportunity to respond to climate change and justice at the same time.