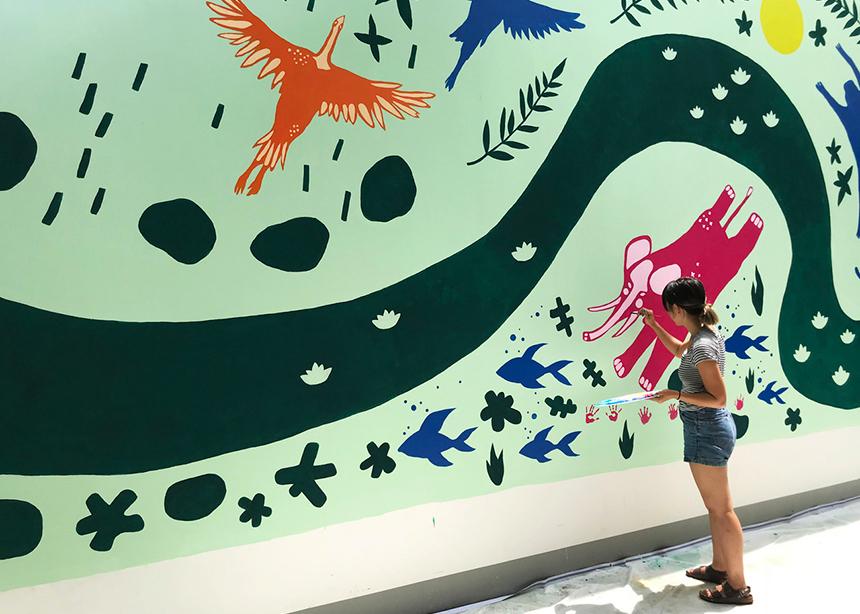 Over the years, Park has worked in numerous media, including acrylic paint and ink. Today she primarily does digital illustration.

If she would describe her art, it would be “nature incorporated with womanhood, coming of age experiences and pops of colour,” but she draws inspiration from a number of places.

Park’s art is partly inspired by her Korean heritage and culture.

“I’m finding a lot of inspiration in my own identity as a Korean immigrant woman,” she says. “You’ll see in some of my pieces there’s a red sun and blue background, with waves in the front. If you see traditional Korean paintings, you’ll see curly clouds and waves twirling through mountains. The colours, too, are really particular. Many of my pieces draw themes from Korean folklore.”

She is also inspired by past experiences. From 2017 to 2018, she took part in Mennonite Central Committee’s Serving and Learning Together (SALT) program. She served with an organization called Women Peacemakers in Phnom Penh, Cambodia.

Taking part in SALT was an exercise in living out her faith, she says, by experiencing the reality of advocacy outside of an ideal college environment.

“As an undergrad, I was actively involved working as a leader of international students, an intern and participant for anti-racism workshops and organizations, attending protests, et cetera,” she says. “While I wanted to learn about a different culture and build friendships internationally, I also wanted to see if I would still be the human-rights advocate out of my comfort zone.”

Although she learned a great deal from the experience, she says that parts were challenging: “In Cambodia, I had such low self-esteem because of my body. I had some mild depression and I felt so dissatisfied with myself.”

That’s why she was inspired to draw women, especially nude women. She says it was an exercise in body positivity: “For most women, when we look in the mirror, we pick at our flaws. That’s what keeps inspiring me to draw nude bodies. They’re naked, they’re beautiful and it is what it is.”

In addition to inspiring some of her work, Park’s experience in Cambodia contributed to her desire to create so voraciously now. While she was at work or at home with her host family, she didn’t have any of her usual art supplies.

“That’s when I started doodling on my computer in Photoshop,” she says. “I didn’t even have a mouse, I just used my track pad. I think there are always opportunities to create, but I didn’t have the same environment that I was used to. When I was working in my office, I thought, ‘What can I do in my spare time to make something for myself?’ And that’s when I started drawing.”

From there, Park had the opportunity to paint a mural at a school inspired by the Mekong River that flows through the Southeast Asian country, along with the animals that are common in the region, including elephants, water buffalo, cranes and monkeys.

Even that was different from what she was used to, since she didn’t have the supplies she normally used and she was always too warm and slightly uncomfortable.

“It taught me how to be flexible, how to weave myself into spaces that need creativity, and how to be creative when given different resources,” she says.

But when she returned home to Abbotsford after her SALT term was over, those challenges needed to come out of her in some way.

“I think all the frustrations exploded when I came back home, and that’s when I started to create,” she says. “That’s when I put all my stresses into a creative energy.”

For her, making art wasn’t like self-care, it was just something that needed to happen. “It’s more like breathing,” she says. “It’s not a grandiose act of art, it’s just breathing. You just do it, like drinking water or eating. It’s something I have to keep on doing,”

Park will spend part of the summer bringing together her love for art and experiencing new things in a familiar place. She’s returning to Cambodia to work with Women Peacemakers, teaching photography classes to help Vietnamese people living in Cambodia to document their community. She will also be painting murals and gathering more fodder for her imagination. 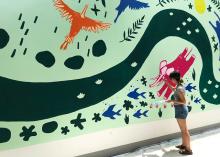