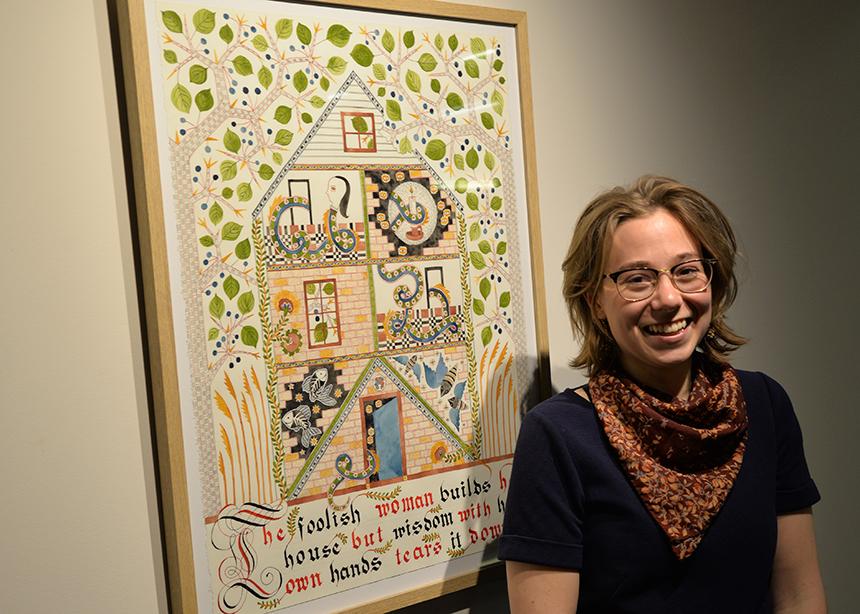 Meg Harder’s six-piece exhibit, “New Fraktur,” draws on the detailed, illuminated calligraphy that was historically produced by early Mennonites and Hutterites, including those who settled in Ontario. She uses fraktur art to bring together her ancestral traditions with contemporary thoughts and concerns.

Historically, fraktur was made to show reverence to important religious and cultural texts, but the art appeared everywhere, from people’s walls to the covers of Bibles and hymnals.

The 29-year-old says she was captivated by the aesthetic of the art, in particular the balancing of the colour and beauty with the darkness of the themes.

“There’s something a bit menacing about it,” she says. “I was interested to take on that style and see how I could work with it in a contemporary context.”

Harder’s ink and gouache drawings draw on the esthetic of fraktur art by mimicking the calligraphy, colour and some of the imagery, but they reframe the images through decolonial and feminist theories, as well as gender and sexuality lenses.

One piece called “The House” pictures a home typical to the Kitchener, Ont., area. It is surrounded by plants that are invasive to the area, including buckthorn and phragmites, which point to the ecological disruption associated with a post-colonial landscape.

“The plants are meant to situate the art in a bioregional context,” she says. “The invasive species are connected to a history of environmental degradation and disturbance in the region. They signal a colonial legacy.”

The house is shown to be degraded, and Harder includes an inverted proverb from the Bible: “The foolish woman builds her house but wisdom with her own hands tears it down.”

“I was thinking of domesticity and breaking down what that’s meant for women historically,” she says, referring to the degenerating house. “The proverb suggests it might sometimes be wise to tear open and make space for new things.”

Harder says this exhibit is also an attempt to address the colonial reality of the region. She grew up in Southern Ontario in a Mennonite family who thrived after settling in the province. That’s due, in part, she says, to the Haldimand Treaty, which was signed with the Haudenosaunee, also known as Six Nations, in 1784, but is still disputed today.

Most of the Haldimand Tract was sold or leased to settlers in blocks that were later developed into farms and then towns and cities.

By 1847, the Six Nations occupied only 4.8 percent of the original Haldimand Tract.

“The land was purchased through somewhat nefarious means, and Mennonite settlements in the region led to the displacement of Indigenous people locally,” Harder says. “Mennonites have done well here. We’ve really prospered, and I’m the beneficiary of that prosperous culture. I feel some responsibility to look at that more closely. It’s important for me not to walk away from that [but] to grapple with the complexity of that reality.”

Amy Zavitz, the coordinator of the Centre for Peace Advancement at Conrad Grebel University College in Waterloo, where the exhibit is on display until Oct. 25, says Harder’s work fits well within the gallery’s mandate to be a place to craft, record, map and perform the stories of peacemaking and to hear the voice of others.

“ ‘New Fraktur’ advances peace by challenging visitors to think critically about the land we reside on and problematic narratives that exist within larger systems of injustice,” she says.

Harder says she hopes that her art will prompt others to look deeply and honestly into their family’s history and what life can look like moving forward. “I feel like I’m part of a larger movement of people who are looking at the narrative we carry with us as Mennonites and re-examining their truth,” she says, adding, “Thinking about how we can work together as a community to build peace in the places we live, I hope my art continues that conversation of perpetual re-examination of who we are and who we want to be in the future.” 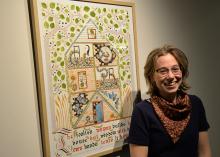