‘Is God still messing with us?’ 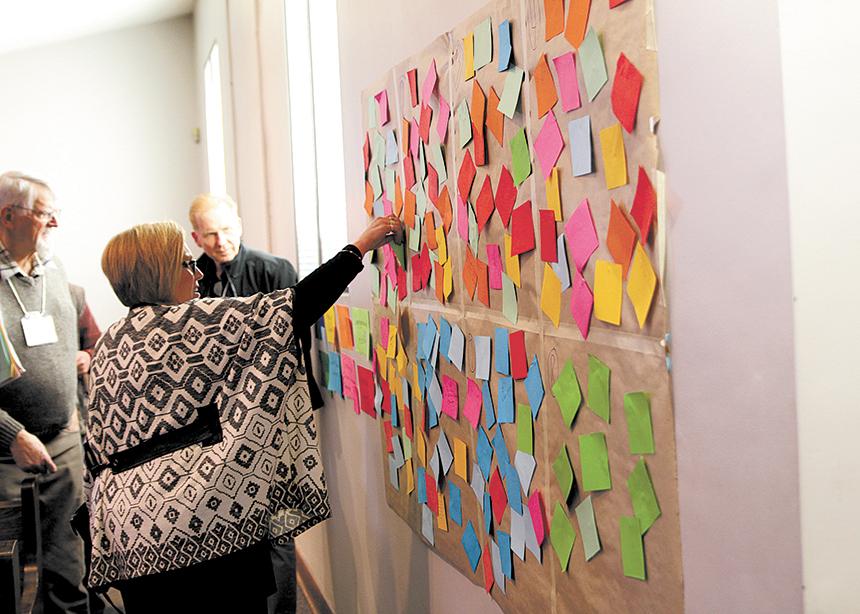 Donna Slobodzian of Springstein Mennonite Church was one of many delegates and attendees at this year’s Mennonite Church Manitoba annual delegate gathering in Winnipeg to rank the seven priorities for the regional church. (Photo by Darryl Neustaedter Barg)

“Is God still in the business of breaking into people’s lives? Is God still messing with us?” asked Brian Bauman during the opening worship service at Mennonite Church Manitoba’s annual general meeting. Bauman, MC Eastern Canada’s mission minister, called the people of MC Manitoba to discern where God is working in their church and what they are doing about it.

More than 110 delegates representing 32 congregations from across Manitoba gathered at First Mennonite Church in Winnipeg on the first weekend in March to respond to this call and discuss how to “Live into our call,” the theme of the 2018 gathering.

A point of concern preceding the meetings was the proposed $2-million regional church budget for 2018, which is $450,000 more than last year. This is because MC Manitoba is now asking churches to combine the funds they used to send to the regional and nationwide churches individually and send them all to MC Manitoba.

Some questioned the $425,000 allotment for MC Canada since the nationwide church’s role has been significantly reduced over the past year. Ken Warkentin, MC Manitoba’s executive minister, says this is because the regional and nationwide churches have been underfunded in the past and because there is still much work to support. Besides the money for MC Canada, MC Manitoba proposed to allot $100,000 for Canadian Mennonite University, $65,000 for new regional church staff, and $10,000 for delegate costs to the next MC Canada assembly.

When it came time for a vote, the revised proposed budget was passed with only one delegate opposed.

In addition to church business and worship, delegates took in various workshops, covering a variety of topics such as medical assistance in dying, MC Canada and International Witness, MC Manitoba’s relationship with CMU, and the future of Camps with Meaning.

A workshop exploring regional church priorities guided the collective vision for the rest of the meetings. Board members Alex Tiessen and Katrina Woelk encouraged participants to rank the seven priorities presented by the MC Manitoba board and staff at last fall’s delegate gathering. What seemed to be just an explosion of different colours all over the chart turned out to have patterns and themes. Congregational health and formation of Christian/Anabaptist character were given top priority. Advocacy, education and mission were somewhere in the middle. Wider external linkages, worship and fellowship events, and additional concerns were concentrated at the bottom.

Richard Klassen, another board member, said the scale is a hopeful sign that the regional church is facing the future in the same direction.

Dorothy Fontaine, MC Manitoba’s director of mission, reported on recent developments at Camps with Meaning. Last September, four new cabins were completed at Camp Assiniboia, and Camp Moose Lake was sold to Division Scolaire Franco-Manitobaine, a French school division in Manitoba. All delegates approved the construction of a dike, drainage ditch and pond at Camp Assiniboia that was funded by government sources. The next steps to develop the camp also include a new maintenance shop and moving Camp Moose Lake’s picnic shelter to Camp Assiniboia. Camp Koinonia continues to operate under the management of a team of dedicated local residents.

Kathy Giesbrecht, associate director of leadership ministries, reported that its biggest investments this year were on youth, young adults and their pastors. Events included a youth/young-adult pastors retreat, winter youth retreats and continued support of the University of Manitoba’s “Menno Office,” a safe space for students to discuss faith, eat meals and hang out. Giesbrecht reported that the programs MC Manitoba is putting time and energy into are bearing beautiful fruit, since “youth and young adults are investing in us, too.”

Changes in staff and church memberships were also recognized at the gathering: 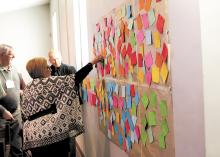 Donna Slobodzian of Springstein Mennonite Church was one of many delegates and attendees at this year’s Mennonite Church Manitoba annual delegate gathering in Winnipeg to rank the seven priorities for the regional church. (Photo by Darryl Neustaedter Barg) 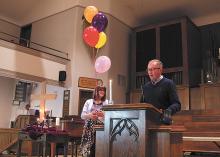