Keeping the arts alive during the pandemic

Theatre of the Beat reaches out to audiences through audio drama 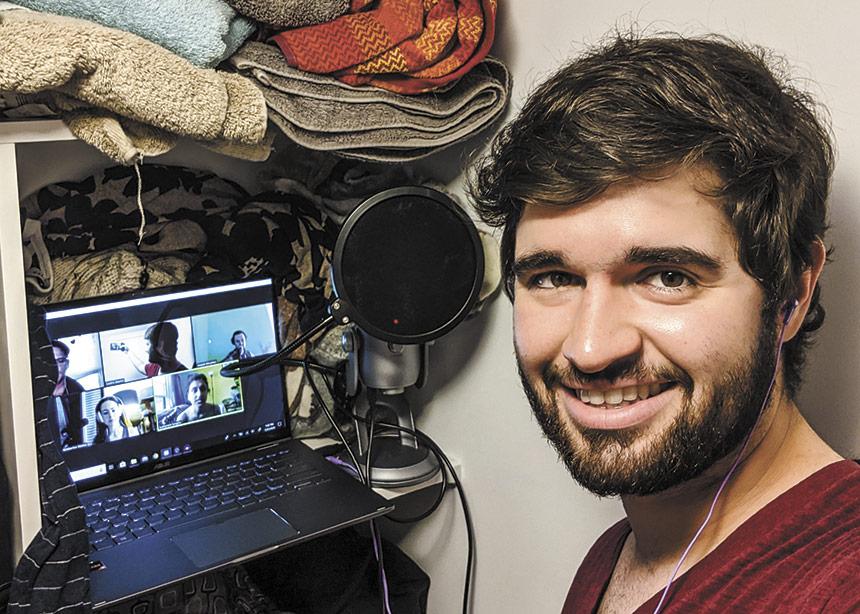 Cedric Martin, artistic producer of Theatre of the Beat, knows that live theatre “will be one of the last gatherings to be allowed again” as businesses reopen in the shadow of COVID-19. That reality forced the staff of the Canadian touring company to get creative.

With the goal “to keep the arts alive and [their] community engaged,” he says the company adapted its stage version of Yellow Bellies into an audio drama series “that can be enjoyed while physically distancing.” The historical play, written by Johnny Wideman and Rebecca Steiner, “highlights the experiences and public response to Mennonite conscientious objectors during World War II.” It features verbatim interviews as well as fictionalized scenes “from an often overlooked chapter of Canadian history.”

To turn Yellow Bellies into an audio drama the troupe “started from scratch,” according to Martin, hiring a new director, Sukhpreet Sangha, and Michal Heuston, an editor who was new to the project. It tapped into connections at CBC Podcasts for advice, and reached back to the “origins of this format, radio plays” for techniques like the use of foley (sound effects), panning (use of left/right speakers), and layering audio.

There were no changes made to the script, but a whole new recording of the show, including new versions of music that conscientious objectors (COs) would have sung, was made while cast and crew were physically distancing from each other.

The cast and crew rehearsed over Zoom but used professional microphones to record individually on separate devices. Martin found the best place to record was in his tiny closet, where his clothes helped to dampen the sound. They combined all the local recordings, layered in sound effects and music, and mixed it together to create the audio drama as three half-hour episodes.

Audiences can simply enjoy the radio drama as a piece of theatre art, or they can engage with a group using a study guide designed by Theatre of the Beat, ideal for youth and adult church programming, family discussions, community forums or school at home. The company will even provide a facilitator to lead the discussion, if desired.

Martin says Yellow Bellies connects to current conversations around anti-Black racism, discrimination and white privilege: “This audio drama looks at the topic of discrimination against Mennonites. It is very relevant today . . . because it reminds us that we [Mennonites] once faced discrimination for our faith and our beliefs . . . so it should be our duty to now stand up for those who are facing discrimination.” He adds that the company “has made a commitment to hire and tell the stories of more Black, Indigenous and people of colour moving forward.”

Several churches, youth groups and individuals have already purchased the audio play, which became available in late June. Of note, Martin says, is a long-term-care home looking for programming for its 350 residents, several of whom were COs. He also heard positive feedback from a church with a visually impaired participant, who appreciated the accessibility of this program.

Martin says the theatre’s staff have been “busy during the pandemic . . . using this time wisely.” Forced to postpone its tour of Selah’s Song, an original musical on the topic of peace, Theatre of the Beat created an online Selah’s Song night, a video that is still available on its YouTube channel, which includes several songs by Bryan Moyer Suderman.

The company hopes to tour Selah’s Song in 2021 if possible, but will also apply for grants to create more digital content to reach audiences, imagining it could even offer “hybrid programs” which some could listen to in person, and some from home. Also in the works is a production of the play Captivity, which tells the James Loney story. Loney and four other activists with Christian Peacemaker Teams were kidnapped and held for ransom during the Iraq War.

Information and package options for Yellow Bellies the Audio Drama are available online at theatreofthebeat.ca. Read a 2017 review of Yellow Bellies at canadianmennonite.org/stories/audience-finds-co-play-deeply-moving.

Related stories:
Prayer ‘keeps us going’
When pandemics are disasters, MDS is there
COVID-19 outbreak in Bolivian colonies
Churches cautiously resume worship together 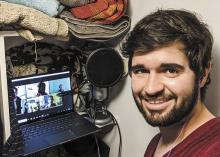 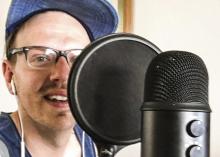 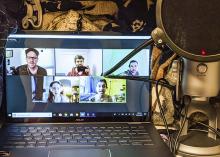 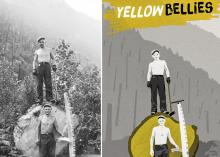 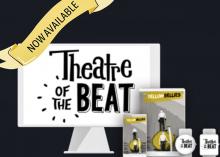 A promotional poster for Yellow Bellies the Audio Drama. (Photo courtesy of Theatre of the Beat)