Face-to-face meetings working for some in B.C. 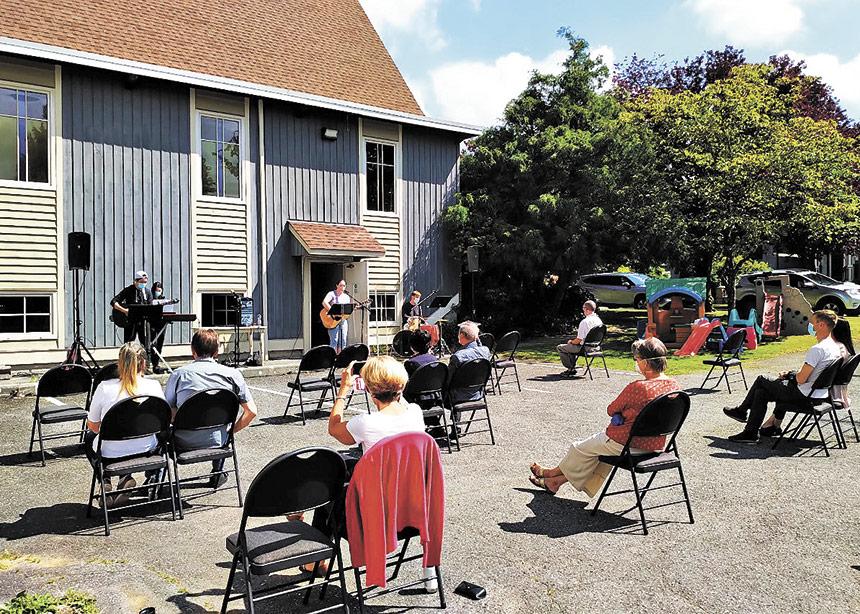 Members of Sherbrooke Mennonite in Vancouver met for an outdoor worship service on July 5. They followed provincial protocols by encouraging masks and discouraging strong singing, and with worship leaders behind plexiglass. The parking lot location allowed sensitive members to stay in cars. (Photo by Garry Janzen)

With most churches remaining closed four months into the pandemic, some in Mennonite Church British Columbia are finding innovative ways to worship together—with limitations.

On July 5, members of Sherbrooke Mennonite Church in Vancouver held an outdoor service in the church parking lot, their first physical gathering since March.

“We took advantage of the good weather and took a break from Zoom,” says Kevin Barkowsky, the church’s interim pastor. “People loved seeing each other in 3D and there was no Zoom delay.”

With provincial protocols limiting gatherings to 50 people, the July 5 holiday weekend was selected as a trial because more people were likely to be away. Those attending had to pre-register with names and addresses that the church is required to keep for one month.

“We had 31 people attend, which is a good number for a first try, because there were things we needed to sort out,” says Barkowsky. “We are thinking we might do it again in three weeks; however, we have to see because there are a number of people who cannot attend because of health risks, who prefer Zoom.”

Another Vancouver congregation, Chinatown Peace Church, began meeting in a local park on June 28, and about half to two-thirds of the congregation have been attending.

“Some are health-care workers and others are spending a great deal of time with senior relatives, so [they] would rather not take any risks by congregating,” says Tim Kuepfer, the English congregation pastor. “To include these, we are also paralleling the service with Zoom, which so far has been a bit awkward, but we’re learning.”

Kuepfer says that being a small congregation means the members value being together as much as possible. “The worship service’s production value and professionalism is less significant for us than is the opportunity for everyone to be there, whether in person or online; hence, we have resisted simply livestreaming the service,” he says.

United Mennonite Church of Black Creek has slowly evolved to holding services in its church building, with precautions. At the start of the pandemic, services were broadcast from the pastor’s home over Facebook Live to the church’s Facebook page. Then the broadcast was moved to the church to make use of the sound system, with several people leading worship.

“Some people in our church do not have Facebook, or even computers at all, so I invited a handful of people to come to the church so they could be there for the live broadcast,” says Pastor Gerry Binnema.

“As restrictions were loosened, we slowly increased the numbers of people, till at this point we encourage people to come every other week, and watch online the other week. Some people come more often, some people are happy to join us online.”

Binnema says the church is taking precautions by asking people to sanitize their hands upon entry, to sit in every other pew, to wear masks, and to socialize outside rather than gathering in the foyer. Additionally, the church takes a picture of the congregation at the start of the service to aid with contact tracing.

“So far, our gathering size has not exceeded 30, and we have even had a couple of new people join us,” says Binnema. “[This is] the blessing of having a small congregation, and a facility that can handle more people than we have.”

Related stories:
Prayer ‘keeps us going’
When pandemics are disasters, MDS is there
COVID-19 outbreak in Bolivian colonies
Keeping the arts alive during the pandemic 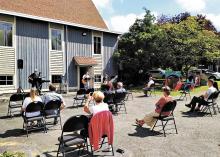 Members of Sherbrooke Mennonite in Vancouver met for an outdoor worship service on July 5. They followed provincial protocols by encouraging masks and discouraging strong singing, and with worship leaders behind plexiglass. The parking lot location allowed sensitive members to stay in cars. (Photo by Garry Janzen)