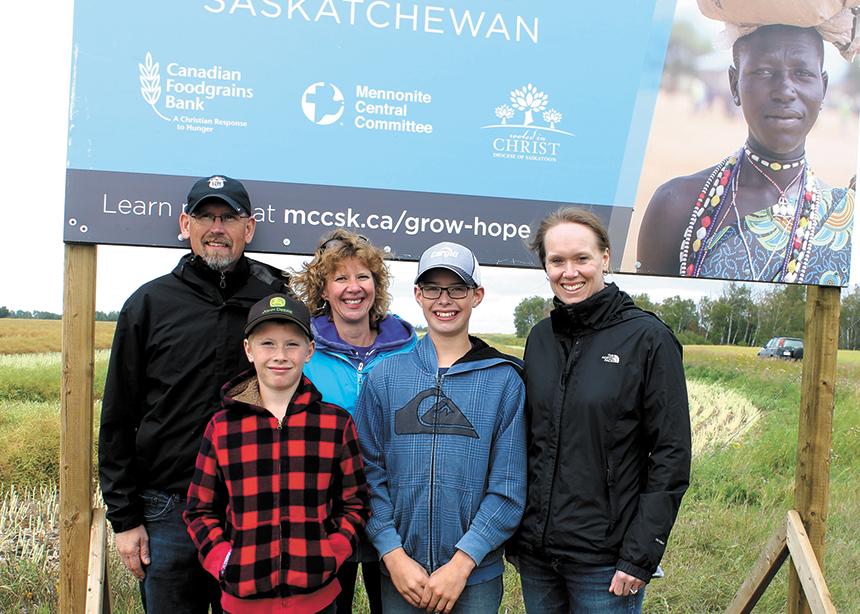 “I’ve never been this close to agriculture before,” said Ingrid Lamp. “It’s quite exciting.” Lamp and her husband travelled four hours from their home in Swift Current to attend the Grow Hope Saskatchewan Field Day.

The Aug. 25 event saw upwards of a hundred Canadian Foodgrains Bank supporters gather in Rosthern for a barbecue lunch and a time of learning about food security issues, both locally and globally.

Olympic medallist Cindy Klassen was the featured speaker. As the first Canadian to win five medals at a single Winter Olympics, Klassen understands the value of partnerships. “I had my teammates who pushed me to work my hardest, coaches who developed programs for me, support staff like strength trainers, nutritionists and sports psychologists,” said Klassen. “All of them came together to help me do my best.” Similarly, it is partnerships that make Grow Hope possible.

Grow Hope is a Foodgrains Bank program that invites individuals, particularly those from urban or non-farming backgrounds, to partner with farmers by sponsoring an acre of farmland. While the program is not new to Ontario and Manitoba, this is its first year of operation in Saskatchewan.

A $300 donation covers input costs for an acre of land. This includes things like seed, fertilizer and fuel. When the crop is harvested at the end of the growing season, it will be worth as much as $500 per acre. The money will be donated to the Foodgrains Bank, and the Government of Canada will then match it at a ratio of up to four-to-one, meaning that a $300 contribution could grow to as much as $2,500.

Nathan and Jeanette Janzen devote one of the fields they farm west of Rosthern to the Foodgrains Bank each year. Together with Nathan’s parents, Vic and Shirley Janzen, they have raised crops for the Foodgrains Bank for many years. This year, through Grow Hope Saskatchewan, urban “farmers” like Lamp and her husband are covering some of the Janzens’ input costs, making it easier for them to continue to give to the Foodgrains Bank.

The Grow Hope Saskatchewan project is also a partnership between MCC Saskatchewan and the Saskatoon Catholic Diocese and its Development and Peace agency.

Partnerships such as these at individual, interdenominational and inter-agency levels are a source of strength. “I feel like our best accomplishments are made possible because of the contributions of the collective,” said Klassen.

Another theme she addressed was that of hospitality. “There’s this image going round the internet these days that says, ‘When you have more than you need, build a bigger table not a higher fence,’ ” said Klassen.

The Grow Hope project is a demonstration of both generosity and hospitality. “We are building a bigger table that reaches from Saskatchewan to Syria and Lebanon, to Bangladesh and Nepal, to Ethiopia and Congo and South Sudan,” she said. “We are demonstrating our care and compassion for people we will probably never meet, and we want them to know that they are not alone. They are welcome at our table. And the table can continue to grow as more and more people choose to grow hope.”

In addition to a trip to the Grow Hope field to see the acres they were sponsoring, participants learned about local food security issues with a tour of the Good Neighbours Food Centre, operated by the Rosthern and District Food Bank.

The centre serves people in need within a 30-kilometre radius of the community. Up to 800 adults and children receive emergency food hampers each month, but the centre is also home to hunger prevention programs, such as community gardens and a collective kitchen, where people learn the skills they need to feed themselves. 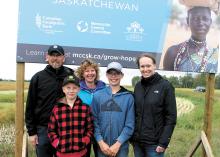 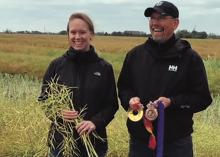 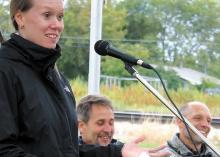 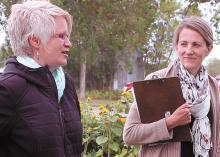 Food security is an issue locally as well as globally. Anita Bergen, interim chair of the Rosthern and District Food Bank, left, and Nadine Ens, the food bank’s community catalyst, tell Grow Hope Saskatchewan field day participants about efforts to alleviate hunger in the Rosthern area. One of the food bank’s projects has been a community garden where Grade 3 students work with seniors to plant, tend and harvest the produce that will feed many. (Photo by Donna Schulz)