Over 900 acres seeded with support from city-dwelling Canadians 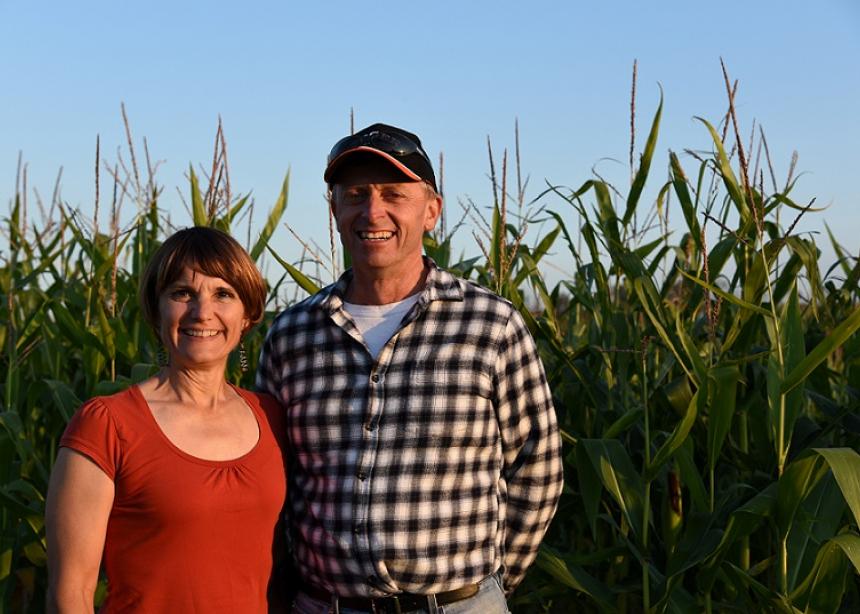 Fifteen acres of wheat and a good cause—that’s what brought nearly 200 people together in Pembina Crossing, Man., in June 2018.

Some drove two hours from Winnipeg, others five minutes from their rural homes. Most came from Anglican church communities in Winnipeg.

“It was a moment where I felt like I was part of something more than I could have ever imagined,” says retired Anglican priest Cathy Campbell. “It was a gathering of people from diverse backgrounds whose hearts were oriented in the same, good way.”

They gathered at a special worship service in the field in celebration of Anglican Grow Hope, a project that brings urban and rural people together in support of ending world hunger.

Grow Hope projects happen when a farmer offers to grow as many acres of a crop as an urban community will sponsor. These sponsorships help cover the costs of inputs like seed and fertilizer, so all the proceeds from the sale of the crop can be donated.

When the crop is harvested, proceeds from the sale are donated to a member of Canadian Foodgrains Bank, to be used in the work of responding to world hunger. Supporters receive updates on how the crop is doing throughout the growing season, and they’re invited to visit the crop and meet the farmer, often around harvest time.

In the case of Anglican Grow Hope, farmer Chris Lea, who is also an Anglican priest, has seeded 15 acres of wheat on his farm in Pembina Crossing. Once the wheat is harvested and sold, the proceeds from its sale will be donated to Primate’s World Relief and Development Fund’s account at the Foodgrains Bank.

“My main goal [for the project] is to get rural and urban people together for a celebration of life, of the crop, of food, of the food industry, and of everyone that’s involved in agriculture—all in an effort to help provide nourishment and food for people who are underprivileged,” says Lea.

“One of the things I realized at the celebration service was that a lot of the city people want to be a part of the Foodgrains Bank to help hungry people, but they just didn’t know how to do it,” he adds.

“But because of the Grow Hope project, they feel like they have a hands-on approach and participation, and they are excited and keep asking, ‘Oh how’s the crop looking?’ and ‘Oh did you get any rain last night?’”

Bringing communities across the country together for a good cause

This year, there are several Grow Hope projects across Canada bringing farmers and non-farmers together in support of ending world hunger.

Altogether, more than 900 acres of farmland are available to sponsor through Grow Hope projects across Canada, with more than five types of crops being grown including wheat, soybeans and corn.

“We do it because we can, because we have the resources,” says Dyck, who has made 40 acres available as part of Grow Hope Niagara.
This is the third year Dyck is donating land for the project.

“One thing that always means a lot to me is the trust that our urban sponsors have in us, and I’m grateful for that,” he says. “People who sponsor acres trust that we will be good stewards, and that’s not something I take lightly.”

“With the collective effort between farmers, donors, and the government, Grow Hope projects are like spinning straw into gold in the effort to help people who are facing hunger due to conflict or disaster,” says Rick Guenther, who directs communications and donor relations at MCC Saskatchewan.

“Building opportunities between people who may not always come together naturally is something we are always interested in, as it changes our society,” adds Myron Rogal, of the Saskatoon Catholic Diocese. “And building those relationships while depressing global hunger is a win-win [situation].”

Further west is Grow Hope Alberta, where several farmers have come together to make more than 200 acres available for sponsorship, with the proceeds going toward MCC Canada’s Foodgrains Bank account.

We’ve all won the lottery here’

One of the highlights of Grow Hope projects is how they bring diverse communities together. That’s not the only highlight, though.

“We’ve all won the lottery here in Canada,” says Lea. “There’s a lot of people out there who tend to forget that or who don’t understand they are the blessed ones in this world, but we could have just as easily been born in South Sudan or other African countries.”

Lea sees Grow Hope as an opportunity for Canadians to share what they can with their neighbours overseas. “That’s how I look at it, and that’s why I think it’s our obligation to acknowledge the gifts we’ve been given here.”

To learn more about how to get involved with a Grow Hope project near you, visit https://foodgrainsbank.ca/grow-hope-cfgb/.

Grow Hope Niagara farmer Larry Dyck hosts city-dwelling sponsors who visit the farm to see the crop and learn more about the project and farming. Their financial support helps cover the cost of seeds and fertilizer so that all proceeds of the crop can be donated to relieve world hunger. (Canadian Foodgrains Bank photo)

Grant Dyck is the main farmer of Canadian Foodgrains Bank’s Grow Hope Manitoba near Niverville, Man. At the annual harvest celebration, he tells urban sponsors about the canola crop he raised to help relieve world hunger. The funds raised in Manitoba go toward the hunger relief efforts of MCC Canada. (Photo by Bethany Daman)