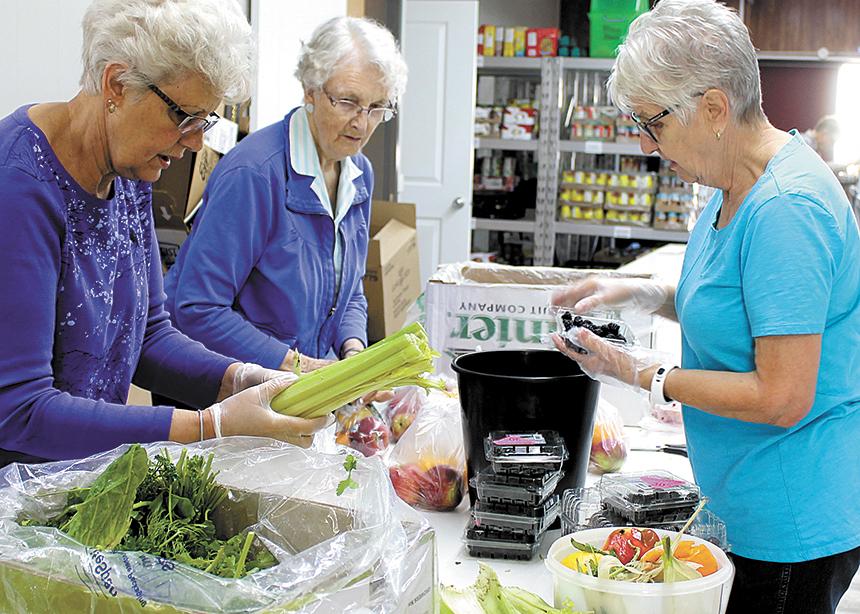 Volunteers Sheila Harder, left, Eileen Flath and Hariette Melin sort through donated produce at the Good Neighbours Food Centre. Whatever isn’t good enough to go into a food hamper will be placed in the food bank’s vermicomposting tower. Nothing is wasted. (Photo by Donna Schulz)

“In my walk with the food bank,” says Wilmer Froese, “I feel like I am putting my faith into action, and doing so in a more deliberate way than I ever have before.”

He and his wife Barb spent many years co-pastoring a number of Mennonite Church Saskatchewan congregations. Now retired from both farming and pastoral work, they have found a new calling—feeding the hungry.

In 2010, the Rosthern ministerial asked Wilmer to look into the feasibility of establishing a food bank. He called a meeting of community leaders. Most agreed there was a need, but some worried the presence of a food bank might give the town a bad reputation.

Wilmer disagreed. “This community is good at developing lifestyle-related activities,” he said, “but not at meeting the needs of the marginalized.” He felt that the way a community cares for its poor says more about it than anything else.

His viewpoint won the day, and in 2011 the Rosthern and District Food Bank began operations out of the basement of the seniors centre. Later, it rented a vacant commercial space for $200 a month.

Arlene Heppner and Valerie White worked alongside Wilmer and asked him to chair their loosely knit committee. Eventually, the food bank incorporated, and the small group grew into a nine-member board of directors. Wilmer still serves as its chair.

The number of people using the food bank gradually increased until the rented space became too crowded. When the local Saskatchewan Valley News closed in January 2017, the Froeses decided to purchase both the building they were renting and the newspaper office next door.

“I always dreamed of a place where teaching and education could take place—not just for food bank users but for others as well—to integrate the marginalized with the rest of the community,” says Wilmer. The former newspaper office would provide such a place.

Following extensive renovations, the food bank moved into its new facility on April 20. The new space boasts a central kitchen and spacious multi-purpose room, in addition to the food hamper assembly and distribution area.

And the education Wilmer dreamed of is already happening. Nadine Ens, the food bank’s community catalyst, developed a program called Planting, Picking and Preserving with Students and Seniors, P3/S2 for short. Experienced gardeners partner with Grade 3 students from Rosthern Elementary School to learn about food production and to grow a garden for the food bank.

Barb points out that hunger is only part of the picture, suggesting that inequality in opportunity, education and transportation is a bigger issue. “You can’t [tell people], ‘Just go get a job,’ ” she says. “A lot of these people are elderly or young moms with children. They are often unemployable and lack education.”

As for perpetuating dependence, the Froeses say this simply doesn’t happen. “Many people come when they need it,” says Wilmer. “They don’t become dependent but come because they have no other resource.” They cite examples of former clients who now serve as volunteers.

“The food bank has opened our eyes to a ‘hidden part’ of our community,” says Barb, “a part we don’t necessarily want to acknowledge or deal with.” But she suggests that when people face that hidden part, they face themselves. “We all could be, and maybe have been, in a position of want or need,” she says, adding, “We have so much in common with the rest of humanity.”

Now known as the Good Neighbours Food Centre, the food bank remains a faith-based organization. Volunteers come from all denominations or from no denomination, and this has stretched Wilmer’s faith. “I have learned that other people may have different understandings of God that may not necessarily be wrong,” he says, and admits to being less rigid and dogmatic than he once was. “People who don’t believe as I do have found their way to God as well,” he adds.

Building relationships with clients is an ongoing challenge. “We’re in a position of power, we’re giving out food,” he says. “We don’t recognize our own white privilege. There needs to be more give and take.”

But give and take requires trust, and trust takes time to build. The end goal is empowerment. “Unless they are empowered in some way, I feel like I haven’t succeeded,” he concludes. 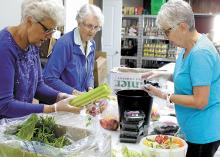 Volunteers Sheila Harder, left, Eileen Flath and Hariette Melin sort through donated produce at the Good Neighbours Food Centre. Whatever isn’t good enough to go into a food hamper will be placed in the food bank’s vermicomposting tower. Nothing is wasted. (Photo by Donna Schulz) 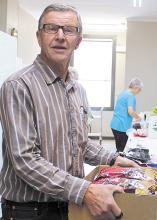 Wilmer Froese hopes the Good Neighbours Food Centre will become a place where the marginalized are incorporated into the community. (Photo by Donna Schulz) 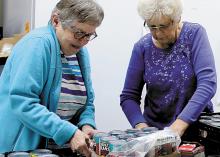 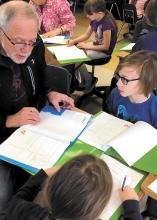 Larry Epp talks with Grade 3 students at Rosthern Elementary School as part of Planting, Picking and Preserving for Students and Seniors (P3/S2), a program of the Good Neighbours Food Centre in which experienced gardeners partner-teach students about growing food. (Rosthern and District Food Bank photo)