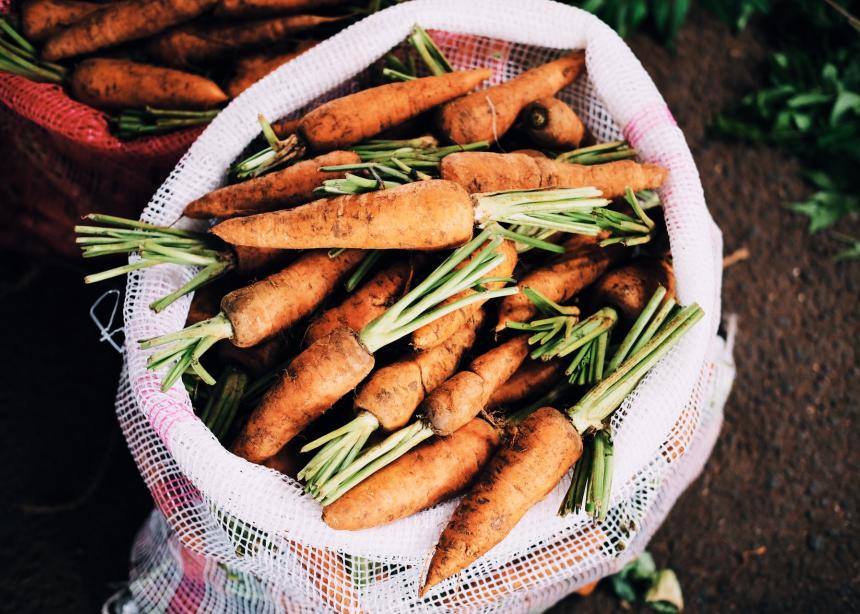 What do city dwellers and farmers have in common? They are all eaters! And, in the Mennonite community, another important characteristic is their shared faith. Yet, despite those commonalities, country and city folk sometimes bring different points of view to the question of how our food is grown.

When your family plans a picnic, you hope for sunny weather. Yet, the farmer growing the vegetables to be served at that picnic table may be desperately praying for rain. How growers and eaters see the weather and the land depends on many—and sometimes conflicting—factors. These could include where they live, where they fall in the food supply chain, whether their financial well-being is tied up with food production, their family’s history on a piece of land, and even their personal tastes in food.

Over the past months, Canadian Mennonite has published some perspectives of eaters and growers. In the March 29 issue, two city dwellers explored the question, “What would Jesus think about factory farms?” In the April 26 issue a young farmer wrote about his experiences on a small farm in Ontario. Readers from British Columbia and Manitoba weighed in through letters to Readers Write, offering more from the farmers’ point of view.

Mennonites have been talking about farming for quite a while. Paging through CM’s back issues, I came to the November 12, 2007, issue, with eight pages dedicated to the topic. One article recalled a two-day conference on agriculture and the land held five years before, at Osler (Sask.) Mennonite Church. Attended by some 300 participants, “Making peace with the land: A country mouse and a city mouse talk about the pantry” led the Mennonite Church Canada assembly delegates to pass a resolution on the subject. It read in part: “Be it resolved [that] the General Board of MC Canada find ongoing ways to encourage and facilitate reflection and action, and the creation of new models, about the production and distribution of food, with a view to strengthening community and well-being.”

In that same issue, Laura Rance, then editor of Manitoba Cooperator, a provincial agricultural publication, argued that “Canadians have to renew the conversation between rural and urban folks, and that the church has a critical role in these issues.”

Years have passed since that resolution, and denominational structures and responsibilities have changed. In recent times, nationwide and regional conversations have focused more on questions around the larger climate crisis rather than on farming itself. But a group in Manitoba has kept the topic alive.

On pages 16 and 17 of this issue, senior writer Will Braun offers an essay originally published in a new book on the topic of farming and food. Titled Germinating Conversations: Stories from a Sustained Rural-Urban Dialogue on Food, Faith, Farming, and the Land, the book documents conversations that have been going on in Manitoba since 2012.

The new book summarizes and reflects on that intentional dialogue initiative. This has been an effort to bring sometimes divergent views to a respectful and faith-based conversation. Inviting deep listening, organizers have sought to build trust and connections amongst diverse participants.

The book’s introduction acknowledges that growers and eaters need to keep talking. “Our gatherings will continue with more listening, discerning, and dialoguing. Carefully, mindfully, we will discern other divides, develop new relationships, build more trust, and agree to talk.” They continue, “We pray that this conversation will continue in the years to come, and that one day we will be speaking not of ‘farm crises’ or ‘eaters’ complacency,’ but of renewed community and our vital reconnection with God, with each other, and with the land that sustains our lives.”

This magazine is committed to helping dialogue like that happen. What do you have to offer to the conversation?

As this issue was being prepared for press, news broke about the discovery of an unmarked burial site containing the remains of more than 200 Indigenous children, near an Indian Residential School in British Columbia.

This is another painful reminder of Canada’s past mistreatment of First Nations peoples. More investigation must happen there and elsewhere, and within our own hearts. For now, we can join in the lament, acknowledging the historic wrongs done as well as the systems that continue to perpetuate injustice. And we can heed the calls for action that are part of Canada’s Truth and Reconciliation process.

Read more editorials:
Hellos and goodbyes
Words and community
What happens when we read together?
Greening the church
The gifts of all