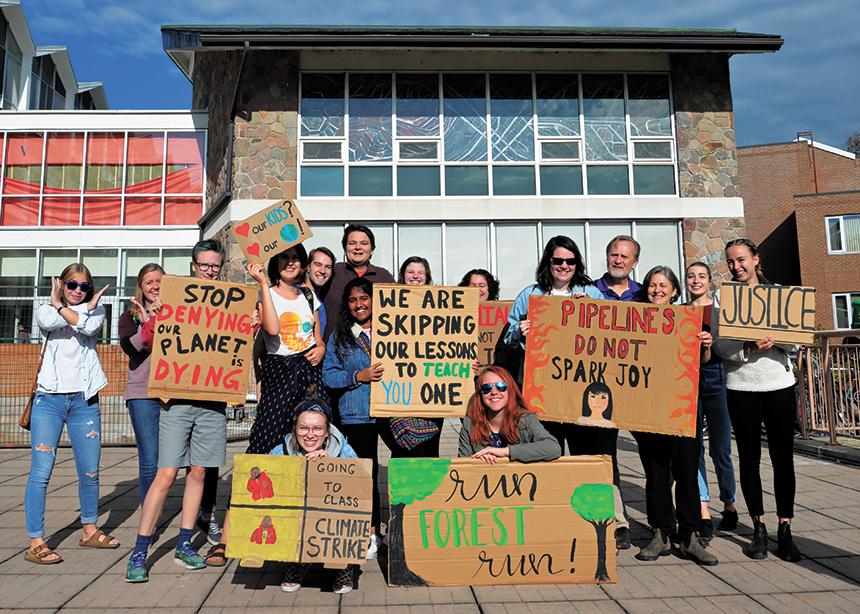 According to the United Nations, “Climate change is the defining issue of our time.”

On Sept. 27, around 80 Grebel students, staff and faculty took part in the Global Climate Strike in Waterloo, at which more than 4,000 people gathered for three hours of singing, chanting and speeches.

Mark Vuorinen, a Grebel music professor, led the KW Symphony and local choirs in performing Beethoven’s “Ode to Joy,” with much of the crowd joining in. This powerful performance evoked an emotional response from many climate strikers.

Speakers from the Indigenous community, local professors, students from every level of education, and others urged the crowd to make changes on an individual level, to fight for change on a systemic level, and to vote for change in the upcoming federal election.

Grebel students attended the strike for a variety of reasons.

“I was motivated to come to the strike because of my privilege,” said Madeleine Neufeld, a fourth-year peace and conflict studies student. “Friends of friends have died in floods in Indonesia this past rainy season because of climate change. They can’t speak up, so I will.”

“Hope comes from action,” remarked Katie Goerzen Sheard, who is in her second year of social development studies. “The actions of people today in K-W and all over the world make me hopeful that we can continue to act and make changes towards living sustainably and justly. This strike was a reminder that we are surrounded by others and we can support each other in making change.”

Grebel has a history of early adaptation for environmental changes. Recycling was introduced in the 1980s, before the blue box recycling program even came to the University of Waterloo, and, in the early 2000s, Grebel’s student council created the position of environment representative.

In 2009, students initiated the installation of solar panels on Grebel’s roof to pre-heat the school’s hot water. The next year, the college was the first participant in a highly successful pilot project that tested institutional-level organic waste collection through the Region of Waterloo’s green bin program.

Last year, a team of students successfully applied for grants to add a green roof to the college’s current kitchen expansion.

Most recently, the Mennonite Archives of Ontario, located in the Milton Good Library at Grebel, closed as a part of the strike to raise awareness of the effects of climate change on cultural heritage and community memory.

This article appears in the Oct. 14, 2019 print issue, with the headline "Hope comes from action." 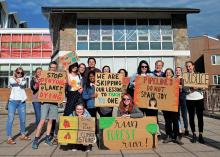