Striking for the future 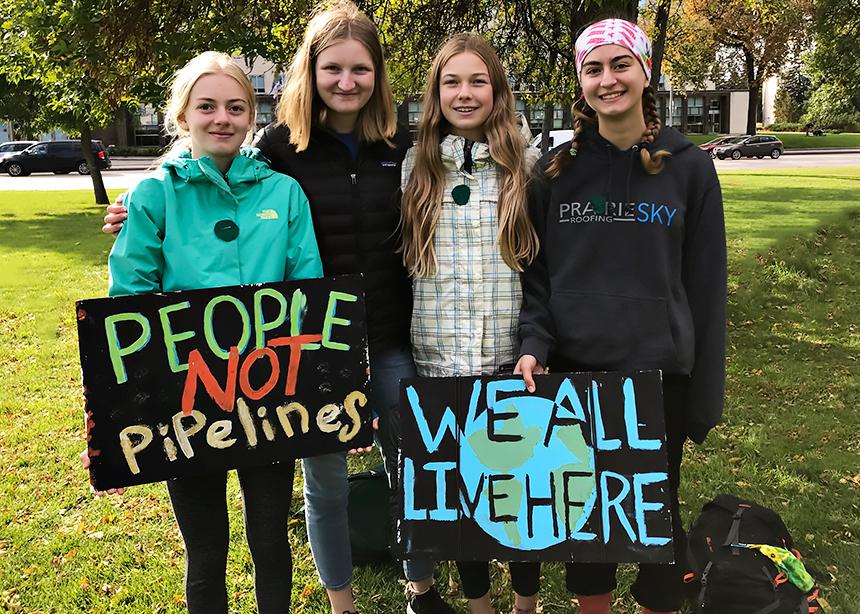 People waved signs saying, “There is no planet B,” “Respect our mother,” and “You will die from old age, we will die from climate change,” as they gathered at the Manitoba legislative building and marched in the streets of downtown Winnipeg.

Among them was Kyle Penner, associate pastor of Grace Mennonite Church in Steinbach, Man. On his sign was the famous image of Dirk Willems reaching out to help his captor who had fallen through the ice—only this time, instead of a drowning human, Willems is saving a polar bear. The placard also proclaimed, “Mennonites on climate strike.”

“I’m here because God called us to care for the Earth,” he said. “And because the wise [Franciscan friar] Richard Rohr says the point of life is to give back that which we have received. We have received a bounteous Earth that has given us an opportunity to thrive and to prosper, and part of our job is to ensure that those opportunities are there for our children, our grandchildren and everyone on the entire planet.”

Those children and youth were present too, fighting for their future. Around 100 students from Westgate Mennonite Collegiate showed up at the rally, in addition to Mennonite youth from many other schools.

Laurel Smith, 14, who attends Kelvin High School and Charleswood Mennonite Church, said she was striking because she wants people to realize they need to take better care of the climate.

Lena Klassen, 14, a Westgate student who attends First Mennonite, agreed: “I’m here because we only have like eight-and-a-half years left, so we need to start now.”

This is the repeated message of Greta Thunberg, the 16-year-old Swedish climate activist: The Earth has only a few years before it passes the point of repairable damage and the planet enters an irreversible chain reaction of climate disaster. Thunberg inspired this global mass movement by leaving school every Friday, initially alone, to sit outside the Swedish Parliament to advocate for climate action. She has inspired not only children and youth, but all ages, to stand up for creation and strike.

“I realized earlier this year that as much as I do little actions for climate change, like carrying my cutlery, my straw, my bag, my thermos, I need to do something big in order to make an actual big difference,” said Sarah Janzen, 26, who attends Home Street Mennonite in Winnipeg. “So I’m here [at the strike] and joining the climate action group at my church to make a bigger difference.”

The rally was full of useful information, motivational speakers, musicians, a march and other activities.

But before the crowds flooded the lawns, the day had already begun elsewhere in a spirit of prayer.

Hundreds of people from all faiths filled two houses of worship close to the rally grounds—Broadway Disciples United Church and All Saints’ Anglican Church—to offer prayers of lament, repentance and hope for the Earth.

A Buddhist chant, references to the Qur’an, words of wisdom from an Indigenous elder and French prayers from the Roman Catholic Church rose up in the sacred space of Broadway Disciples United Church. The Westgate Mennonite Collegiate Concert Choir sang an “Earth song” and Lynell Bergen, pastor of Hope Mennonite, hosted the service. Those gathered beat their hearts in lament singing Pete Seeger’s “Which Side Are You On,” led by a Jewish rabbinat (wife of a rabbi) who sang Hebrew words above the melody. Representatives from the United, Baptist and Christian Reformed churches and the Hindu community were also involved in the service.

He wrote online shortly before the strike, “Because the Earth is in crisis, because tens of thousands of youth have called us—that is why we should strike. Because God so loves this world, and God calls us to be peacemakers who stand against the powers that devour and consume—that is why we strike.”

“It’s an issue of faith because it’s one of our core beliefs that creation was made by God and God gave it to us as a gift,” said Natasha Neustaedter Barg, 21, of Douglas Mennonite, at the strike. “To be here and to be destroying God’s gift is not cool! So we’re here to make a difference for good.” 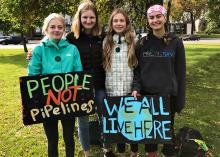 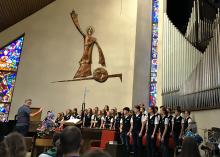 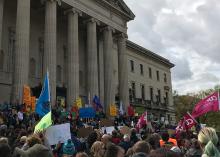 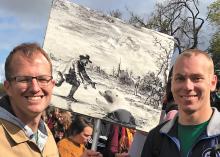 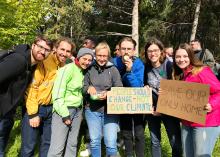 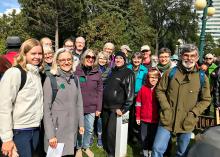 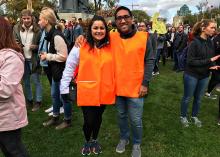 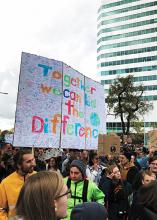