Hope in a dark world 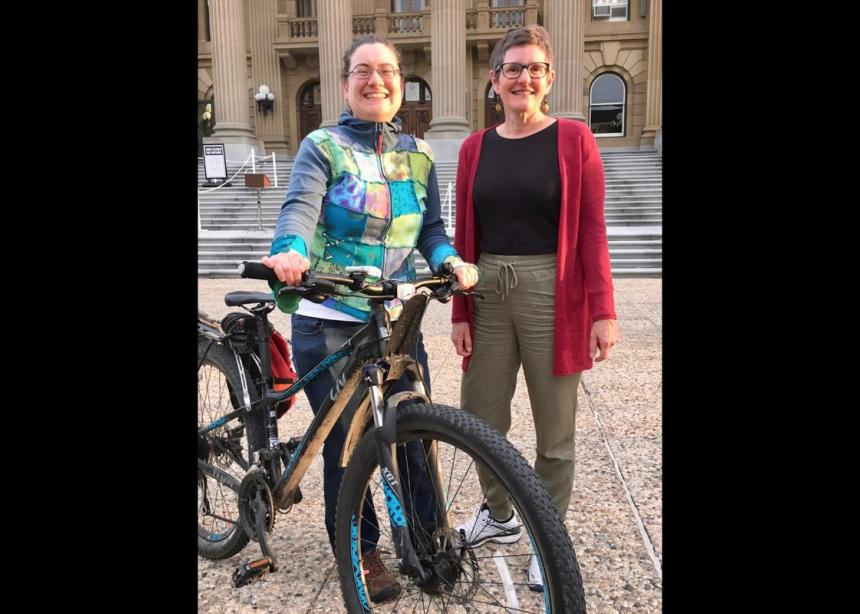 Suzanne Gross, right, of First Mennonite Church in Edmonton, hangs out with Joanne Moyer, who biked to the Interfaith Climate Change Prayer Vigil on Sept. 22 in Edmonton. (Photo by Brian Ladd)

“Beefier barley: Climate change will boost Alberta’s barley yields with less water, and feed more cattle,” said a big billboard appearing to promote the benefits of climate change. It was produced by the University of Alberta last month. Jacqui Tam, vice-president of university relations, resigned, with the school announcing that it had not approved the ad.

Oil and gas is a major industry in Alberta and therefore a major concern for environmentalists.

According to Joanne Moyer, one of two Canadian representatives on the North American Mennonite Creation Care Network, and assistant professor of environmental studies and geography at King’s University in Edmonton, “Living in Alberta makes it that much harder for those who understand and care about environmental issues.”

The network, a joint venture of Mennonite Church Canada and MC U.S.A., claims that “God was green before being green was popular,” and that part of being an Anabaptist disciple is reconciling all things through the cross, including the Earth.

Being brought up as a child of Mennonite missionaries in Tanzania and then receiving a strong sense of God as creator at summer camp each year, meant “my faith is wrapped up in nature. I was taught that if we hurt creation, we are hurting God,” she said.

Moyer and Edmonton-area Mennonites participated in, and helped organize, an interfaith climate-change prayer vigil on Sept. 22 at the Alberta legislature. The event was initiated through Citizens for Public Justice, a non-profit faith organization whose vision is to “seek human flourishing and the integrity of creation as our faithful response to God’s call for love and justice.” The current executive director is Willard Metzger, former executive minister of MC Canada.

The event included approximately 300 people from many different faith backgrounds, including Christians, Jews, Muslims and Buddhists. Indigenous drumming, singing and praying by candlelight were all part of the evening. Participants walked through four stations representing mourning, repentance, gratitude, and hope and action, on the front steps of the legislature, where they were joined by all the children, for a shared liturgy.

Working in the area of creation care can become discouraging, but Moyer said it was life-giving to get together with people of faith, “who have a common understanding that there is something sacred about the Earth, and that we all feel a deeply moral obligation to do something about it.”

Brian Ladd of Holyrood Mennonite Church in Edmonton said he was particularly struck by the comment: “For many of us, it’s easier to imagine the end of the world than the end of capitalism.”

Randy Haluza-Delay, a vigil organizer from Edmonton First Mennonite and Canadian Mennonite’s newest columnist, attended multiple events throughout the Week of Climate Action. He said that one of the main goals was to get people to realize the world is already starting to experience the serious impacts of climate change: “We are already 30 years past awareness. The world needs to take action, and as long as we keep delaying it, it becomes harder and harder to take any effective action.”

Young people today are very concerned about this issue, and many participants expressed their desire to support the movement. Moyer said that, while the older generation will soon pass away, youth are frightened because they will be in the middle of their lives when the planet will be affected: “Young people were born into a world with a problem they didn’t cause.”

The vigil “gave me a lot of hope and was a light in the darkness,” said Moyer, who also attended the Edmonton climate strike on Sept. 27. She said that it felt so different from the prayer vigil, with more yelling, shouting and even swearing.

Suzanne Gross, right, of First Mennonite Church in Edmonton, hangs out with Joanne Moyer, who biked to the Interfaith Climate Change Prayer Vigil on Sept. 22 in Edmonton. (Photo by Brian Ladd)