Confronting the fear of our history 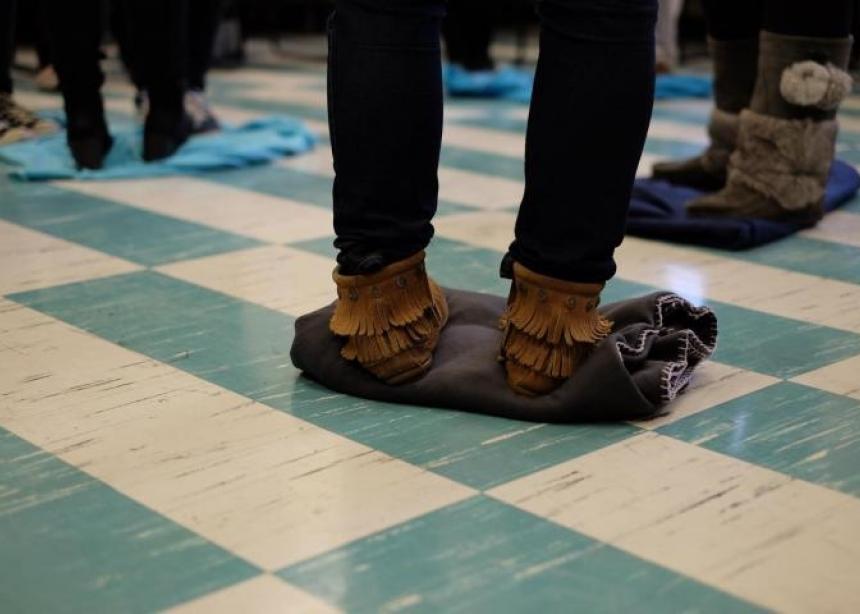 “Yet we Christians have also been called to take a good hard look at ourselves. To reflect on our Christian beliefs, to scrutinize our missional practices. And to decolonize. It’s not that Christianity is inherently colonial, but for generations the church and its faith have been used —wittingly, unwittingly, and far too often—as instruments of dispossession in the settler colonial arsenal. Indigenous peoples are asking the church to own our work, to beat our colonial swords into peaceable ploughshares.”

Steve Heinrichs, the director of Mennonite Church Canada’s Indigenous-Settler Relations Program, wrote this in Unsettling the Word: Biblical Experiments in Decolonization, a collection of Indigenous and non-Indigenous authors re-examining biblical stories in order to reclaim the Bible as a tool for peacemaking from an instrument of dispossession.

In the process of truth and reconciliation there is a great need for us all to critically analyze the forces that favoured Christian Europeans and their descendants over others. This work brings up hard questions concerning our identity and our justification for being on the land. When I look to my upbringing, Christianity was not perceived as an instrument of dispossession. Christianity brought community and belonging, but I was coming from a place of privilege and European ancestry.

In the early settlement of Canada, the government claimed it had the authority over the land to sell or grant it to settlers. The Doctrine of Discovery and Terra Nullius are concepts that the Eurpean powers used to justify the claim that land was theirs. These concepts provided a framework that said North America was open to be “discovered” because the Indigenous population wasn’t Christian and therefore did not rightly own the land. Theology was used to create a narrative that the land was empty and therefore open for foreign powers to come and claim possession, leading to genocide and exploitation.

For the healing of others and ourselves, it is absolutely paramount for us all to understand the entire story of how Canada was established and the role of Christianity in it. In my experience, destruction caused by Christianity is often ignored or hidden because of fear. This fear may be rooted in what these truths mean for our identity. This becomes especially difficult when our own histories are mingled with stories of fleeing persecution, hunger and violence, to find freedom in Canada. How do we reconcile it within ourselves that we have freedom in Canada but at the expense of Indigenous peoples? How can we do reconciliation work if we don’t address the truth of our history?

Good intentions are often clouded by privilege and ignorance of how oppression is ingrained into society for the benefit of some over others. Anthony Siegrist, pastor of Ottawa Mennonite Church, has researched and written about Mennonite involvement in the residential school system.

He writes: “[Mennonites] seemed sincere in their attempts to ‘improve’ the lives of their Indigenous students. Many staff sacrificed comfort and pay to serve as they did. And yet they were complicit. Probably naïve, but still complicit. If you know anything about Mennonite Christians, you may know that historically ours is a minority tradition, a tradition rooted in martyrdom. We do not always realize the power of our own cultural connections or the power of skin colour.”

The call for decolonization and a critical analysis of the role of Christianity in colonial history is a door that is often bolted shut because we fear what it will reveal about ourselves. However, this self-reflection is a healing process for us and everyone living on this land. Christianity has been used for destruction. But faith can also invite us towards reconciliation, as we learn new ways of reading the Bible.

The church played an instrumental role in colonization and the dispossession of Indigenous peoples—no matter what the intentions were—so we all must work to decolonize. The Truth and Reconciliation Commission’s 94 Calls to Action challenge us to do this.

Action 49 states: “We call upon all religious denominations and faith groups who have not already done so to repudiate concepts used to justify European sovereignty over Indigenous lands and peoples, such as the Doctrine of Discovery and Terra Nullius.”

It is time for us to recognize the colonial swords that we all carry and to beat them into peaceable ploughshares to till fields of truth and reconciliation.

Charity Nonkes wrote a longer version of this op-ed piece for the Mennonite Central Committee Ottawa Office’s blog while serving as an intern there earlier this year.