A Canada committed to genuine and mutual relationships 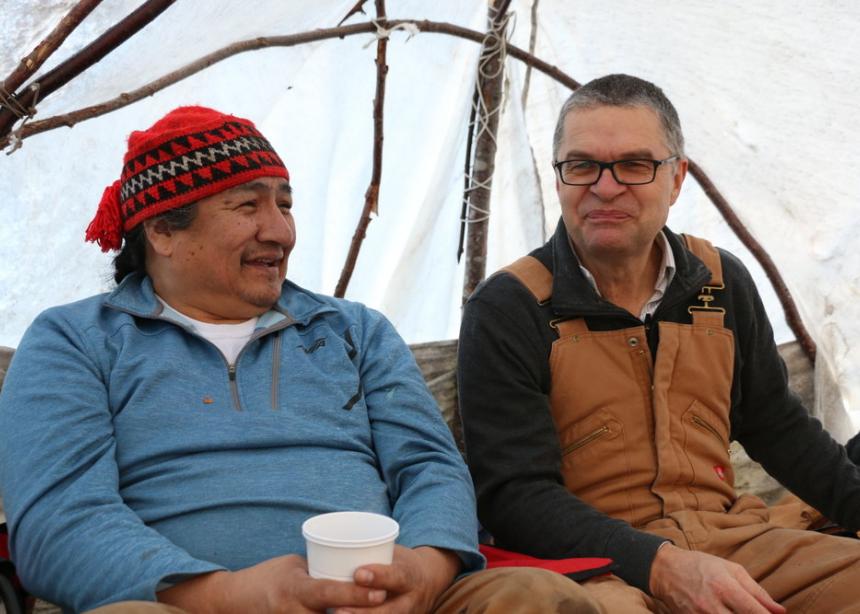 Mennonite Central Committee shares God’s love and compassion for all in the name of Christ. We have a vision of communities worldwide in right relationships with God, one another and with creation.

Sometimes we share God’s love through an emergency food response to disaster. Often, we seek right relationships by working alongside partners in community-based, on-the-ground development.

But sometimes, as for two days in late March, sharing God’s love, and building right relationships means being in Ottawa with other senior church leaders encouraging Canadian senators to support a Canada where engaging justly with Indigenous peoples is part of our identity.

I am deeply grateful for my own opportunities over several decades with MCC to work alongside Indigenous communities from Six Nations in Ontario to Sheshatshit in Labrador. I appreciated the gift of working alongside these Indigenous partners in building life-giving relationships and supporting healthy livelihoods.

But sometimes we are also called to help shape and transform our society and the space in which these relationships exist. Some readers will remember the old “teach a man to fish” narrative. Of course, we know that many Indigenous people are accomplished harvesters and if anything, they taught us newcomers and settlers to fish. However, centuries after settlers arrived there are now lakes and rivers to which Indigenous people may have no access. Or if they have access, the body of water does not support healthy fish.

Then what is our response to God’s call to love our neighbour? Might we then need to ask how bodies of water are managed and governed and for whose benefit? How is it that the benefits of resources from these waters and surrounding lands have largely flowed south and into the hands and homes of newcomer and settler Canadians?

Canada is presently considering adopting the United Nations Declaration on the Rights of Indigenous Peoples (UNDRIP). The bill to do so, C-262, is currently in the Senate. C-262 is not a formal treaty, but it would change how we share not only the fish, but the many other resources God has placed among us. It would call us to develop consistent and predictable methods of seeking and gaining meaningful input and consent on major development projects that impact Indigenous lands. These are principles that already exist in Canadian law. C-262 will help provide a roadmap on how to implement these principles well.

I considered it an honour to join with our sisters and brothers from the Quaker, United Church, Anglican and Presbyterian communities to meet with four senators and their staff to share how Bill C-262 would provide an excellent framework for reconciliation in Canada’s future. Several of them noted how many letters of support for UNDRIP they had received…kudos to the many of you who wrote to them already!

Three things have stayed with me since our “meet the senators” tour.

First, I was struck again by the very critical role the Senate plays in this and all legislation, and thus was reminded of the value of MCC and the churches investing in relationships with senators.

Second was the clear sense that the Declaration is not taking Canada into a strange and completely uncharted space, but rather it continues in the direction we have slowly been moving with the TRC, toward a Canada where first peoples and settlers are committed to genuine and mutual relationships.

The third, and more troubling reality, was that the clock is running down very quickly on the possibility of this important act of reconciliation becoming a reality.

MCC, along with other faith bodies, recently signed a letter sent to all senators, stating “Indigenous peoples are calling Canada to a path of mutuality and authentic relationship. Non-Indigenous Canadians of all ages and backgrounds are asking the Federal government to honour Indigenous peoples’ human rights. The Senate holds decision-making power to bring Canada closer to honest and fair relationship. Please support Bill C-262.”

We invite you to have your voice heard, too. We are now within a few weeks of this legislation needing to pass before an election is called and the bill dies. This is an opportunity for us to slightly but meaningfully shift the trajectory of harmed and hurting relationships. Senators are paying attention to the messages they receive; let’s continue to motivate them to act.

I invite you, even if you already have written, to use the highly effective “write the senators” tool to encourage the Senate community to support Bill C-262, and to move Canada closer to the community we long to be.

Send a message to the senators today.

The possible non-passage of Bill-C-262 may well be the least of our worries come Oct. 21.

The current government really needed more than one electoral mandate to make meaningful progress on "reconciliation" with Indigenous peoples. But partisans of every stripe have been working since the beginning of the 42nd Parliament to undermine and defeat a government that has been moving in the right direction when it comes to redressing historical wrongs.

It's frustrating to watch "progressive" church leaders, along with many urban Idle No More folks, make Bill C-262 the main focus of their collective energies—as if passage of this bill will magically make 141 years of colonial Indian Act governance disappear. Meanwhile, a serious and informed engagement with what policies, laws, governance and economic measures are needed to replace the Indian Act is missing in action.

Despite what we might hear from some quarters—that passing Bill C-262 is the most earth-shaking, radical piece of "reconciliation" work in a generation—it actually fits very well into the timeworn colonial tradition of letting the courts decide on matters that rightfully belong in the political and legislative realm.

Blakes, a leading law firm in Canada, has noted that the bill in its current form gives no legislative guidance on two very important aspects of UNDRIP. One is a timeline for implementation, and second is free, prior and informed consent. Blakes notes that this absence of guidance "risks leaving to the courts the ultimate task of interpreting UNDRIP and reconciling it with Canada’s existing constitutional framework."

One thing we know for sure: If Bill C-262 passes, there will be full employment for the next generation of lawyers.

An introduction to dismantling the Indian Act: http://nationalmagazine.ca/en-ca/articles/law/opinion/2017/decolonizing-...

Bill C-262, The UN Declaration on the Rights of Indigenous Peoples Act, is being championed by a wide array of Indigenous organizations and leaders, including the National Centre for Truth and Reconciliation, the Union of BC Indian Chiefs, the Grand Council of the Crees, the Native Women’s Association of Canada, and Justice Murray Sinclair (the former chair of the TRC). 262 - a direct response to Calls to Action 43 and 44 of the TRC - is also being supported by a diverse set of non-Indigenous organizations, including Amnesty, KAIROS, the Quakers and various labour unions. There are very good reasons for this. To discover why, I encourage you to check out the following website which includes both basic info on 262 and the Declaration, and detailed/technical responses to some of the misperceptions that surround the Bill and its impact (or supposed “lack thereof”): www.declarationcoalition.com

Rick Cober Baumann speaks repeatedly to MCC and Canadians in general, committing to building right relationships and sharing God's love with Indigenous peoples of Canada. He stresses this should be done in conjunction with the recent TRC report and Bill C-262, which is in danger of not being passed through the Senate by late October 2019. I agree with Mr. Cober Baumann that supporting Bill C-262 is a positive action on the part of MCC and settler Mennonites.

Mr. Cober Baumann seems to ignore creating a just relationship between settler Mennonites and Indigenous peoples by ignoring that we settler Mennonites were a part of a huge injustice; we have benefitted from the avails of stolen land. Mr. Cober Baumann seems to be content to let governments solve the problems of injustice. Once again it becomes an "Indian" or a government problem, however as far as I am aware, the Government of Canada relationship with Yahweh is not necessarily always front and centre.

I believe that first and foremost, Mr. Cober Baumann should be focused on right relationship between settler Mennonites and their God. Our God is a God of justice, demanding justice even from and perhaps especially from God's people. If we are a people of God, then indeed, the first call to justice must resonate in our churches, and must be proclaimed by our leaders. Then we can begin to build right relationship not only with our God, but with Indigenous peoples as well.

I find it offensive that the prejudicial term 'settler' is used again and again.

I was born here, and raised on the banks of Fishtrap Creek. The grass that fed the beef that we raised and butchered and ate was nurtured by salmon and alluvials deposited every year. I am native to Fishtrap watershed and live within the watershed today. I do not need someone who has never eaten from the grass or sheltered beneath its trees to tell me I am not a Mennonite, not Aboriginal... unless i am not included in this grace we know as Mennonite. Is this reconciliation, is this inclusion?

These comments made in the Canadian Mennonite are deeply offensive.

This desire to wield public influence and political power by leaders within MCC Canada and MC Canada without an electoral mandate is deeply troubling.

Bland motions are passed by assemblies that represent less than half of our congregations and then these actions are taken. The result is that politicians ignore our leaders, or worse use them for political fodder knowing the mandate they have is suspect and weak.

The net result is that our witness as a church body is diminished.

To clarify, I support passage of Bill C-262. Just wanted to register my frustration with the lack of attention being paid to a much more important issue, namely how do we get out from under the Indian Act and move towards independent self government based on a nation to nation negotiation.

For this to happen we need to become engaged with the work of the recently created Crown Indigenous Ministry. In its brief existence it has been consulting with Indigenous communities across the country and recently released a document called Recognition and Implementation of Rights Framework. This document has been rightly condemned by a broad swath of the Indigenous community. Some have called it Indian Act 2.0. Clearly much more work needs to be done and there won't be enough time for any meaningful redrafting before the fall election.

If current provincial voting trends are any indication we may see a change of government at the Federal level as well, a change that will not bode well for Reconciliation. In Ontario where I live, the provincial government just cut the Indigenous Affairs budget by 50 percent.

This is a good backgrounder to my perspective:
http://policyoptions.irpp.org/magazines/october-2018/ottawa-must-talk-to...