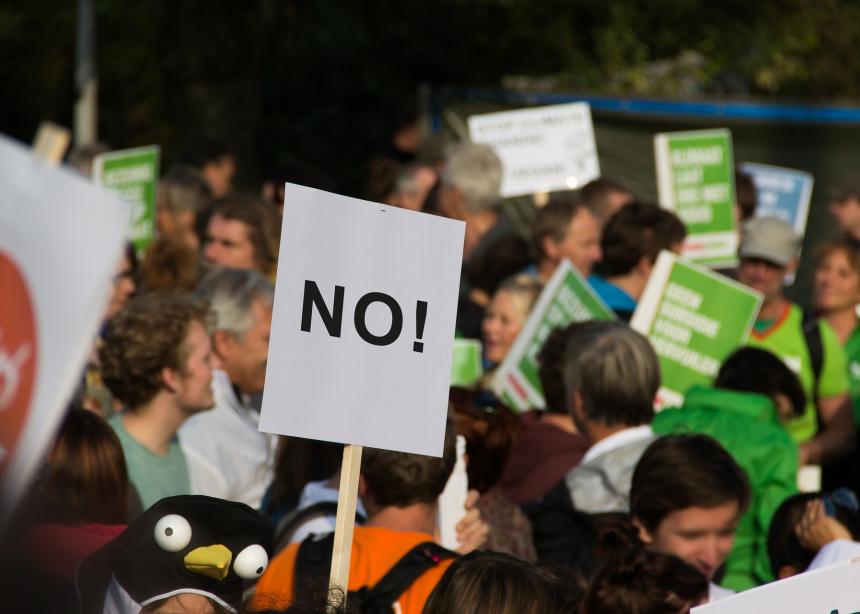 I smiled seeing a friend post on Facebook, tongue firmly in cheek, that civil disobedience is fine as long as he agrees with the issue.

I’ve participated in my share of protest marches: anti-nuclear weapons, anti-war, anti-racism, anti-colonialism and anti-fossil-fuel pipelines. My first adult act of defiance was in the mid-1980s, when the South Africa Council of Churches supported the global boycott of South African products. It felt significant to me that this boycott was being called for by the church, by lots of churches together, in spite of the impact it would have on their own members. I remember a long conversation with a friend who did not agree that this was an appropriate action for a Christian. We disagreed, but it did not change our relationship.

Questions arose about when might a church agency, or church, endorse civil disobedience? Discussions included those who were against civil disobedience in principle, as well as those who believe that civil disobedience must always be an option for Anabaptist Christians. The boards found a way to agree on policy, and respected the debate. The consensus standards are very high for an MC Canada stance on civil disobedience, which makes me admire even more the South African Council of Churches’ stance 40 years ago.

I became quite involved in MCC’s complicated relationship with Iranian clerics in the early 2000s, in both MCC Ontario and MCC Binational. There were many people who could not accept that MCC staff were in dialogue with Iranian clerics or the president of Iran, which, in their minds, made MCC complicit with evil. And yet MCC understood that an unusual door was open, and that it should be used for dialogue instead of condemnation. This was not civil disobedience, but it certainly challenged western governments and public opinion on Iran.

The CEO of the Canadian Centre for Christian Charities posted a blog in February, outlining four different public-action tactics to use when in disagreement with legal authorities, moving from comply, to consult, to challenge, to disobey. He expressed no opinion on current affairs and gave an explicit message that Christians are called in different times and places to all four actions.

I learn from our culturally conservative Anabaptists (Amish, Old Order) that their bishops use several defining questions as they make decisions on church life.  One of them is: How might this technology strengthen or weaken our family and congregational life?

I think one of our defining questions is: How does this activity help us to better love God and love our neighbour, especially those who are marginalized and vulnerable? This is clear in the signs many of us still have: “No matter where you’re from we’re glad you are our neighbour.” This was well articulated in the MC Canada statement on “White nationalist symbols at ‘Freedom Rallies.’ ”

My hope remains multi-faceted. I hope that the church at its various levels will make space for individuals with prophetic voices. I hope that the church itself will have the courage to consult, challenge and disobey at appropriate times, whether this be around land defenders or freedom advocates. I also hope that our congregations will be healthiest when they are full of members who respect each other, even and especially when we disagree.

Arli Klassen is a member of First Mennonite Church, Kitchener, Ont., and can be reached at klassenarli@gmail.com.

Read more The Church Here and There columns:
Communion with creation
Dismay or hope?
Every tribe and language
Is that not us?
Weak ties matter