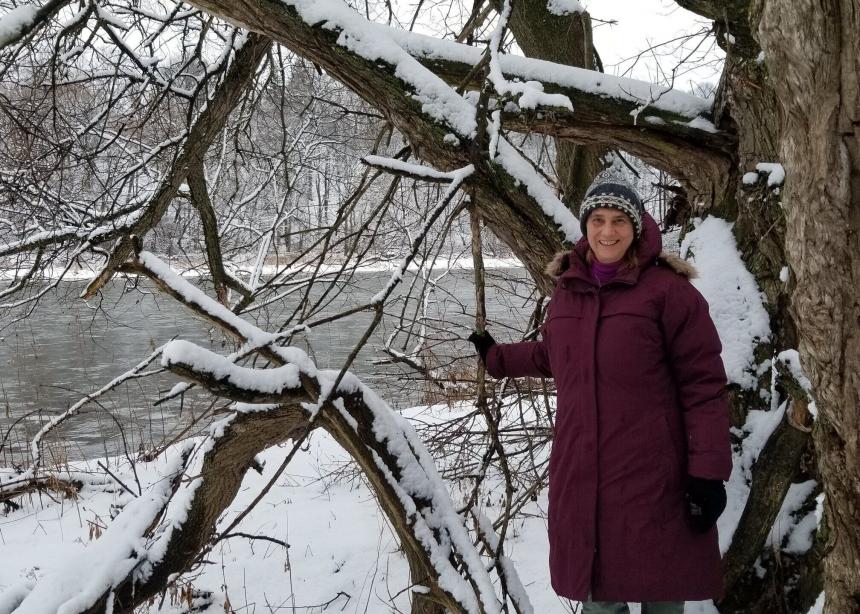 Arli Klassen stops for a picture by Grand River. 'I am learning to see who God is, and how God has revealed Godself to the world through the physicality of creation,' she writes. (Photo by Keith Regehr)

I’ve been pondering a new-to-me thought in the last few weeks. In reviewing the Scripture texts selected for Anabaptist World Fellowship Sunday this year, from the worship resources produced by Indonesian Anabaptist church leaders, I stayed with Psalm 104.

This thought expanded when Wendy Janzen, the new Mennonite Church Eastern Canada eco-minister, preached in my local congregation, and used the same text from Psalm 104. She expanded on the idea of creation being a witness, a testament to who God is, by calling us to be in communion with creation. How is one in communion with God’s creation?

I grew up in a camping and travelling family. I absorbed a love for the beauty and diversity of the physical world, a reverence for the Creator God. I learned to love being outside.

Living in Lesotho in southern Africa when our kids were little, we lived closer to the outside world than ever before. We opened our door when we got up, and closed it when we went to bed. Our dogs would lie right in the doorway, as close as they could get to being inside. Sometimes a praying mantis lived on the fridge, right beside the door, helping to keep annoying insects under control. Our children moved freely between inside and outside, with the whole of it being our living room. I loved it.

Maybe you can identify with living outside if you’ve lived in places that don’t have Canadian extremes. You will remember with joy the lack of barriers between inside and outside, while also remembering that walls and a roof are a privilege providing valuable protection.

I grew up thinking of spirituality as something rooted in my soul, ethereal and not physical. I am learning to see who God is, and how God has revealed Godself to the world through the physicality of creation. This is an easy step, given my love for the outdoors. It is an understanding that has never been forgotten by the Indigenous peoples of the land—to know that the earth and its creatures are holy. The whole created world is lit up with the power and presence of God.

It is harder to think about communion with creation. I have thought a lot about the ritual of communion as sacred liturgy, an act of worship and commitment. I have been thinking about our church as a communion, whether our regional church, our nationwide church or our global church. As gathered congregations, we are a communion, in communion with each other.

But communion with creation as sacred liturgy, as an act of worship and commitment? I found a sermon from Margaret Bulitt-Jonas, who says: “We were made for communion with God and each other and God’s creation, and it is communion that we feel when we gaze in silent awe at the sparkling river or the distant stars, and communion that we celebrate on Sunday. . . . Wherever we gaze, the Risen Christ is gazing back at us and his presence is flowing toward us. ‘Peace be with you,’ he is saying to us through hawk and wind, through tree and cloud and stars.”

So I am thinking about communion as worship and commitment, communion with our Anabaptist sisters and brothers, and communion with creation. We are bound together on this earth, as God’s creation.

Arli Klassen lives in the Grand River watershed, and is a member of First Mennonite Church in Kitchener, Ont.

Read more The Church Here and There columns:
Dismay or hope?
Every tribe and language
Is that not us?
Weak ties matter
What will church look like? 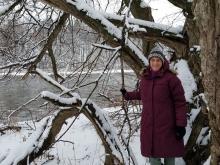 Arli Klassen stops for a picture by Grand River. 'I am learning to see who God is, and how God has revealed Godself to the world through the physicality of creation,' she writes. (Photo by Keith Regehr)