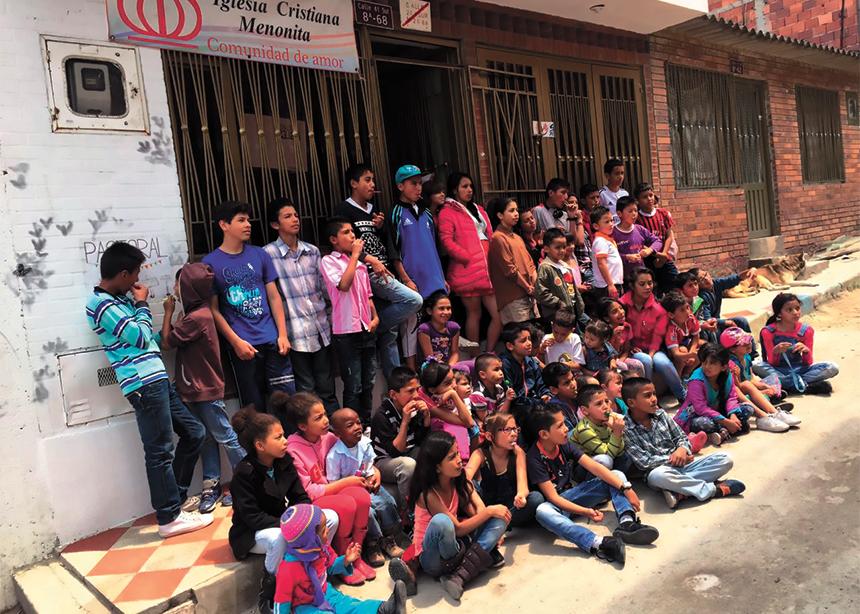 The Teusaquillo Mennonite Church in Bogotá, Colombia, provides food, programs and care for children in need, including those displaced by violence elsewhere in the country and Venezuelan migrants. (Photo by Jonathan Stucky)

Mennonites in Colombia and Canada are reinvigorating a 76-year-old relationship. It started last fall when Iglesias Cristianas Menonitas de Colombia (IMCOL)—the Colombian conference of 25 congregations—shared a statement about violence, suffering and peacebuilding with Mennonite Church Canada and others.

In addition to several video calls between leaders and others in the two countries in recent months, MC Canada recently sent a letter to Iván Duque, Colombian’s president, as well as a formal letter to IMCOL. Also in the works is a webinar in which people in both countries will share thoughts on how to address human rights violations in light of Jesus’ teaching to love our enemies.

The intent of the renewed collaboration is to learn from each other and walk prayerfully with each other in the various challenges we face.

Jeanette Hanson, director of International Witness for MC Canada, is leading efforts on the Canadian end, organizing a volunteer group that stewards the vision. That group is informally anchored by Robert J. Suderman, former head of MC Canada who lived in Colombia for many years, and Isaias Rodriguez, former treasurer of IMCOL, who now lives in B.C.

Hanson says Canadians have much to learn from their sisters and brothers in Colombia. Referring to numerous exchange programs and other involvements over the years, Hanson says, “There have been so many Canadians who have been formed in their faith journey by their connections to Colombians.”

Hanson, who recently tuned in to part of the IMCOL annual gathering, says of the Colombian Mennonites she has been connecting with: “I am so moved by how their work in peace and justice is completely wrapped up in their faith and spirituality. . . . [T]heir work in peace and justice is such an authentic expression of their faith. It is so beautiful to see. I want to learn to do that. I want that to transform my life.”

While the Colombian church is characterized by much more than its response to violence and suffering, the decades of turbulence in the country have given rise to a profound expression of Anabaptist faith.

A 2016 peace accord raised hopes of ending 50 years of bloodshed. It required the demilitarization of the Revolutionary Armed Forces of Colombia (known as FARC), which was the main armed insurgent group in Colombia. In exchange, the government promised massive investment in poor rural areas formerly controlled by FARC, and government incentives for farmers to grow crops other than coca, a crop used in the production of cocaine and a major source of financing for FARC.

The government was supposed to fill the void that would be left in FARC-controlled areas. In most cases that has not happened. Other armed groups now jostle violently for control, and coca production continues.

As of December 2020, Colombian Mennonites had reported 91 massacres, 249 people—including children—killed after laying down their weapons in compliance with the peace accord, and 310 civic and community leaders murdered, all in 2020.

In addition to those directly targeted, the persistent climate of violence and instability affects everyone.

Partly through Justapaz—the peace, justice and nonviolent action arm of IMCOL—the Colombian church documents human-rights violations, accompanies people in many of the most violent parts of the country, and supports a wide range of peacebuilding activities.

In response to the situation in Colombia and the work of Mennonites there, the MC Canada letter to the Colombian president urges him to “increase the progress on the implementation of the peace agreement . . . especially in land restitution and guaranteeing the social participation of ex-combatants, victims, and indigenous and peasant movements.”

It further expresses concern over the practice of spraying glyphosate to kill illicit coca crops. In reference to the collateral damage of spraying this herbicide, the letter to Duque states that the fumigation is “seriously affecting the health of your citizens—our brothers and sisters in faith—and the environment where they live and where they need to grow their food.”

The letter also urges protection for IMCOL and Justapaz leaders who were subjects of death threats from armed groups in 2020.

In its letter to IMCOL, MC Canada writes, “We have heard your call . . . to walk with you.” Echoing commitments in the IMCOL statement from last fall, MC Canada writes: “We walk with you in your commitments.” Those commitments include denouncing violence, teaching nonviolence, training members and leaders as “promoters and agents of nonviolent conflict transformation,” accompanying victims, inviting perpetrators of violence to repent; and practising solidarity by “doing what we can to bring better opportunities and improved living conditions.”

In addition to the letters, MC Canada recently passed on an urgent prayer request from Colombian leaders asking Mennonites to pray for evangelical churches in the municipality of La Tola Nariño in western Colombia, where hundreds of people have been forced to flee fighting in rural areas. One church is housing 12 families who fled with nothing. Some were wounded by gunshots as they fled.

For more information, or to become involved, email Jeanette Hanson at jhanson@mennonitechurch.ca. 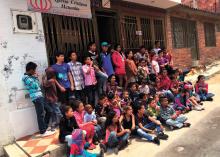 The Teusaquillo Mennonite Church in Bogotá, Colombia, provides food, programs and care for children in need, including those displaced by violence elsewhere in the country and Venezuelan migrants. (Photo by Jonathan Stucky)