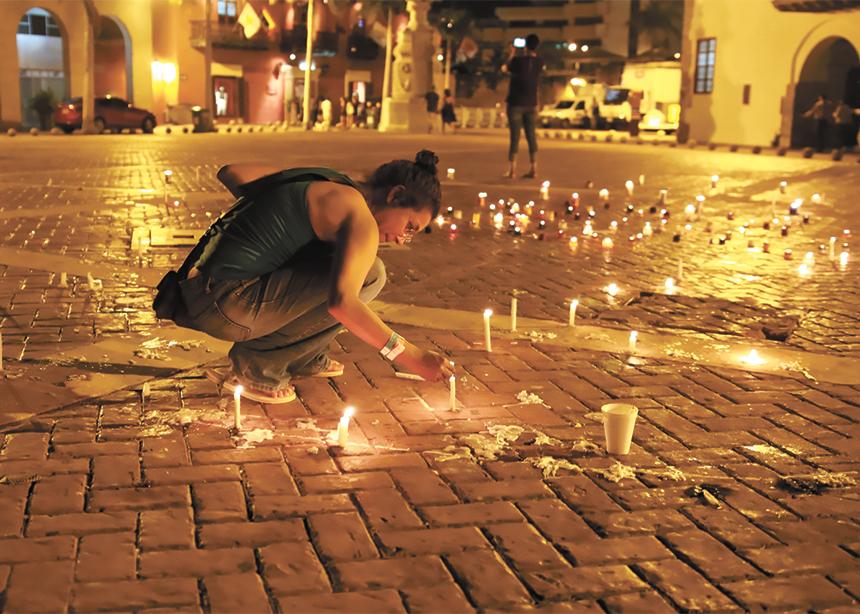 Candles mark the hope many Colombians had when a Peace Accord was signed in 2016. (Presidencia El Salvador Photo / Creative Commons)

Despite a landmark 2016 peace deal that held the promise of ending more than 50 years of violence in Colombia, Mennonites in South America’s second most populated country report that the conflict that affected more then eight million people—through killings, disappearances, threats and displacement—continues to claim more victims.

During a video call with seven senior leaders of the Colombian Mennonite Church and Justapaz—the peace, justice and nonviolent action arm of the church—I was told of 291 killings of civil and community leaders from Jan. 1 to Nov. 14, 2020. In addition, five churches were entirely displaced, three church leaders were killed, and 10 children of church families were forcibly recruited into illegal armed groups. In one case, children were taken from a sanctuary.

These were not Mennonite churches, but churches in areas where Justapaz works, at times in collaboration with the Evangelical Confederation of Colombia.

For security reasons, I am not using the names of the church leaders I spoke with. Justapaz, in particular, is the target of ongoing threats.

The organization accompanies churches and others in numerous parts of the country, including those regions most affected by the armed conflict. For 28 years, it has documented human-rights violations, accompanied people in danger and promoted peacebuilding initiatives.

Late last October, Iglesias Cristianas Menonitas de Colombia (IMCOL) sent a statement to Mennonite Church Canada, among others, about the violence in Colombia. In reporting the killings, it said, “Death has been sown, and with it, terror.”

The statement calls on the Colombian government to comply with the terms of the 2016 Peace Accord. It also lists seven calls to action for churches, including denunciation of violence, teaching nonviolence, accompanying victims, inviting those who commit violence to accept the gospel, and practising solidarity by working for the common good.

In stating that the gospel of peace can accomplish what weapons cannot, the document states: “Our clear and consistent message as churches will permeate the culture, the economy, the social relationships and the exercise of government in our country.”

IMCOL includes 25 congregations in various parts of the country, including areas marked by poverty, unemployment and social problems. A Mennonite Brethren (MB) conference in Colombia includes about 45 congregations. MB churches in certain regions of the country have suffered particularly acutely from the violence. I was told that one church was entirely displaced and children there were raped.

The promise of peace

The 2016 Peace Accord required the demilitarization of the Revolutionary Armed Forces of Colombia (known as FARC), which was the main armed insurgent group in Colombia. In exchange, the government promised: massive investment in disadvantaged rural areas that had served in part as a base for FARC; government incentives for farmers to grow crops other than coca, a crop used in the production of cocaine and a major source of financing for FARC; redistribution of land; a truth commission; and legal immunity for the majority of players in the conflict.

The Accord narrowly failed to gain approval in a national plebiscite, largely because of opposition to immunity for FARC fighters. The government of the time subsequently took measures to enact the Accord without a plebiscite.

Most FARC fighters turned in their arms, but the government failed to establish a strong presence in poorer rural areas formerly controlled by FARC. Without sufficient security, health services and economic development assistance in these areas, other illegal armed groups filled the void, jostling for control, since the Accord with FARC did not directly include the numerous other armed groups in the country.

In 2018, a political party that opposed the Accord came to power in Colombia, further muting the once-high hopes that many Colombians had for the ambitious peace process.

When asked for comment, the Colombian Embassy in Ottawa directed me to two Colombian government officials, neither of whom responded to the questions I sent via email.

Church on the front lines

With a presence in half of the 32 states that make up Colombia, Justapaz has a thorough process for documenting and verifying human-rights abuses. It publishes occasional reports, called “Llamados Proféticos” (Prophetic Calls). The most recent one is a 61-page document that includes theological reflections; detailed analysis of the impacts of the pandemic on the conflict; analysis of the concentration of executive power during the pandemic; and, the heart of the report, a summary of numerous specific cases of human-rights violations.

Each of the latter include: a name or names (sometimes altered for security reasons); the offence suffered; a date; a location; the presumed perpetrator, if known (names of numerous armed groups appear throughout the report); and a two- to three-paragraph description of what happened. Many note the association of the victim to a church. In some cases, entire churches are listed as the victims.

When the pastors of his church heard of this, they joined with community members to go looking for him. They found his body in a paddock.

The man travelled a lot for his work, and some armed actors in the area accused him of collaborating with guerrilla forces.

After his death, his pregnant wife’s health deteriorated.

He maintained sporadic communication with his mother but could not tell her of his predicament because of the threat that would pose.

One day, as he went to fetch water, he heard a military helicopter and ran out into the open, hoping to be spotted and rescued. Hearing a commotion, his captors came running, but the youth fled and was eventually taken in by military personnel. He then entered a government program of reintegration into society.

The children and youth of the five churches in the area were at high risk of being forcibly recruited by the armed groups for combat or to transport illicit substances and arms. One youth in the pastor’s church had to move after receiving a death threat. The pastor’s two teenaged daughters were also moved after receiving direct threats.

It is assumed there is an informant within the church community.

During my interview, the head of Justapaz shared one account after another of human-rights violations, including current accounts of threats to a well-known MB pastor. He spoke with specificity, concern and urgency. At one point, he mentioned that on that very day he was in another state to accompany a commission that was receiving five people leaving an armed group.

He emphasized that Justapaz also supports more than 50 peacebuilding initiatives, largely in churches. Faith communities are actively addressing the conflict.

On Dec. 11 and 12, 2020, Justapaz organized a national gathering of victims of armed conflict. The National Truth Commission—created under the 2016 Peace Accord—was present, and about 200 church leaders shared about how they have been affected and the efforts they are taking to address the conflict. This was a church contribution to the implementation of the Peace Accord.

For its part, IMCOL leaders have been in direct communication with government officials regarding the conflict. “Our role as church is to push government to take concrete actions,” one person told me.

The people I spoke with also expressed a wish that Canadians would make our government aware, partly because international attention can help provide protection for church leaders in Colombia.

“When the Mennonite family around the world knows what is happening in Colombia, that helps us to feel that we are not alone,” one leader said. Another encouraged Canadian Mennonites to also put into practice the seven points related to nonviolence in the recent Colombian church statement, as this helps to strengthen the international Anabaptist church.

The Justapaz spokesperson also asked for prayer as they accompany people in their pain and suffering.

The people Braun spoke with repeatedly expressed a desire for ongoing dialogue with Mennonites in Canada. For those who are interested, email Jeanette Hanson of Mennonite Church Canada Witness at jhanson@mennonitechurch.ca.

1. Have you ever been in a situation where you feared for your personal safety? How would you have responded if there had been no one to call for help and no law enforcement available to protect you? When people live in situations where killings, threats and displacements are common, how can they protect themselves while following the teachings of Jesus?

2. Justapaz, the peace, justice and nonviolent action arm of the Mennonite church in Colombia, has been documenting human-rights violations, accompanying people in danger and promoting peacebuilding. What peacebuilding initiatives are Colombian churches working at? Can you think of other ways they might promote peace?

3. Last December, Justapaz organized a national meeting of victims of armed conflict in Colombia, to hear their stories. Why is this an important step in peacebuilding? What can churches in Canada do to promote peace in their local communities?

4. Will Braun quotes a church leader in Colombia: “When the Mennonite family around the world knows what is happening in Colombia, that helps us to feel that we are not alone.” What are some concrete ways that the church in Canada can support the Mennonite Church in Colombia?

Related story:
‘For God all things are possible’ 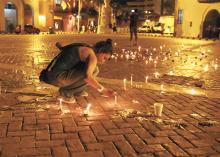 Candles mark the hope many Colombians had when a Peace Accord was signed in 2016. (Presidencia El Salvador Photo / Creative Commons) 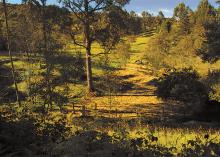