Being the church in risky times 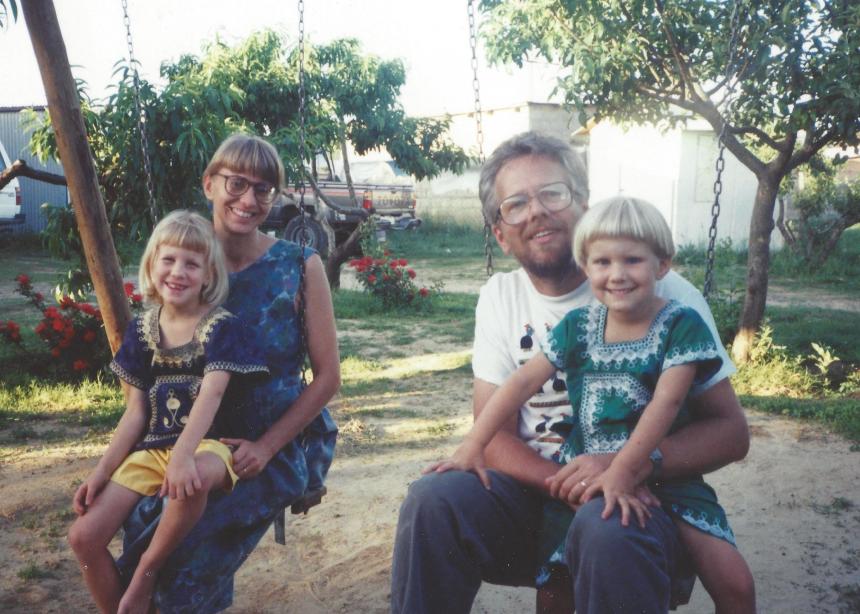 Arli Klassen and Keith Regehr with their children in Maseru circa 1993. (Photo courtesy of Arli Klassen)

As relatively privileged people living in Canada, there aren’t too many times that we think about whether this action or that action might result in our death. Living in these pandemic times, though, reminds me of our years living in southern Africa near the end of official apartheid. We thought often then of whether doing this or that might result in death.

We lived in Maseru, the capital city of Lesotho. We were “the white family” in our entire neighbourhood. Violence was rampant. There was the everyday normal threat of violence because our white skin indicated wealth. There was the growing internal violence in Lesotho, trying to elect its first democratic government in 30 years, with all major parties using their militias. Then there was the apartheid-era violence, mostly directed against white South Africans. Who was to know we weren’t South African, given our skin colour and very blonde children?

It was not safe to be out after dark. In our last year, we heard gunshots every night. Social unrest erupted several times, sometimes because of apartheid and sometimes because of Lesotho politics. We learned to live with risk and fear. We chose carefully about going to the grocery store, to the post office to collect our mail, about where we went and who we were with. We knew the stories of people who had died in each of these everyday places.

We were surrounded by good neighbours. We did not have big fences or guards, not in our part of town where no one did. When armed thugs went through our neighbourhood one night looking for white South Africans, all our neighbours said, “There is no one in this neighbourhood.” The next morning many came to check on us to make sure we were okay.

We were surrounded by the church. We represented the church through Mennonite Central Committee, and we worked in partnership with local church-based agencies addressing injustice and social change. Prayer and action were taken together, daily, hand-in-hand, to make explicit our Christian presence and approach.

There were days when I wondered why we were there and if we were making enough of a difference, or had enough to contribute, to risk our lives. Those continue to be difficult questions.

But we were surrounded, and so we kept going. We were supported as vulnerable people in the midst of a time of fear for everyone: neighbours, work colleagues and church. Sometimes it was hard to separate church from neighbours and colleagues because we were all part of Christ’s body.

Living in the midst of a pandemic reminds me of those times. Living with fear and isolation. Making decisions of where to go and who to be with. And yet we are surrounded by neighbours, colleagues and our churches. People looking out for each other. People taking care of each other. People reaching out especially for the most vulnerable among them to be sure they are okay. Being responsible within our context, taking risks to be the church.

This is our opportunity as the church today, here, there and everywhere. This is the witness of the body of Christ, the church, and has been for 2,000 years: that we love God and we love our neighbour as ourselves. Sometimes the church has had its most powerful witness during times of plague and illness. May our witness as the church be as strong today as it has been in times past.

Arli Klassen is working from home in Kitchener, Ont., and connecting via the internet, something they didn’t yet have in Lesotho.

Related stories:
The church has left the building
Beautiful and terrible connections
Fear not
'Greater love has no one...'
An open letter to the younger generation during this time of COVID-19

Read more The Church Here and There columns:
Partners in the body of Christ
'We discuss and we divide'
Canadian turkey and Salvadoran turkey
We belong to each other
Walking in the church

Arli Klassen and Keith Regehr with their children in Maseru circa 1993. (Photo courtesy of Arli Klassen)