Saskatoon baker uses bread as a vehicle for change 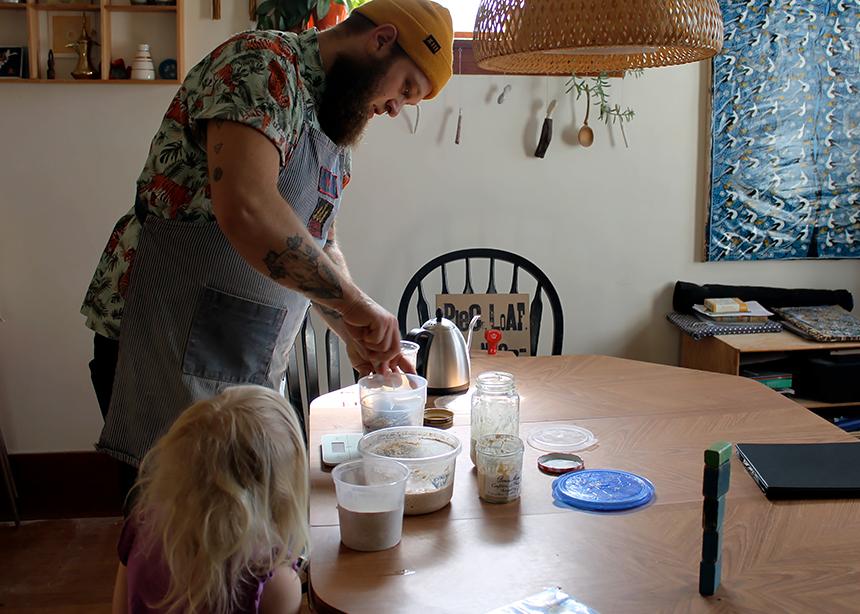 Baking bread is more than just a business for Joel Kroeker. It’s also a way to further important conversations.

With a deftness that comes from repetition, he slides another two loaves of bread into the oven. By the time he finishes for the day he will have baked 20 loaves and mixed another batch of dough for the next day’s orders.

“I do all the mixing by hand,” he says. “Today’s bake was 16 kilograms of dough. Each loaf weighs 800 grams before baking.” Although he has contemplated buying a mixer, he says, “I enjoy mixing. It gives opportunities to be mindful and meditative, and it engages the senses.”

Kroeker bakes only sourdough breads. His four starters are made from whole wheat, spelt, rye and white flours, respectively. He feeds them daily with flour and water, and lets them ferment in the fridge.

“Sourdough is sort of like a pet,” he says. “The bigger it is, the more you need to feed it.” For this reason he intentionally keeps the starters small, scooping out what’s not needed and storing it for later use in pancakes or waffles.

Prior to starting his own home-based business, Kroeker worked in a bakery. “It was a learning time for me,” he says. He acquired the basics of sourdough baking from a book but says that, while “books and videos are helpful, there’s something about working alongside someone and doing it over and over” that makes the learning more effective.

Last year, while working for the Night Oven Bakery in Saskatoon, he was asked to make 200 pizza crusts for a wedding. He saw it as a perfect opportunity to master the art of tossing pizza dough.

Bæker Kræker, as his customers know him, sells his bread by subscription. Most customers purchase one loaf a week, and he encourages them to subscribe for at least a month. Those who sign up for four months are invited to share a pizza meal with him and his family.

Many of his customers live in Kroeker’s City Park neighbourhood of Saskatoon, and drop by his home to pick up their loaves. About eight of his 60 subscribers “prefer the convenience of having it delivered,” he says.

When asked how his faith in Christ informs his business Kroeker, who attends Saskatoon’s Wildwood Mennonite Church, says, “The most visible way is in the issues that I’m highlighting.” He stencils a message on each loaf of bread he bakes. Those messages “stem from my beliefs,” he says, adding, “It all ties into my image of God and how the world was created to be. I don’t often make explicit my faith perspective. I don’t hide it, but, for me, my goal is to further conversations.”

Kroeker’s loaves have featured such simple words and phrases as “Peace” or “Let’s be kind,” but also more challenging messages, including “Implement UNDRIP,” “Basic income is dignity,” and, “Trans rights are human rights.”

“I’m taking sides, sometimes more strongly than others,” he says, “but I always want there to be room for everybody to have a spot at the table.” He adds, “Hopefully I’m leaving room and not coming at it from a place of holier-than-thou anger or judgment.”

Kroeker has been working with sourdough for about six years. Prior to that, he and his partner, Heather Peters, served under Mennonite Central Committee (MCC) in South Sudan for two-and-a-half years. “We came back early because I was not coping well,” he admits. “There was so much violence around, and I didn’t know how to cope with the stories I was hearing.”

Currently, Peters works as peacebuilding coordinator for MCC Saskatchewan, but Kroeker credits her with much of the organizational work for the business.

Some time ago, the couple presented a series of talks at a regional retreat for MCC workers. They entitled their talks “Sourdough spirituality.” He says, “Heather focused on trauma awareness and community-based coping strategies, and I talked about aspects of the breadmaking process as metaphors for spirituality.”

Social change, like breadmaking, requires patience. “You can’t force things,” Kroeker says. “It takes time, but you can push things along” by using warmer water to speed up the process. When it comes to social change, “you have to be present for those moments to know when it’s ready,” he says. “What I [try to do is] push things along, keep conversations going.” 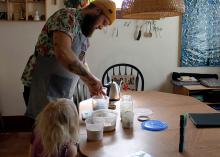 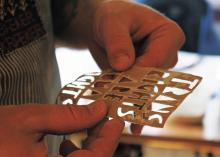 Each stencil Joel Kroeker uses in his breadmaking is cut free-hand from cardstock. (Photo by Donna Schulz) 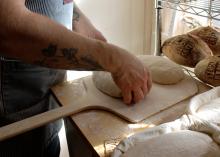 Joel Kroeker readies another two loaves of sourdough bread for the oven. (Photo by Donna Schulz) 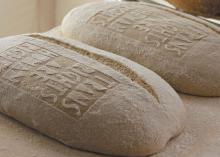 Each loaf is stencilled and then slashed to allow for rising while baking. (Photo by Donna Schulz)