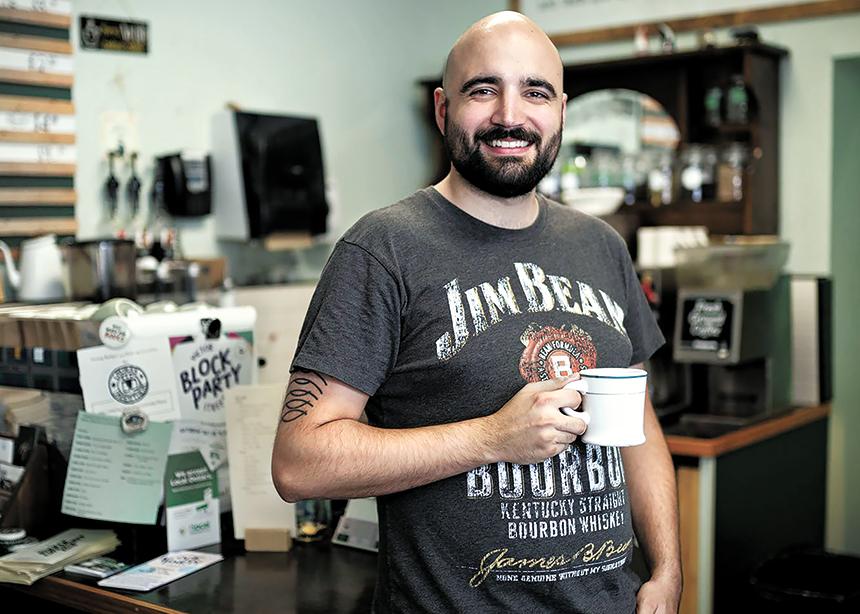 A couple of years later, the 29-year-old Winnipegger decided to put his money where his mouth was, and he opened Strong Badger Coffee in the heart of Winnipeg’s West End, the city’s most ethnically diverse neighbourhood.

Peters isn’t Mennonite by blood, but attended Westgate Mennonite Collegiate from grades 7 through 12, took part in the Canadian Mennonite University (CMU) Outtatown program in South Africa in 2009, and graduated from CMU in 2012.

He says his faith was formed, in part, during this time. And it was his faith that informed his decision to open Strong Badger.

Peters says the coffee shop was almost an extension of himself, a second personality. The name was even a combination of the Irish and Gaelic meanings of his name.

“It was a really personal endeavour,” he says. “I didn’t want to focus on maximizing turnover or anything. For me, it was to have the space, and develop the relationships in the space. The coffee was a vehicle for that. In a way it was a social enterprise being funded by the coffee shop.”

The space itself, a hole in the wall on Ellice Avenue, was very much to Peters’ taste. The chairs were mismatched, the tables were made in his dad’s garage, and it was cozy. “Some people say it was like walking into someone’s living room,” he says.

That helped foster a sense of community in which everyone—young families, low-income individuals or people who were just in the area and wanted a coffee—could feel comfortable.

Peters served quality coffee roasted in Manitoba at an affordable price so that customers, regardless of their income bracket, could feel comfortable entering the shop. Although it maybe didn’t make the most business sense, it made sense in terms of his values.

“My faith informed a lot of my approaches in terms of wanting to deal with people in a just way, in a humble way,” he says. “That was big for me, taking a humble approach to hospitality and creating an inclusive ethos.”

Strong Badger became a meeting place for people who maybe wouldn’t have spoken elsewhere. “Sometimes people from vastly different walks of life would get to know each other and develop that connection,” he says. “I had one regular who was on social assistance and had developmental disabilities, and one time he met the mayor [of Winnipeg, Brian Bowman] because he came in. Little things like that, people would never interact in real life, but in this place they’d sit across the table from each other.”

Although Peters found a loving, supportive community at Strong Badger, the business and the work involved took its toll. It was so connected to his identity that he spent between 60 and 80 hours a week there to keep it up and running. So, when his lease was up and he was asked to sign for another three years, he gave it some serious thought.

The end of an era

After three years in business, Strong Badger Coffee closed its doors to the public on March 16.

Peters says the decision was a difficult one, but a number of factors contributed to it.

“It was really taxing on my energy and my mental health,” he says. “But it was also too small. I was holding music nights and stuff, and it was packed in there. The practical considerations lined up with the personal ones.”

Since Strong Badger closed, Peters has spent most of his days moving out of the space.

“I actually just came from taking down the sign outside,” he says. “It’s been tough dismantling the dream. It’s been emotionally labour intensive. I’m pretty convinced it was the right decision for me, though it wasn’t an easy decision.”

Peters says he is going to work with a long-time customer and friend doing home renovations for the summer and decide where to go from there. “I’m looking forward to coming home at the end of the day with just paint on my hands,” he says. “I was taking so much of my work home with me before.” 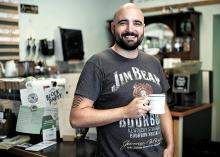