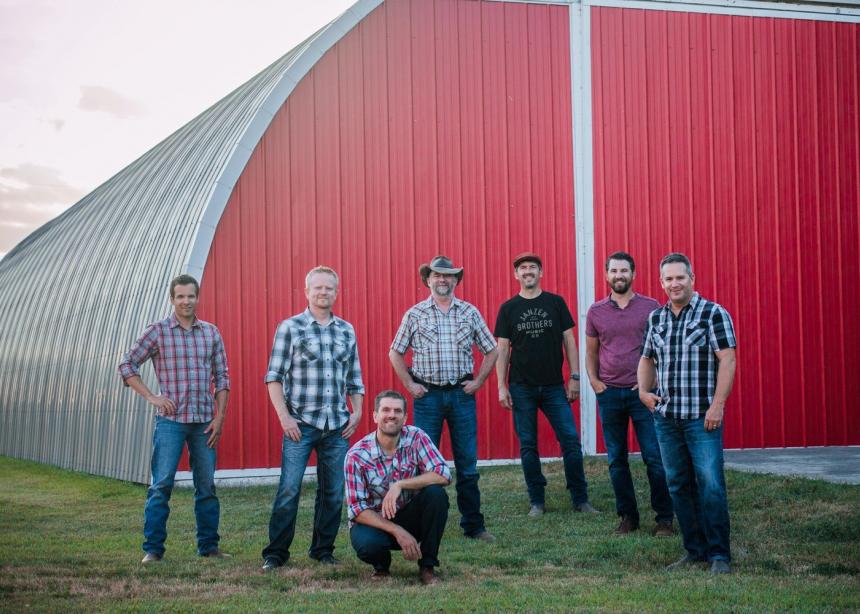 While there are Mennonites aulawäajen (everywhere) in Manitoba, Jeremy Giesbrecht and Darren Kehler of the Quonset Brothers have found that such is true internationally now that thousands of people have watched the video for their song, “Mennonites Put the Oba in Manitoba.”

Written by Kehler to the tune of a classic country song, the lyrics incorporate a variety of Low German words and phrases. The song’s video has been viewed more than 156,000 times since the seven-piece band uploaded it to YouTube at the end of October 2020. Winnipeg videographer Darryl Neustaedter Barg filmed it near Plum Coulee, Man.

“We’ve had comments from all over the world. It’s one of those surreal things, ‘cause we never intended it for that,” said Giesbrecht, the band’s bassist and member of Winkler Mennonite Brethren Church. “At least, my intention was just, ‘We’re just having some fun.’”

Giesbrecht believes that the song has resonated with so many people because they can identify with the aspects of southern Manitoba Mennonite culture that the lyrics talk about.

“So there’s, I think, a sense of belonging, or a sense of, ‘I can identify with this, and so I want to share it with others that have that same identity,’” Giesbrecht said.

The song was inspired by a T-shirt that Quonset Brothers drummer Jay Giesbrecht wore to a practice that said “Mennonites put the oba in Manitoba.”

“Something about the rhythm of the words reminded me of the Merle Haggard song, ‘Okie from Muskogee,’ and that’s the melody we use in ‘Mennonites Put the Oba In Manitoba,’” said Kehler, a seasoned singer in Mennonite Church Manitoba's Faith and Life Male Choir.

The Quonset Brothers formed in 2013 to perform at a wedding reception. It was supposed to be a one-off gig, but the band members enjoyed themselves so much that they’ve kept at it.

“So we just kept going [and] kept getting opportunities,” Kehler said.

The group is scheduled to perform at the P.W. Enns Centennial Concert Hall in Winkler, Man., on Wednesday, Oct. 5 at 7:00 p.m. Visit winklerconcerthall.ca for details.