Watch: A 2022 take on Jesus calling his first disciples 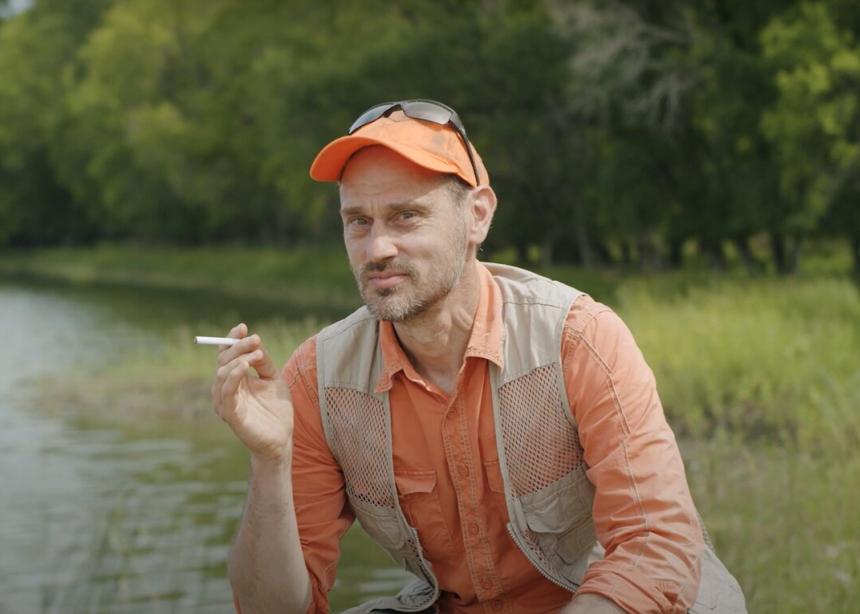 Arlyn Friesen Epp portrays a cigarette-smoking Simon Peter in “About those Fish…,” a short film he created for Gathering 2022.

One year ago, Mennonite Church Canada executive minister Doug Klassen asked Friesen Epp to produce a short film for Gathering 2022 in Edmonton, Alta., based on the story of Jesus calling his first disciples in Luke 5:1-11. The film, entitled “About those Fish…,” debuted at Gathering 2022’s Sunday morning worship session on July 31.

Friesen Epp, who wrote the film and portrays Simon Peter, wanted to help the audience re-enter the story and feel like they were experiencing it for the first time.

The Winnipegger’s creative solution was to give Simon Peter a modern twist: camouflage pants, a bright orange ball cap and a cigarette.

This interpretation of the biblical character made Friesen Epp nervous. He asked himself if he was stereotyping or if he would offend anyone with the cigarette. However, these feelings of doubt were overruled by his desire to break stereotypes.

“We have [stereotypes] of disciples as these clean, pristine people or something,” he said. “Whether we smoke or not, that’s irrelevant. It’s that we have our own crutches and our own coping mechanisms for whatever life throws at us.”

Those crutches can “make people stuck,” Friesen Epp said, and he wanted to show a progression of letting them go. So, he filmed four scenes: two with the cigarette and two without.

“There is a letting go and freeing oneself to new possibilities,” he said. “Everything shapes [us] and we’re going to carry things forward, but we’re also going to allow for new ways of shaping [so] that we’re not going to be stuck.”

Friesen Epp has long been passionate about drama and creative worship. Writing the video and filming it at Camp Assiniboia impacted his own understanding of the story.

“I see it as my own processing, as well as my gift to the church,” he said, adding that he will never think about this story the same way. “It’s always about, ‘Okay, fish for people,’ you know, like that’s the call. Then it clicked for me that, well, actually, Peter was fished like that. Peter is the fish.”

From now on, he said, “I will think of myself as worthy enough to have been caught.”

“About those Fish…” can be accessed for congregational and personal use at commonword.ca/ResourceView/82/25722.

Arlyn Friesen Epp portrays a cigarette-smoking Simon Peter in “About those Fish…,” a short film he created for Gathering 2022.