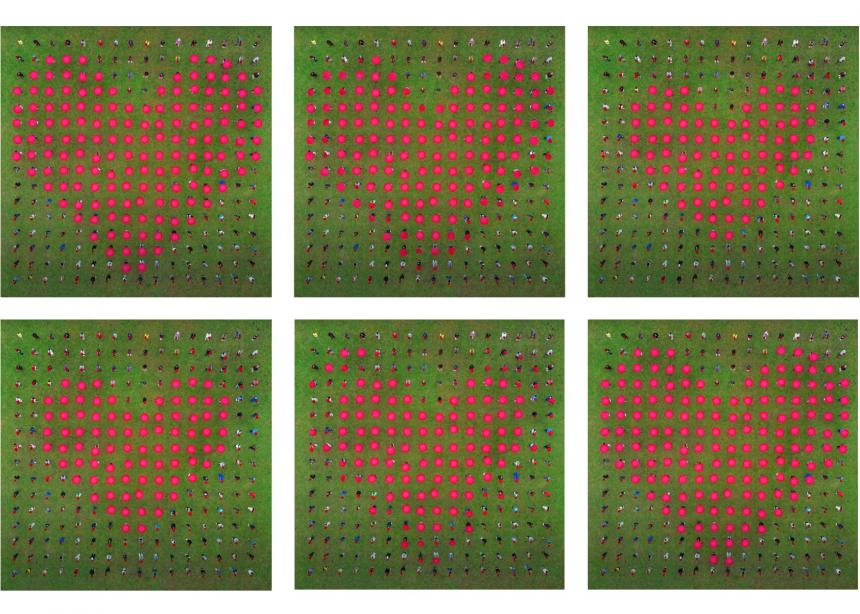 The students of Rockway Mennonite Collegiate coordinated to open and close their umbrellas to create a beating heart pattern.

What better way to bring a community together than 350 red umbrellas?

Starting at the beginning of COVID-19, Rockway Mennonite Collegiate in Kitchener, Ont ., has been working on creating a music video for “Someone to You” by the Banners. The result was uploaded to the school’s YouTube channel last month.

“I’m kinda the crazy one with the vision that drives these projects, and I’ve been lucky to have an administration that lets me run with them,” Sara Wahl, a teacher at Rockway, says. Over the years she has directed and produced several other videos involving students, teachers and staff.

“I thought it was maybe too ambitious and too expensive,” Wahl says of the most recent project involving 350 umbrellas. “But it was actually during COVID when our admin team said, ‘You know, we really need something.’”

When asked if she had a project idea for Rockway, Wahl said she did, but she didn’t consider it actionable until later when she realised the project was COVID-friendly.

“Producing it, we weren’t allowed to put more than 16 kids in a room together, right? How, possibly, could we create a sense of community with that as our reality?”

“But,” Wahl says, “one thing that I could do under COVID protocol was spray paint dots six feet apart on our back field, mask kids, put them outside, give them an umbrella [and] be together as a whole community.”

She adds that “If you had been new in grade seven or new in grade nine, or transferred in, there had never been a time where our whole school community was in the same space at the same time, and that [aerial umbrella] shot was the first experience for them.”

“Just watching kids being proud of something that they’re a part of, feeling a sense of identity, community, all those things—it’s hard to measure it. But I think it’s really real and very important.”

A behind-the-scenes video can be viewed at youtube.com/watch?v=D5-2eyWFlwA.

The students of Rockway Mennonite Collegiate coordinated to open and close their umbrellas to create a beating heart pattern.

Incredible video made by Sara Wahl and Rockway students -- brilliant response to the constraints of the pandemic. Great creativity and enthusiasm there!