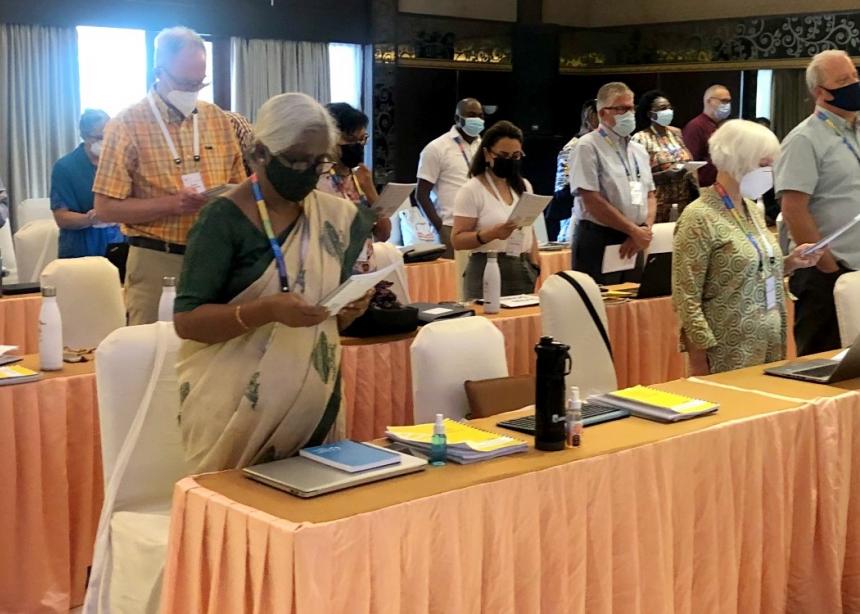 As the Muslim call to prayer wafted on the air through open doors, the General Council worshipped, prayed, and considered the global fellowship of churches in Mennonite World Conference. (MWC photo)

As the Muslim call to prayer wafted on the air through open doors, the General Council worshipped, prayed and considered the global fellowship of churches in Mennonite World Conference (MWC). The in-person triennial meetings of leaders of MWC national member churches in Indonesia in early July were cut short as COVID-19 positives put leaders into isolation.

After an unscheduled day of rest on July 3, the members affirmed the new commission chair appointments, new members on the Executive Committee (selected by regional caucus meetings), and the appointment of Lisa Carr-Pries of Canada as vice-president to finish the term of Rebecca Osiro, who stepped down due to family commitments.

The General Council authorized the Executive Committee to decide on the remaining proposals, with one member noting lack of support.

This brings global membership from 107 in 2018 to 109 national churches and one international association.

‘We cling to your prayer’

Each evening during Assembly 2022, Sunoko Lin led “life in the global church” where leaders shared, and the body prayed.

“We feel that we are the forgotten people and the forgotten country,” said Myanmar church leader Amos Chin when it was his turn to share. “The most difficult time and turmoil in Myanmar is the great door that God has opened for evangelization. This is the most rewarding time of our mission field. We don’t request financial support, but we believe . . . prayer can make a difference. We cling to your prayer.”

Former MWC general secretary Larry Miller offered a resourcing session on church unity based on Ephesians 1:9-10. “Nothing is outside the unity that will result from God’s grace—no person, thing, nothing,” he said. “May we in MWC be instruments contributing to, rather than stumbling blocks impeding, the unfolding and fulfilment of that divine plan.”

“Negotiation is always possible,” Klassen said, “but it helps the churches’ feeling about the amount when commitment is not too far away from assessment.”

She gave an example: “Like other member churches, Vietnam always met the Fair Share amount that they negotiated and promised, which was not quite the assessed amount for this term.”

MWC’s work is not primarily project-based, said Canadian Jeanette Bissoon, chief operations officer, in her report, therefore administrative costs tend to be high in comparison to other expenses. In this triennium, development staffing was increased, with a new strategy to raise more funds.

“Increasing the strength of MWC allows us to better support our churches to allow them to grow,” Bissoon said.

“It shows a historic connection to another body,” said Glen Guyton, executive director of Mennonite Church U.S.A., who withdrew from the military after becoming a Mennonite. “If I had something like that at my disposal, I would have put it in my packet. It helps.”

Faith and Life Commission commended the reception of the baptism report from the 2013-2017 trilateral dialogues with Lutherans and Catholics. “You have a job,” César García, MWC general secretary, said to the General Council delegates. “Study this document in your communities.”

John D. Roth, Faith and Life Commission secretary, reviewed the name change proposal. “There was positive response from the churches that asked for name change when MWC explained this process,” he said. General Council delegates are instructed to take the suggested name—Anabaptist-Mennonite World Communion—to their church leaders and to direct feedback to the Executive Committee. The name will come before the General Council in 2025 for final discernment.

As the Muslim call to prayer wafted on the air through open doors, the General Council worshipped, prayed, and considered the global fellowship of churches in Mennonite World Conference. (MWC photo)