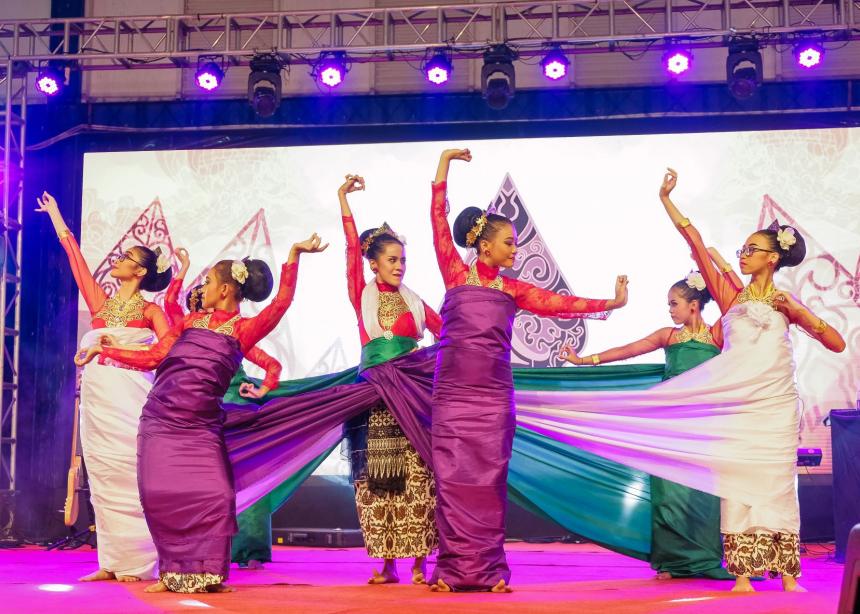 A colourful display of Javanese music, dance and shadow puppetry kicked off the Mennonite World Conference (MWC) assembly in Salatiga, Indonesia, on July 5.

Singing, prayer, a sermon about the mystery of the Incarnation and welcoming remarks from local Anabaptist church leaders were included in the opening ceremony and worship service, held at STT Seminary and streamed online.

“Welcome to Indonesia, my dear siblings. I am very happy to see you all in this place,” said Paulus Widjaja, chair of the assembly’s National Advisory Committee, adding that the COVID-19 pandemic delayed the assembly for a year.

“I have to confess that there was a time when I did not believe the MWC general assembly would happen at all,” he said. “And yet this evening we gather together in central Java to begin our journey together. We rejoice that we can be together despite the precautions that are still needed.”

Widjaja’s remarks were preceded by a performance of the gamelan, the traditional ensemble music of the Javanese people. The music accompanied women dancers dressed in traditional Javanese costumes performing a combination of dances from different parts of Indonesia.

Behind the musicians, a man performed wayang kulit, a traditional form of Javanese puppet-shadow play.

Representatives from each of the three Indonesian synods that are member churches of MWC extended their welcome to international visitors.

The opening ceremony concluded with a performance by JPCC Worship, a worship band that is popular throughout Indonesia. It is the worship band at Jakarta Praise Community Church, which is part of one of the synods that belongs to MWC.

As the evening’s focus turned to worship, members of the MWC General Council walked in front of the stage holding banners representing their home countries. More than 15 countries were displayed.

Following singing led by an ensemble of musicians from around the world, Lisa Carr-Pries, an MWC executive committee member from Canada, read a call to worship. “God has been preparing a place for us to gather here—a house of prayer, love and grace for all,” she said. “In the glory of God’s presence, barriers are dismantled. With joyful hearts let us worship.”

Tim Geddert, a New Testament professor at Fresno Pacific University in California, delivered a message about the mystery of the Incarnation—Jesus Christ’s full humanity and full divinity. He called the Incarnation a barrier-crossing event and challenged listeners to learn what it takes to cross barriers and reach out with courageous faith to connect with the heart of Jesus.

MWC typically holds an assembly once every six years, but Assembly 17 was pushed back a year because of the pandemic. Assembly 17 runs until July 10 and features twice-daily worship, workshops, learning tours, and opportunities for discussion and fellowship. For the first time, people have the option of joining virtually.

In addition to Anabaptists from Indonesia, more than 500 people from around the world have registered to attend in person.