In Chad, water pumps and latrines provide life-giving water for tens of thousands in refugee camps 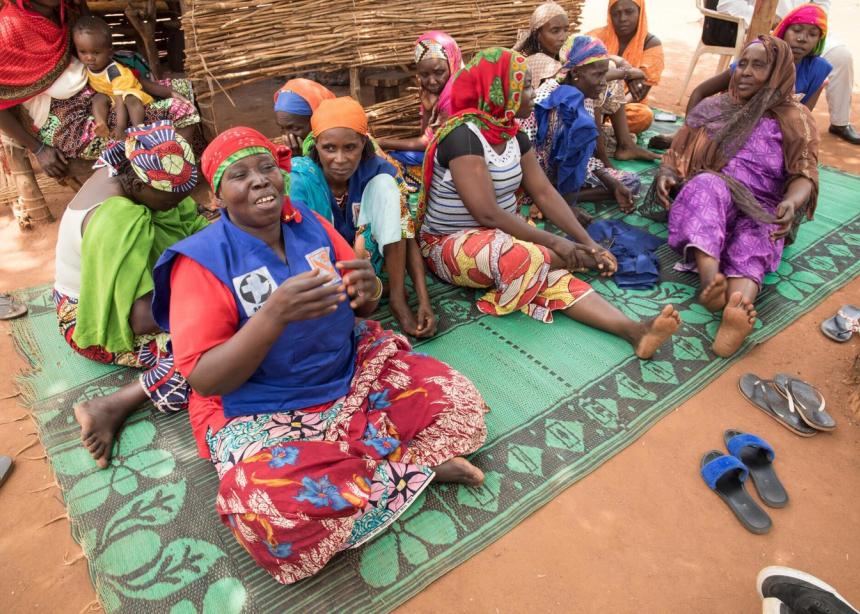 With a series of quick, practiced strokes, Aïchatou Hamidou clears the area around a newly built latrine with a long broom made from dry grass. After the trash and waste are swept into a tidy pile and safely disposed of, she unties the brightly patterned red handkerchief over her nose and mouth and adjusts the unmissable royal blue smock designating her as a member of the Wash, Sanitation and Hygiene (WASH) team.

Hamidou is the WASH team leader in Kobiteye, a refugee camp of more than 6,000 in Chad near the border of Central African Republic. She’s one of 24,000 refugees who are living in Kobiteye as well as two other government-built camps and a few dozen small villages in the area near the city of Goré.

These three camps are the site of a planned centennial project by Mennonite Central Committee (MCC), in partnership with Catholic Relief Services, that provides support to the WASH team by making sure everyone living there has access to safe, clean water.

When the camps were first built in 2013, builders dug open-pit wells, which can easily become breeding grounds for unsafe bacteria and disease, especially when there are not enough latrines to properly support the population. MCC and Catholic Relief Services have begun work with leaders in these camps to install new sealed handpumps that draw water from much deeper underground that isn’t polluted by waste.

But contamination isn’t the only concern with the water supply in Kobiteye. Although the new pumps are a significant improvement, there simply isn’t enough water for everyone in the camp. The WASH team found that residents of the camp have access to 17 percent less water, on average, than the United Nations minimum standard for refugees in emergency situations.

In the sweltering heat, a lack of safe water often leads to arguments around the wells, says Hamidou. It’s not just the lack of water, but the feeling of hopelessness many refugees live with; there are very few opportunities to earn any income and nearly all other international relief support has dried up.

“[Catholic Relief Services] brought real change to our community,” says Hamidou. “They came and taught us how to deal with conflict better, so there’s much less quarrelling at the wells now. And more latrines and pumps mean people are living with better water and more hygiene.”

MCC is already working in Kobiteye and the other camps, Danamadja and Djako, but thousands of refugees in surrounding villages are still in dire need of WASH support.

The effort is a special MCC centennial project, and with increased support, Catholic Relief Services will be able to expand its work to the refugees who don’t live within the camps.