‘There’s enough for all’ 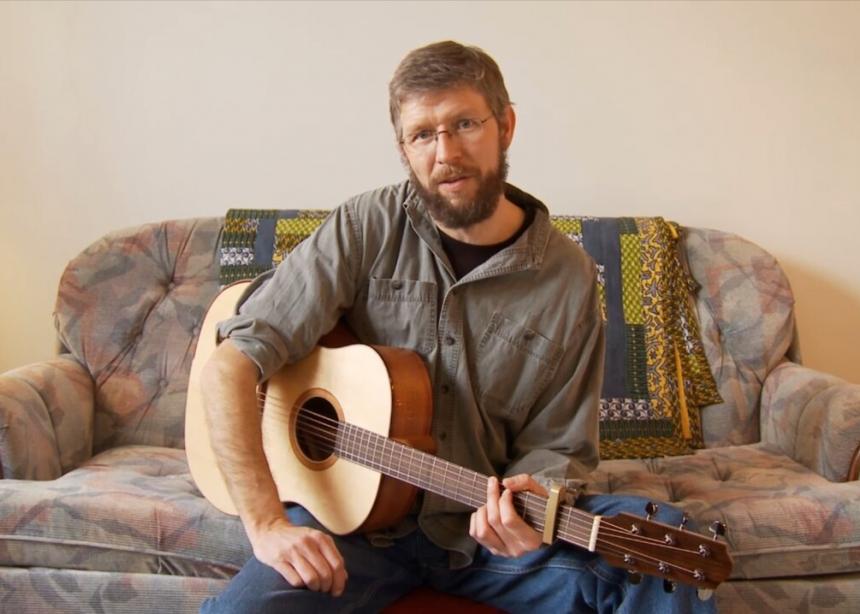 Bryan Moyer Suderman’s song “There’s Enough For All” is included in Voices Together.

“Jesus had a lot to say about money, but the songs we sing in worship rarely do.” These words from the album description of Bryan Moyer Suderman’s 2007 album, My Money Talks, provide a snapshot into the goal of the album: to intentionally provide songs for churches that help them talk about money. The songs on the album are written in a textually and musically accessible manner, providing musically accessible material with concepts that are stimulating for both children and adults.

The song is found in the “Giving” section of VT, along with 14 other songs. “There’s Enough For All” is a short song, written in unison over four lines. It can easily be repeated several times, making it a perfect fit to sing as the offering is being collected or brought forward during a church service. The Accompaniment Edition of VT also features a complimentary accompaniment, written by Charlene Gingerich.

Moyer Suderman currently works as an outreach worker at the Working Centre in Kitchener, Ont., a job he took on after spending almost two decades working and touring as a singer/songwriter and Bible teacher. On his compositional process for “There’s Enough For All,” he says: “This is a song I wrote while walking, if I remember correctly. It’s got a walking sort of lilt or gait to it, so it’s easy to sing and learn with some movement, with hand-clapping and/or percussion, and can be taught in a call-and-response ‘repeat after me’ phrase-by-phrase way.”

The accessible language and tune mean that this song could effectively be taught to congregations without even opening the hymnal. Song leaders can line out the melody and lyrics several times, and the congregation should be able to join in easily.

Moyer Suderman recalls two different sources of inspiration for writing the piece. First, it was written to address the theme of “Enough for All” chosen for Mennonite Church Canada’s gathering in Winkler, Man., in 2004. The scripture for the event was John 6, the story of the feeding of the 5,000. Moyer Suderman rose to the task of writing an accessible song that could speak to that story and be used at the event.

He also recalls an article by Walter Brueggemann as being particularly inspirational for the song. The article, called “The truth of abundance: Relearning dayenu,” offers a way of challenging the “myth of scarcity” with a “lyric of abundance” that believes that there is enough for everyone. Moyer Suderman’s song clearly captures this celebration of abundance.

On his goals for the song, Moyer Suderman says: “I hope this song can continue to help congregations articulate and practise the countercultural concept of ‘enough,’ to continue to be encouraged to practise generosity, and to make ourselves available for God’s purposes in the world.”

As many Mennonite communities face a season of tight budgets and even closed churches, the message of “enough” continues to be potent. “There’s enough for all, if we would learn to see.”

Anneli Loepp Thiessen is a PhD candidate in interdisciplinary music research at the University of Ottawa. She is co-director of the Anabaptist Worship Network and was a committee member for Voices Together.

Read more Voices and Stories columns:
Water music for the soul
Sharing across languages
A tune finds words
Going to the mountain

Bryan Moyer Suderman’s song “There’s Enough For All” is included in Voices Together.