Remembering the 1990 MWC assembly in Winnipeg

‘There is something spine-tingling about worshipping with 17,000 Mennonites from around the world’ 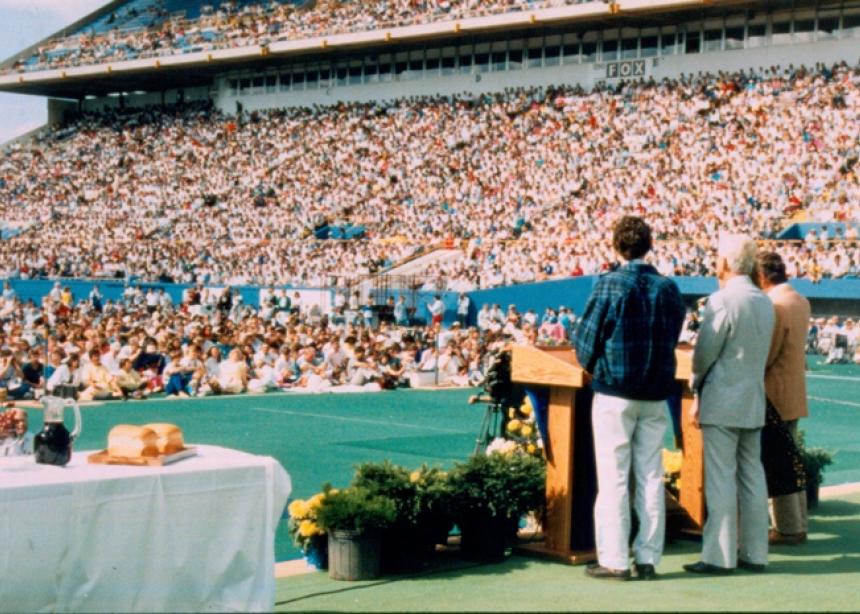 More than 20,000 Mennonites flocked to Winnipeg Stadium for the closing service of the 1990 Mennonite World Conference Assembly. (All photos courtesy of Mennonite Church USA Archives)

On this day 30 years ago, Manitoba Mennonites were playing host to a global assembly of Anabaptists.

The 12th Mennonite World Conference Assembly took place in Winnipeg, Man. from July 24-29, 1990. The once-every-six-years event drew more than 12,000 registrants, including 1,600 from nearly 70 countries outside of North America. The theme was, “Witnessing to Christ in today’s world.”

Every major meeting place in Winnipeg was used, including what was at the time the three largest: the downtown Convention Centre, Winnipeg Arena (home to the first Winnipeg Jets hockey franchise) and Winnipeg Stadium (where the Winnipeg Blue Bombers football team played from 1953 until 2012).

“There is something spine-tingling about worshipping with 17,000 Mennonites from around the world,” Margaret Loewen Reimer wrote in the Aug. 20, 1990 issue of the Mennonite Reporter (a predecessor publication of Canadian Mennonite), which featured extensive coverage of the assembly.

Loewen Reimer’s reflection was at times critical of the way worship was set up at the assembly, but she noted that all of the southern Manitoba Mennonites she spoke with were united in their praise of the event.

“Their horizons had been broadened by the exposure to many cultures and forms, and they felt deeply enriched,” she wrote.

Here are a few facts about the 1990 assembly:

Here are some photos from the assembly:

You can see more photos from the 1990 assembly here. The next Mennonite World Conference assembly is scheduled to take place July 6-11, 2021 in Semarang, Indonesia.

Were you at the 1990 assembly in Winnipeg? Share your memories in the comments.

More than 20,000 Mennonites flocked to Winnipeg Stadium for the closing service of the 1990 Mennonite World Conference Assembly. (All photos courtesy of Mennonite Church USA Archives)